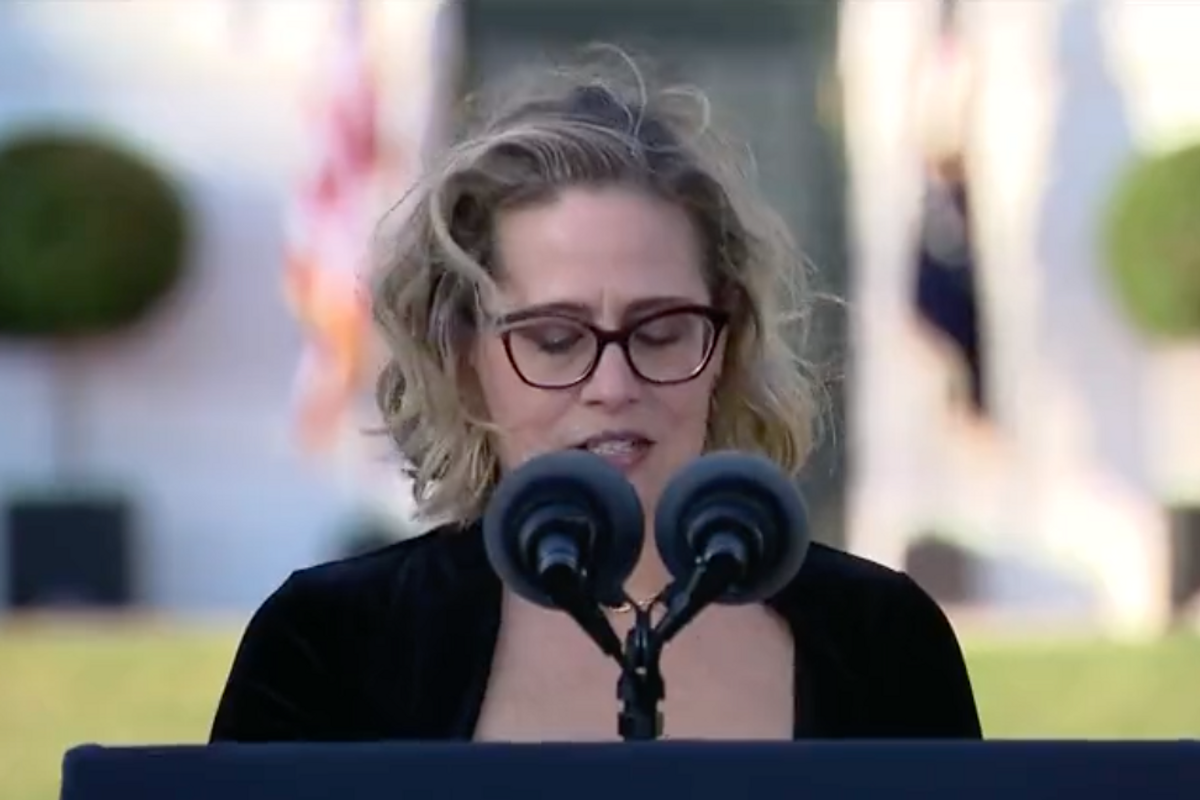 President Joe Biden signed the bipartisan infrastructure deal into law Monday, and there was much rejoicing, especially from Democratic Senator Kyrsten Sinema, who took the stage to declare BIF peace in our time.

Don't listen to this egomaniac prattle on. What have your ears ever done to you? We'll transcribe whatever's relevant below.

.@SenatorSinema: "How many times have we heard that bipartisanship isn't possible anymore, or that important policy can only happen on a party line? Our legislation proves the opposite, and the senators who negotiated this legislation show how to get things done."pic.twitter.com/vP0QKmlpc7

SINEMA: How many times have we heard that bipartisanship isn't possible anymore, or that important policy can only happen on a party line? Our legislation proves the opposite, and the senators who negotiated this legislation show how to get things done.

First place, Speaker Nancy Pelosi got this legislation passed. Period. Senate Minority Leader Mitch McConnell's contribution was agreeing not to filibuster the bill dead. When Pelosi was herding cats and making deals, Sinema pouted and insulted Democratic leadership from the comfort of her most recent big-money fundraiser. Biden's got a lot going on right now, so I'll cut him a little slack. But I'm still pissed that he gave this fraud a platform to promote her bipartisan fantasy island narrative that will only help elect more Glenn Youngkins next year.

Sinema is straight-up wrong when she claims BIF disproves that "important policy can only happen on a party line." This legislation is a Democratic achievement that a few Republicans hopped onto because it was in their best interest. Like Thomas Jefferson in Hamilton, Pelosi "arranged the meeting, the menu, the venue, the seating." Sinema's the annoying person at the party who prances around while her friend gets everything ready. Then once the guests arrive, she gives a long, self-congratulatory toast.

She fails to mention that Democrats needed control of the White House and both chambers of Congress to pass this legislation, and ultimately only 32 out of the 250 Republicans currently serving in the House and Senate supported the bill. That's pretty close to a party-line vote. McConnell is fine with stroking Sinema's ego if it means some much-needed scratch for Kentucky, but he's still blocking voting rights legislation and almost filibustered the nation into default.

House Minority Leader Kevin McCarthy would've killed the bill outright if he were speaker. Sure, some Republicans claim they couldn't vote for BIF because it was linked to reconciliation, which would've been a separate vote anyway, but most Republicans just couldn't allow Biden a win. It's impossible to imagine a GOP majority passing the bill or a GOP speaker permitting a vote on bill that would only pass with mostly Democratic votes.

While Sinema was taking her Ironman victory laps, McCarthy was fending off revolt from his caucus members who are less than thrilled with all this bipartisanship. Some conservative members of the House Freedom Caucus want to officially sanction the 13 members who broke ranks and voted for BIF. The caucus apparently has a selective definition of “freedom."

MORE NEWS from GOP meeting: Rep. Chip Roy and McCarthy got into a heated exchange, per source. \n\nRoy lamented that he has to now go back to his district and explain why people should bother voting Republican when they handed a victory to Dems, and argued leadership should act.

McCarthy would prefer Republicans remain united against the Democrats' Build Back Better reconciliation bill, but he sucks and no one cares what he thinks. Marjorie Taylor Greene claimed the GOP votes for BIF are evidence of McCarthy's weak leadership, and she wants the 13 “traitor" Republicans booted off committees, presumably so they can hang out with her doing nothing.

According to CNN's Melanie Zanona, Rep. Chip Roy flipped out on McCarthy during a meeting Tuesday because he now has to go back to his Texas district and tell them they're getting roads. I guess that's a problem. I haven't visited Texas in a few years. Maybe they hate roads now. He'll struggle to explain why people should even bother voting for Republicans when they handed a victory to Democrats. That's a revealing admission. The GOP literally has no platform other than “Democrats Are Bad." Roy must also struggle with math, because Republicans didn't save the bill, despite what some New York Times reporters might suggest. Pelosi can both count and lead. She would've delivered a party-line vote if necessary, but she'll probably just send the Squad flowers for making McCarthy's life miserable.

Greene, who's been in Congress for less than a year, isn't sure she can support former young gun McCarthy for speaker. She'll need to see some “changes." It's looking clearer each day that McCarthy is never gonna be speaker now, and we don't dare imagine what MAGA nightmare will replace him.

The current Republican party is an anti-democratic authoritarian cult of personality. That's the point Democrats need to make every day until the midterms. Kyrsten Sinema's vanity parade of bipartisanship isn't helpful and is almost more useless than she is.