Skip to content
A news story at Boston.com from August:

However that number has dwindled considerably since that time, he said, and he’s now considering a rebranding.

The Somerset store is set to close this weekend, and after it shutters its doors, Lambert will only have three left – one each in Easton, Bellingham, and Warwick, Rhode Island.

In the past, Lambert was running stores across Massachusetts, Connecticut, and Rhode Island. He also branched out into New York, where his stores conveniently took the name “New York for Trump.”

There’s been a variety of reasons why the stores have gone out of business, he said.

“It definitely slowed down after the election,” Lambert said.

Owner Keith Lambert told FOX Business he plans to expand his business into Salisbury and Cape Cod, Massachusetts – increasing his locations from eight to 10 to keep up with the demand during the Biden presidency....

Lambert has other locations in Bellingham, East Bridgewater, Easton, Somerset, and Warwick, Rhode Island, and a pop-up store that opens when the weather permits.

I've been skeptical whenever very smart pundits have argued that Donald Trump is gradually fading from the scene -- the most recent Reuters/Ipsos poll has Trump crushing a field of potential GOP candidates, like every other poll taken this year: 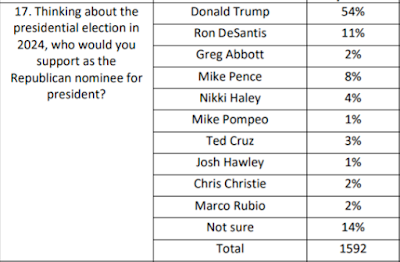 But while Trump might still be Republicans' preferred presidential candidate, he's clearly no longer their biggest source of fun. They've now found a way to obnoxiously own the libs that doesn't refer to him in any way. They get to be Trump now all by themselves!

They'll still need a presidential candidate in 2024, and he remains the strong favorite, but they no longer appear to need him as a tummler....

They can amuse themselves now, in their preferred anti-social way. They don't need Trump for that anymore.