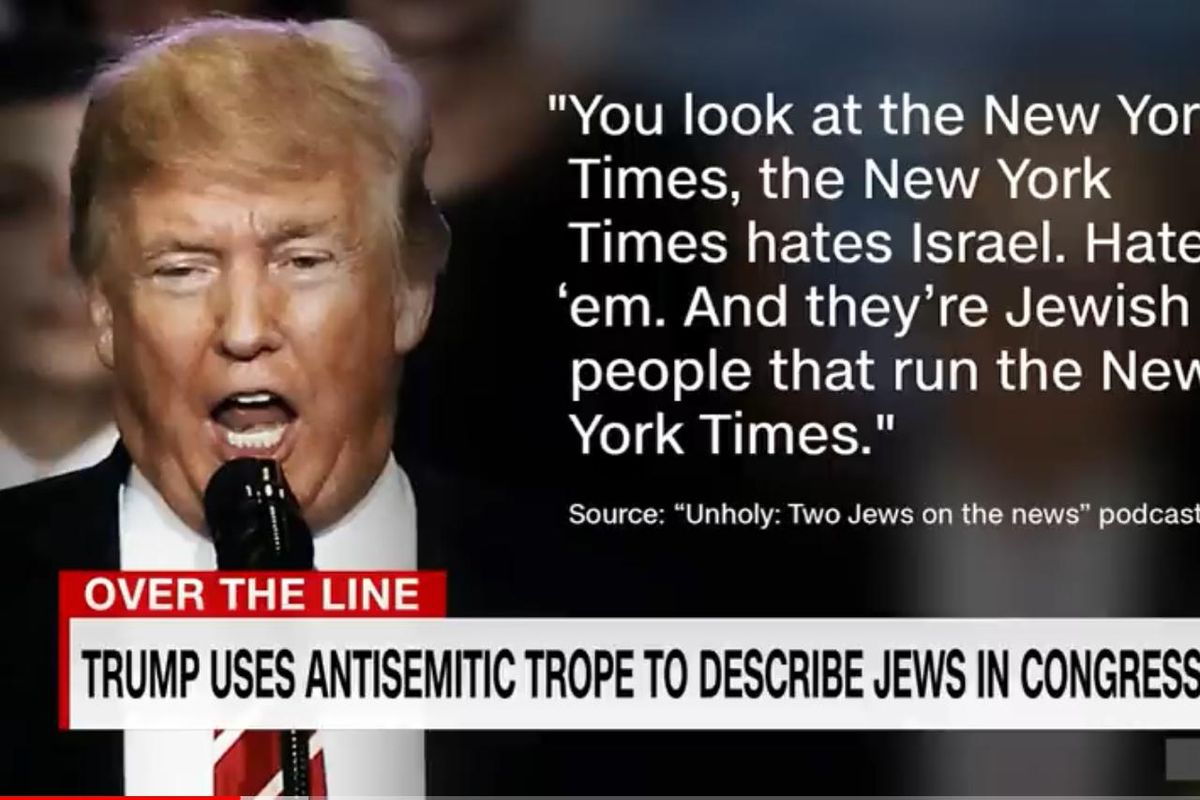 During a recent interview, Donald Trump told journalist Barak Ravid, who wrote the book Trump’s Peace, that American Jews aren’t sufficiently loyal to Israel, which is another country. The gross but not surprising remarks were aired during Ravid’s appearance on the podcast “Unholy Two Jews On The News.”

Here’s what the repulsive anti-semite had to say:

TRUMP: It’s a very dangerous thing that’s happening. There’s people in this country that are Jewish and no longer love Israel. I’ll tell you, the evangelical Christians love Israel more than the Jews in this country.

There are disturbing reasons behind evangelical Christians’ support for Israel, whose creation some believe is a fulfillment of prophecy. It’s fine if that’s why evangelicals are pro-Israel — everyone could use some prophecy in their lives — but it’s insulting to suggest that American Jews must subscribe to the same prophecies. Trump has repeatedly said that Jews who vote for Democrats are “disloyal” solely because of Israel.

Trump insanely claimed that Israel once had “absolute power over Congress,” but now those glory days are over because of Barack Obama and Joe Biden, who apparently made hating Israel great again.

TRUMP: Obama and Biden did that, and yet in the election they still get a lot of votes from Jewish people, which tells you the Jewish people — and I’ve said this for a long time — the Jewish people in the United States either don’t like Israel or don’t care about Israel.

Trump was accused of using “anti-semitic tropes,” but a trope is a figure of speech or rhetorical device that’s overdone. The “trapped in an elevator” sitcom plot is a trope. Claiming Israel was the unseen puppet master behind Congress is straight-up anti-semitism. Trump also dusted off the racist chestnut about Jews controlling the media. He said the New York Times “hates” Israel, which doesn’t compute for him because the paper’s publishers are Jewish (we’ll get to that later).

OK, Arthur Ochs Sulzberger was born to a Jewish family, but he hasn’t been publisher since 1992. His son and grandson have run the paper since then and neither consider themselves Jewish. It’s possible the bigoted anti-semite didn’t do his research.

However, the specifics probably don’t matter to Trump. “Sulzberger” sounds Jewish and the family has Jewish heritage. They’re all traitors if they don’t love Israel. Case closed. This deranged thinking reflects Trump’s ethnonationalism. Americans aren’t united by a common creed but racial heritage. It’s why he wanted to trade “dirty” Puerto Rico for Greenland.

And he’s not alone. Tucker Carlson and Laura Ingraham frequently argue that “those” immigrants will drastically alter America for the worse. This is how racists racist.


Trump is also a malignant narcissist, so he resents that Jewish voters overwhelmingly rejected him. According to the America Jewish Committee’s annual Survey of American Jewish Opinion, fielded before the election, 75 percent of Jewish Americans planned to vote for Biden and just 22 percent admitted they would vote for Trump. That doesn’t mean the Jews who backed Biden hate Israel. They probably just hate fascists more.

Jonathan Greenblatt at the Anti-Defamation League shared his disgust for Trump’s remarks.

Once again, former President Trump has linked his lack of strong support among most US Jews to their feelings about Israel and used classic antisemitic stereotypes about Israeli and Jewish control of Congress and the press to bolster his argument.

It's sad that once again we have to restate this point, but the vast majority of American Jews support and have some type of connection to Israel, regardless of which political candidate they vote for.

Let me be clear: insinuating that Israel or the Jews control Congress or the media is antisemitic, plain and simple. Unfortunately, this is not the first time he has made these offensive remarks.


Republicans won’t repudiate Trump and will likely continue claiming Democrats are the real anti-semites. The media is seemingly helpless against GOP hypocrisy and lies. However, we shouldn’t forget the obscene level of bigotry the Republican Party will both tolerate and enable.