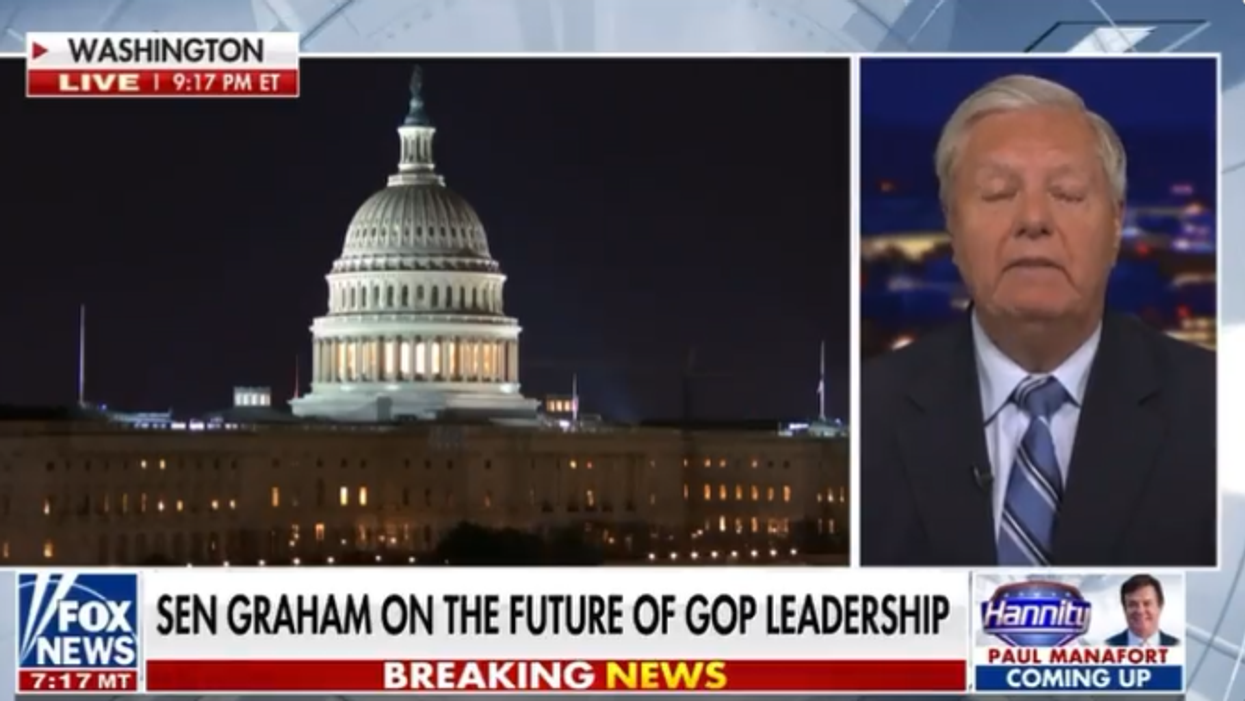 Last night, Lindsey Graham went on "Hannity" with his face looking all orange like some unethical doctor is giving him skin treatments to make him look disgusting like his boss daddy Donald Trump, and he delivered a warning to Senate Minority Leader Mitch McConnell: You better start bein' nice to my boss daddy! Or else!

Of course, the "or else" is the question of whether McConnell gets to stay the Republican Senate leader after the midterms.

In the segment above, Sean Hannity — one of the actual leaders of the GOP who gives the politicians their orders, like the Fox News hosts that come on before and after his show — expressed that he's been sorely disappointed with McConnell and his "game-playing" and "swampiness."

Graham agreed, and took that as an opportunity to slurp around Donald Trump's general buttocks area a whole bunch, because that is what the king of Mar-a-Lago requires.

It's impressive how many times he kisses the ring in just over 60 seconds:

GRAHAM: If you want to be a Republican leader in the House or the Senate, you have to have a working relationship with President Donald Trump.

GRAHAM: He's the most consequential Republican since Ronald Reagan.

GRAHAM: It's his nomination if he wants it.

GRAHAM: I like Senator McConnell, he worked well with President Trump to get a bunch of judges, including three Supreme Court justices, on the bench, they got the tax cuts passed working together, but here’s the question:

Hahaha, in what world did Trump do anything but sit there and look stupid while McConnell went about achieving what had been rightwing fascist Republican goals for decades? With the judges, the Federalist Society jizzed a bunch of unqualified children's names all over the White House Counsel's Office, Donald Trump stuck his tiny meat paw in a hat and picked some, and then McConnell spent literally all the Senate's time confirming them, to the exclusion of pretty much all other governing. This wasn't some kind of respectable process, and Trump didn't actually do anything as far as we can tell.

And what did Trump do to pass tax cuts? Seriously, what? Tell us about that planning session, when Trump executed an idea and Congress actually did what he said.

It's like Graham thinks Trump actually did the job of being president. What a sad, delusional fuck.

GRAHAM: Can Senator McConnell effectively work with the leader of the Republican Party, Donald Trump?

GRAHAM: I’m not going to vote for anybody that can’t have a working relationship with President Trump ...

GRAHAM: ... to be a team, to come up with an America First agenda, to show the difference between us and liberal Democrats, prosecute the case for Trump policies.

Trump policies. Not Republican policies. It's all about daddy. And that's eight.

GRAHAM: And I’m not going to vote for anybody for leader of the Senate as a Republican unless they can prove to me that they can advocate an America First agenda, and have a working relationship with President Trump, because if you can’t do that, you will fail.

No, your eyes are not failing you and we did not make a transcription mistake. Graham repeated himself almost verbatim, managed to once again incorrectly refer to Trump as "president," and kissed the ring about five more times in the process.

Many are noting that all this is a far cry from the brief glimpse of a Lindsey Graham with integrity we saw after Donald Trump's most devoted acolytes committed a terrorist attack to preserve Dear Leader's power on January 6. You know, the Lindsey Graham who told the Senate, "COUNT ME OUT! ENOUGH IS ENOUGH!"

Some people naively thought he meant January 6 had maybe snapped him back to reality from the fugue state he'd been living in up Donald Trump's asshole for the last five years. Some people were wrong. Graham was back to gargling Trump's backwash before we knew it, begging to get back into Trump's good graces, even as Trump has reportedly spent much of the last year very mad at Graham indeed.

Politico Playbook meanwhile notes that Graham's drooling on "Hannity" is interesting given that literally everybody knows McConnell hasn't talked to Trump since before the Trump-inspired attack, and also given how most GOP senators have stuck with McConnell on questions of McConnell's continued leadership position, which Trump would very very much like to take away.

We don't know what it all means, besides how Lindsey Graham is just goddamned sad as usual.