It's only fitting that today's Sunday show rundown focus on Chris Wallace's final broadcast for Fox News. Lots of people have had lots of things to say about Wallace leaving Fox News. If you'd like to read those thoughts, you know where Google is.

Graham was on "Fox News Sunday" to yell about how the Build Back Better plan is gonna add to the debt. Now, normally, this would come off as regular Republican fearmongering and hypocrisy. Wallace asked Graham about why he had the Congressional Budget Office (CBO) score the Build Back Better plan the way he did, for more than 10 years, and as if every provision would be intact in perpetuity. The obvious answer is that Graham wanted the bill to seem more expensive than it is, and purposely adjusted the parameters to get his desired outcome.

But it was clear Graham was trying to talk to an audience of two, one being former president Donald Trump. The other, if Graham is telling the truth, is the one Democrats should be concerned about: his majesty Joe Manchin of West Virginia.

GRAHAM: [Y]ou know why I wrote a letter to CBO, because Joe Manchin came to me and he said, I think this bill is full of gimmicks, that these programs won't go away, Lindsey, and if you score them for 10 years, I think the bill will double. Well, it didn't double, it was almost 2.5 times.

Wallace pointed out that the same "gimmicks" Graham is bitching about were used by Trump, and that all Senate Republicans voted in 2017 for tax cuts that added two trillion in debt to the economy. After playing a clip of press secretary Jen Psaki saying the same thing, Wallace asked Graham if Psaki had a point in calling out the blatant hypocrisy.


GRAHAM: Oh, no, not really. I like giving money back to the taxpayer. I don't like spending more money than we did in World War II. And that's what we're doing right now.

By "taxpayer," Graham clearly means rich donors and corporations. Because the 2017 tax cuts have all but been proven to disproportionately have gone to the top one percent, while doing very little for the people who actually pay taxes. Oh, and as far as Graham not liking "spending more money than we did in World War II?" As of 2019 America had spent $6.4 trillion on wars in the Middle East and Asia since 2001, far exceeding the $4.1 trillion cost for World War II, which were all voted for and cheered by Lindsey Graham and his late BFF Senator John McCain.

When Wallace pushed back about this, Linds got a bit testy.

WALLACE: But, sir, respectfully, what she has -- what Jen Psaki is saying, and a lot of Democrats are saying is, that when President Trump and you -- you collectively --

GRAHAM: What's that got to do with anything?

WALLACE: That was a lie. It wasn't paid for.

GRAHAM: No, what happens is you can't go beyond 10 years in terms of the budget window. We voted knowing that cutting taxes we believe would be good. I never said that cutting taxes -- I voted for cutting taxes. I'm against expanding the government. They're telling you it doesn't cost anything, Chris. Well, the CBO says it costs $3 trillion. Joe Manchin, if you're watching, you were right, Joe. You got this right. It is a lie. It's $4.9 trillion, not 1.75.

GRAHAM: It's $3 trillion. So Joe Manchin was right.

To clarify, Wonkers, when Republicans want to pass unpaid for tax cuts for the rich YOU CANNOT go beyond CBO's 10-year budget window. But when you want to stop a plan to help the American people, expand that budget window as large as you want, to convince Joe Manchin to obstruct America to a mid-term disaster and beyond.

Lindsey Graham had a lot more bullshit to spread in this interview, but we feel that's enough.

Now enjoy leaving Fox News, Chris Wallace. Lindsey Graham can't hurt you with his stupidity anymore. We sure hope you find a new outlet to ... 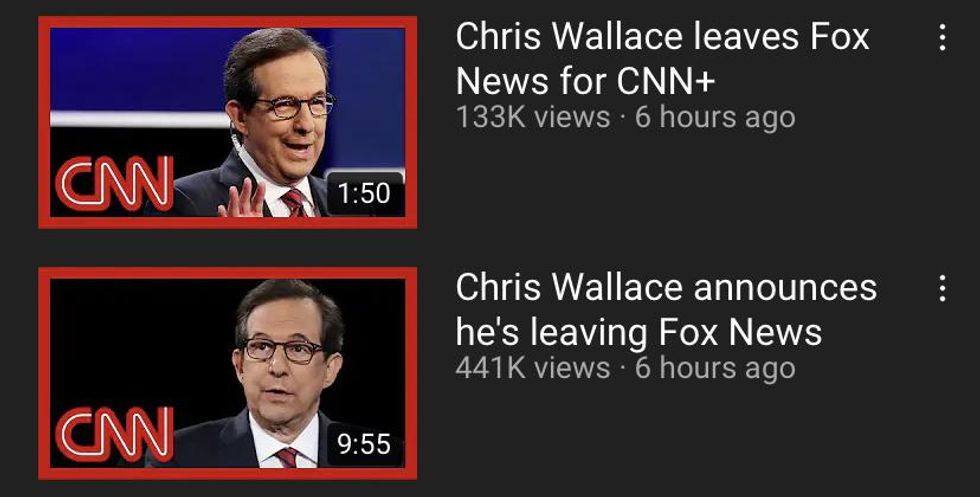 Wait, what the fuck is a "CNN+?" Seriously? We don't need to "Plus," "Max" or "Peacock" everything. Did they learn nothing from Fox Nation? Oh well, whatever.

Wonkette is fully funded by readers like you! If you love Wonkette, FUND US.