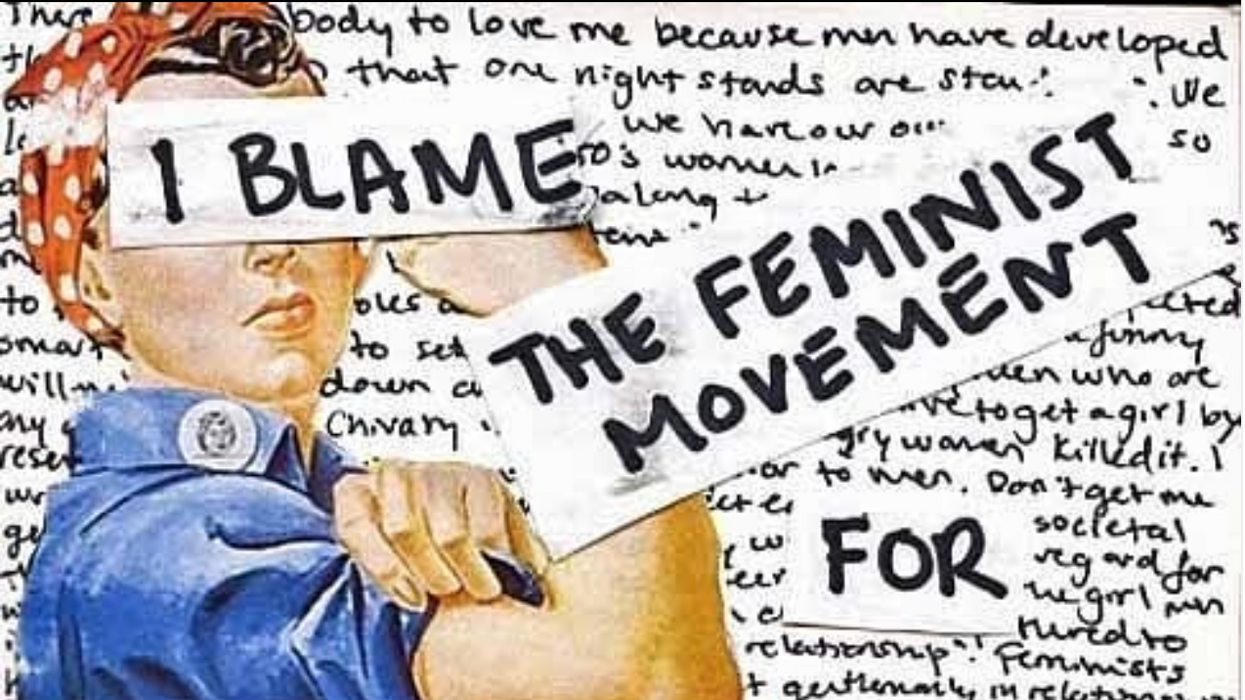 We are now on unlucky Day 13 of Josh Hawley's Masculinity Whine-a-thon, and somehow no one has yet managed to explain to him yet that the reason so many good manufacturing jobs are gone is because Ronald Reagan (and many other Republicans) murdered unions and also generally thought it was a good idea to let business owners do whatever the hell they want. Or maybe they have and he's choosing to ignore that.

Hawley doubled-down Friday morning in an essay in the National Review about how liberals did so murder masculinity. It is not any smarter than anything else he's said over the last two weeks.

But let's read it anyway!

If these pastimes are so popular, so healthy, so pro-social, why wouldn't those on the left embrace them?

They won't because they know the truth: These habits embody the spiritual emptiness that plagues many men in America today. They fill the void left as men have withdrawn from work, family, community, and the task of self-mastery that it was liberalism's project to discredit and displace.

Liberals refuse to own this misery. Instead, they attack anyone who acknowledges it, as they have since I began speaking out on the subject last week. They know their assault on men can only persist if its targets are silent, if conservatives let left-wing lies about men continue unchallenged.

Conservatives tell lies about the Left literally all of the time, and this little jag Josh Hawley has been on lately is one of them. I disagree with Hawley's premise here — that we're telling lies about men that will somehow make them less manly — but let's note that you don't see anyone going "Oh no! Conservatives say horrible and untrue things about us! Guess we'd better let that affect our self-esteem in some capacity!"

I mean, my God — imagine what we'd all be like if we took Rush Limbaugh's thoughts about feminists to heart.

Why is it that it's okay for the Right to insult people, to demand that things be the way they want them to be, but we're supposed to treat them like delicate Fabergé eggs? It's almost as if they are very fragile.

In recent decades, the number of adult men between the ages of 20 and 64 not working — not even looking for work, but entirely out of the labor force — has quintupled, skyrocketing from 3 million in the 1960s to more than 16 million in 2015.

First of all, there are more people right now than there were in the 1960s, so it's more helpful to look at percentages. And it has fallen — from 80 percent in 1970 to 69 percent in 2020. Women's labor force participation rate in 2020 right before COVID hit was 57 percent and now it is 56 percent , a 33 year low. The highest it ever got was 60 percent in 1999, which you may note is less than the 69 percent Josh Hawley is so very worried about.

I suppose Josh Hawley thinks it's fine and normal for women to not have a high labor force participation rate because of how we are supposed to be staying home with babies, barefoot and pregnant in the kitchen — but it seems like it's rough all over for everyone, not just men.

But the damage goes deeper than that. Fewer and fewer men fill college classrooms. Today, men make up only 40 percent of American college students, and that number is expected to drop further. They're putting off marriage, sometimes permanently.

Well let's consider this, Josh. In Saudi Arabia, an extremely male-centric society where women are not even allowed to drive cars, women still outnumber men at university, 51 to 49 percent. It's a slim majority, but still, a majority. In Iran, where things are also not too great for women and certainly not too progressive, women make up 60 percent of college students. In the extremely macho and very not progressive country of Chile, women make up 60 percent of college students. In many of these countries, women still can't expect to get a job after they graduate, and yet they do it anyway.

Clearly, the issue here is not with evil Leftist politics forcing men out, otherwise we would not be seeing the same thing in countries that are clearly not particularly progressive. Perhaps ironically, the difference is less pronounced in Europe — "In 2018, women accounted for 54 % of all tertiary students in the EU-27; however, 52 % of the students following doctoral studies were men."

Whoops. Hey! Maybe if we make all of our public universities subsidized, as is the case in many of these European countries, more men would go to school.

And they're certainly not raising children. By 2020, over 18 million American children lived without a father present. That's more than a quarter of all children in America.

That is an exceptionally loud dogwhistle, Josh Hawley.

The Left acknowledges aspects of this crisis only selectively, in the service of its agenda. Its answer to joblessness is more welfare; to isolation, legalized "sex work"; to male academic floundering, the medication of "hyperactive" and "aggressive" school-aged boys.

To double down on this agenda would only make the problems facing men worse, for it is the Left's agenda that put men in this unhappy place to begin with.

That's not a thing. We want jobs for everyone — jobs that pay a living wage — but yes, if there are not enough living wage jobs for everyone, we still want everyone to survive. Also, legalizing sex work is a human rights and labor issue for sex workers themselves, not a solution to male loneliness. Also, the overmedication of children is a societal issue, not a partisan one.

For decades, the Left worked to replace jobs in the "dirty" trades like skilled manufacturing and, today, the energy sector, with service work from which men have historically shied away.

Except Republicans were the ones who worked to make sure those jobs didn't pay well. Shockingly enough, many of those men were not working those jobs because they just really enjoyed the attendant health hazards, or because they just adored working on a factory floor, but because those jobs paid well and allowed them and their families a nice middle class lifestyle.

But Republicans really, really hated the unions that made it so those jobs paid well — because they were on the side of the "job creators" — so they instituted right-to-work-for-less legislation and other terrible anti-labor laws in their states that made it much less likely that anyone could earn a living off of them.

Today, as the Left always dreamed, the ladder of opportunity — to those lucrative service jobs — runs through college. This means it runs through dependence on government-subsidized debt, the sort of debt that makes it hard to start a family and that can never be discharged.

Only those who graduate with good grades reap the rewards. America has no answer for those who don't, because today its economy, which prioritizes cognitive ability and academic aptitude above all else, fits with what the Left has long wanted.

Yeah, so, just to be clear — there has been a skilled trade labor shortage for years. Those jobs exist and we need people to do them. Some of them are still even unionized, meaning that they can actually earn a decent living off of them.

But many men have more to offer than test scores can measure, and America needs those virtues: courage, strength, risk-taking, and commitment.

I believe those are the very same traits the Sorting Hat looks for when looking to place people in Gryffindor.

But what is it that makes Josh think these traits belong only to men? Especially when they are apparently so weak that the mere act of people discussing concepts like toxic masculinity in public, on the internet, can destroy them? I mean, there are about 35,000 misogynistic sites and message boards out there — members of which sometimes like to go out and murder a bunch of women because they feel rejected — and you don't see us changing our shit or the way we feel about ourselves as a result. That's strength.

These are the virtues that sustain an entrepreneurial and independent republic. But for decades, the Left has been engaged in a social project even more destructive than its economic one. It has pathologized these virtues to suppress the independence they foster. Liberals long ago recognized that independence was a bulwark against tyranny. So they chipped away at it, year after year, by attacking manhood itself.

Absolutely no one is mad at any of those "virtues," no one cares about Josh Hawley doing whatever he thinks independence is, and not one has the least bit of interest in doing tyranny to Josh Hawley or anyone else. If you will notice, we are the ones telling everyone to be themselves, and you are the ones telling people what gender they are allowed to be, who they are allowed to love and demanding that store clerks wish you a Merry Christmas. The only situation in which we do not encourage people to be "who they are" is when "who they are" is an asshole, in which case we politely suggest that they stop being assholes.

The era of COVID — of attempted government command and control of churches, schools, and more — will be a harbinger of the future if we do not recover that spirit of independence. And that means confronting the Left's most destructive campaign — its effort to destroy gender itself — head-on.

Weird for a person who cares so much about independence to want to regulate what people are allowed to think and discuss, re: gender or anything else. I do not see a single person preventing Josh Hawley from being the most stereotypically manly son-of-a-bitch on earth. He is more than free to do that, as is any other man on earth, so long as they don't hurt anyone. Once it moves from lumberjack competitions to nonconsensual sex, we're gonna have an issue.

As is often the case, the schools are the tip of the spear in this war on gender. There, it affects girls, too, in the attack on girls' sports and the elimination of girls' restrooms. So mothers and fathers, now mobilized to fight critical race theory, should turn their attention to the assault on gender. We see this assault on multiple fronts, from the guidance counselors who conflate boyhood enthusiasm and energy with ADHD, to the denigration of athletic excellence, to the radical indoctrination that teaches boys and girls that gender has no meaning and that they cannot be secure in the most basic realities of their own biology.

People used to feel super secure in their belief that a woman's womb wandered about her body when she got "hysterical," so, you know, things change.

Just for the record, we can talk about overmedicating kids all day or over-diagnosing ADHD, but when people who don't have ADHD take ADHD meds, they don't calm down, they start bouncing off the damn walls. Why? Because ADHD meds are speed.

Such lessons, which begin in school but continue in the professional world and are reinforced by left-wing media, teach that all our essences are mutable, and in doing so imply that manhood might be worth muting. That's the message we must tell men to reject, from boyhood to manhood to fatherhood. We must come together as a people to reject the poisonous view that men are contemptible, and that the nation they fought to build is an agent of global evil. Nothing could be further from the truth. American men are and can be an unrivaled force for good in the world — if we can strengthen them, if we can empower them, if we can unleash them to be who they are made to be.