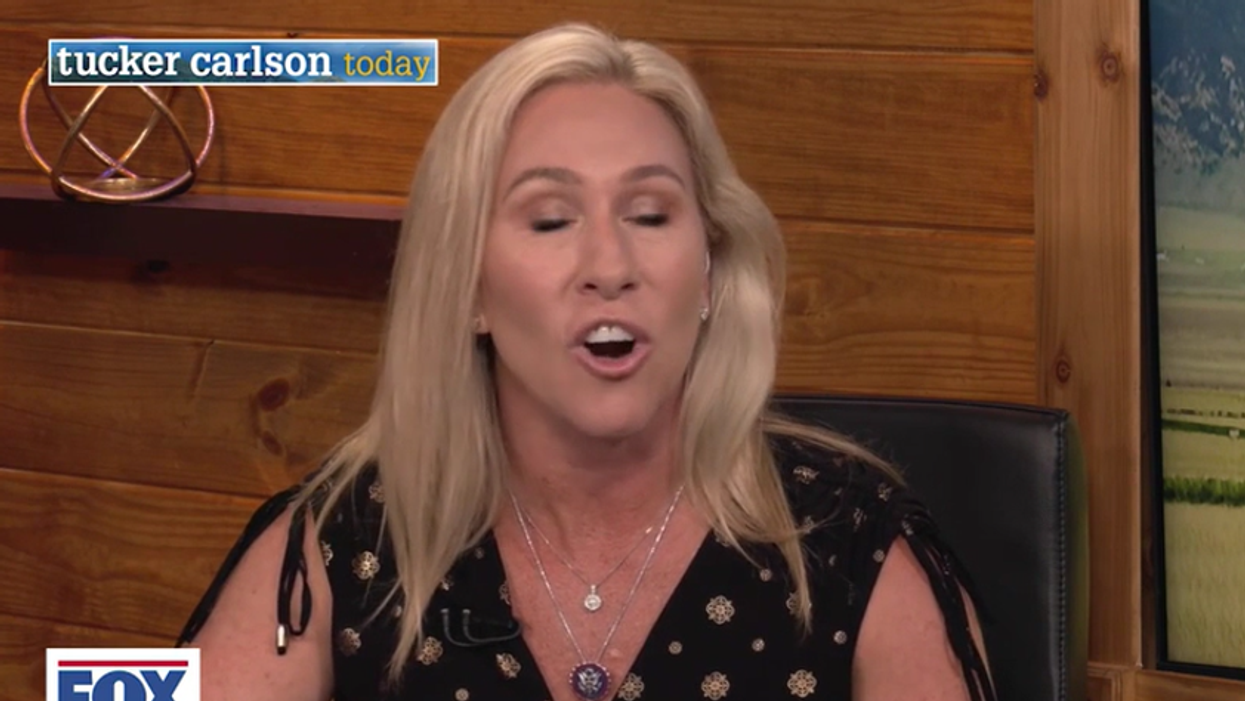 Uh oh, Republican members of Congress are fighting. Which ones? All of 'em.

That's GOP Rep. Nancy Mace of South Carolina, a shitbag in her own right, nonetheless having to respond to GOP Rep. Marjorie Taylor Greene of Georgia, who called Mace "the trash in the GOP Conference" and "pro-abort" and accused her of being friends with the Jihad Squad. Because nobody has ever mistaken Greene for the bookish type, she finished her tweet with "YOUR OUT OF YOUR LEAGUE."

Where did this all come from? Well, Nancy Mace went on CNN yesterday and read a third GOP rep, Lauren Boebert, for filth, for her unhinged bigotry toward Democratic Rep. Ilhan Omar. Mace said she "100 percent" condemned Boebert's behavior. And of course, Boebert is in a four-way tie with Greene, Louie Gohmert and Louisiana dipshit Clay Higgins for "Stupidest Republican In House Of Representatives," so it follows that Greene is doing her part to stick up for Boebert.

Mace also shared these emojis on Twitter this morning in response to Greene's babbling:

We think that means "batshit crazy," but if you want to believe Mace called Greene "Batty, The Poop Clown," who are we to stop you?

As if only the "spellcheck police" were making fun of her for that one. Also, Rep. Greene, we found your missing apostrophe. It's up there in "RINO's," which is actually not a possessive.

To show us how much she didn't care, Greene again addressed the fact that she's too stupid to tell the difference between "your" and "you're," 12 minutes later:

And that time there was a missing comma.

At some point during the fracas, GOP Rep. Adam Kinzinger popped in to call Greene "Circus Barker McSpaceLaser" and throw shade at House Minority Leader Kevin McCarthy for his lack of leadership:

I love this, but worth noting that while this battle between Nancy Mace and the unserious circus barker McSpacelaser, @GOPLeader continues his silent streak that would make a monk blush.https://twitter.com/nancymace/status/1465677124254195716\u00a0\u2026
— Adam Kinzinger (@Adam Kinzinger) 1638281045

So this is all completely normal behavior for one of America's two major political parties.

If you'd like to watch the fight continue to unfold, you'll probably want to stick with Greene's Twitter account. Why? Because she's not allowed to be on committees, so while Rep. Mace goes to work at her job, Greene will likely be doing this all day:

This is not the first time Mace and Greene have fought on Twitter. A few weeks back, when Marjorie Taylor Greene certainly appeared to accidentally have fallen into a torrid romance with the Nation of Islam because of their common love for horse paste, Mace had this to say:

Greene responded, but it was as braindead as today's "you're/your" tweet and not worth reprinting. Mace's response to Greene's response, though, was "Bless. Your. Heart."

Mace may have repugnant views, and it may be hilarious trying to watch her waffle back and forth trying to find her place in today's authoritarian know-nothing Republican Party, but it's clear Greene is painfully mentally outmatched here.

Anyway, we can all mewl that Boebert and Greene don't matter and we shouldn't give them any airwaves or brainspace, but they're probably going to win back the House next year, haha, this is our country, the end.