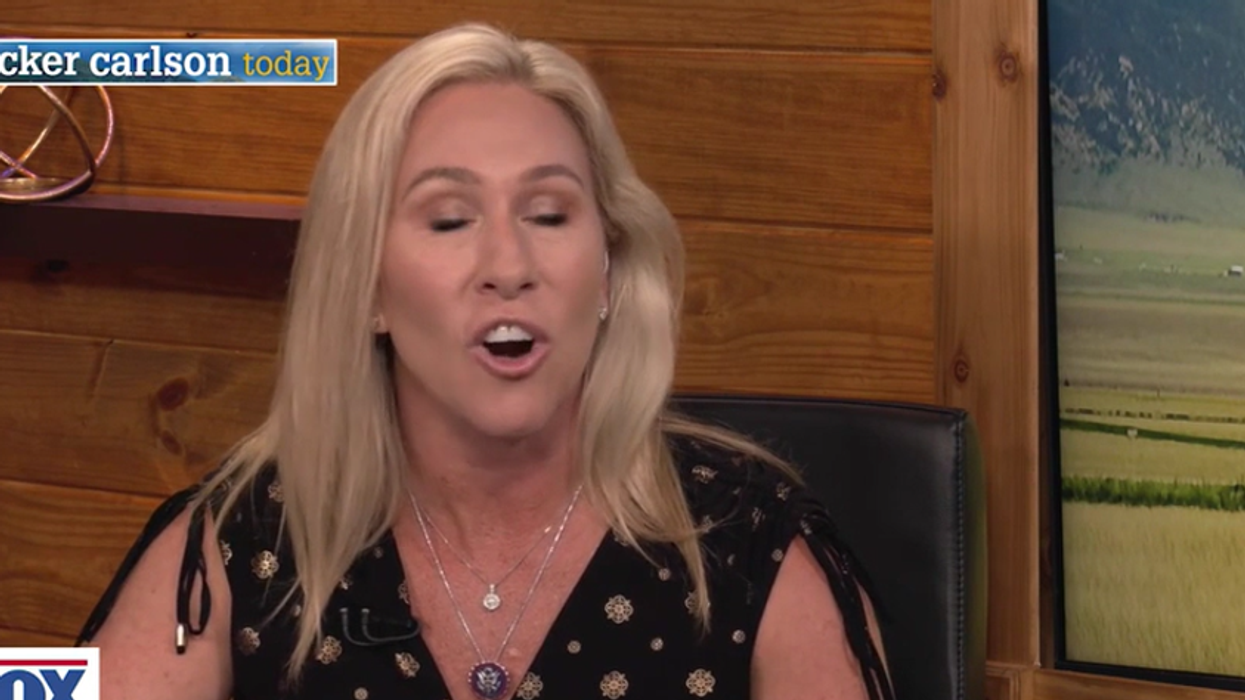 Know that thing where Marjorie Taylor Greene goes to the DC jail where they're holding Donald Trump's accused January 6 terrorists and she immediately falls down a rabbit hole whereupon she finds herself in a large room with a tiny door she can't fit through but then something says "drink me" and she's like "OK" and then she becomes very tiny but immediately finds out the door is locked and the key is waaaaaay up there on the table and she can't reach but then something is like "eat me" and she's like "OK" and before she knows it she is ENORMOUS beyond belief and she cries and cries about that because why did she follow that rabbit anyway (it was white) but anyway then she drinks some more of Potion #1 and that allows her to ride a river of her own tears through the keyhole in the tiny door and before she knows it she's accidentally become a member in good standing with the Nation of Islam?

Some fucker put editrix Rebecca on Greene's mailing list, which is why we can tell you that Greene is still real mad at the DC jail, and she and a bunch of her mouthbreather colleagues are sending snippy letters to DC Mayor Muriel Bowser HEREBY ORDERING the removal of the deputy warden, whose name is Kathleen Landerkin. In their letter they make many accusations! Of course, the Twitter account Greene cites as evidence of Landerkin's alleged behavior doesn't appear to exist, so who the fuck knows if it was real or if it was indeed Landerkin's former Twitter account, and if so, if it was deleted because of mouthbreathing harassment from the likes of Marjorie Taylor Greene. We also can't see the actual source material to figure out how badly poor Marjorie Taylor Greene misunderstood whatever she may have allegedly read there.

Regardless, the accused garbage seditionists in that DC jail are near and dear to Greene's heart, so here are some things Greene testifies to in the letter, along with morons like Scott Perry, Lauren Boebert, Andy Biggs, Matt Gaetz, Louie Gohmert, and a couple others. You know, the Inner Sedition Caucus:

In one paragraph, Greene sounds out some words about how when she visited the jail — guessing we're talking about the visit where she couldn't stop reading the Nation of Islam newspaper — she found out these white supremacists were subject to "verbal abuse," which Greene explains amounts to being called "white supremacists." She says they are beaten and denied their rights to "communion" and "nutritious diet." And so on, and so forth. We'd type more about the conditions of the members of Trump's insurgent group who have been rounded up so far, but you're already weeping.

She's still pretty mad about that Nation of Islam literature she found:

Landerkin is perpetuating a two-tier incarceration system where Caucasian pre-trial detainees are given “Nation of Islam” reading materials telling them they are evil because of the color of their skin and that America is a terrible country that perpetuates a racial caste system.

Noted! Greene thinks "Caucasian" people should get reading materials that are different from the ones other people get.

Of course she fails to prove that the jailers are specifically forcing her white supremacist inmate speed dating group pals (allegedly!) to read Louis Farrakhan. Perhaps its mere presence in the jail is triggering for these snowflakes.

Meanwhile, other inmates—many of whom have already been convicted—have access to book clubs, moot court, and hours of television

About Landerkin herself, here is a paragraph about her alleged bad actions.

If her actions toward the January 6 inmates were not enough, her words speak volumes. Landerkin has endorsed numerous statements which are blatantly anti-American and reprehensible: among others, equating Christians to the Ku Klux Klan (KKK),

Cite source. Oh wait, it's that deleted Twitter account. Yeah, we bet Landerkin said EXACTLY that. Or something entirely different that, again, Greene is too idiot to understand.

stating that Ashli Babbitt was responsible for being shot on January 6,

Show us the lie.

labeling the President a “f**king Republican hypocritical piece of shit” and “a pig,”

and advocating that Speaker Pelosi punish Republican Members of Congress for objecting to the certification of electoral ballots by not seating them as duly-elected Representatives.

Anything else from the congressman from CrossFit?

Haha, of course there is but to find out you'd have to read the letter for yourself, because fuck that, we're done.