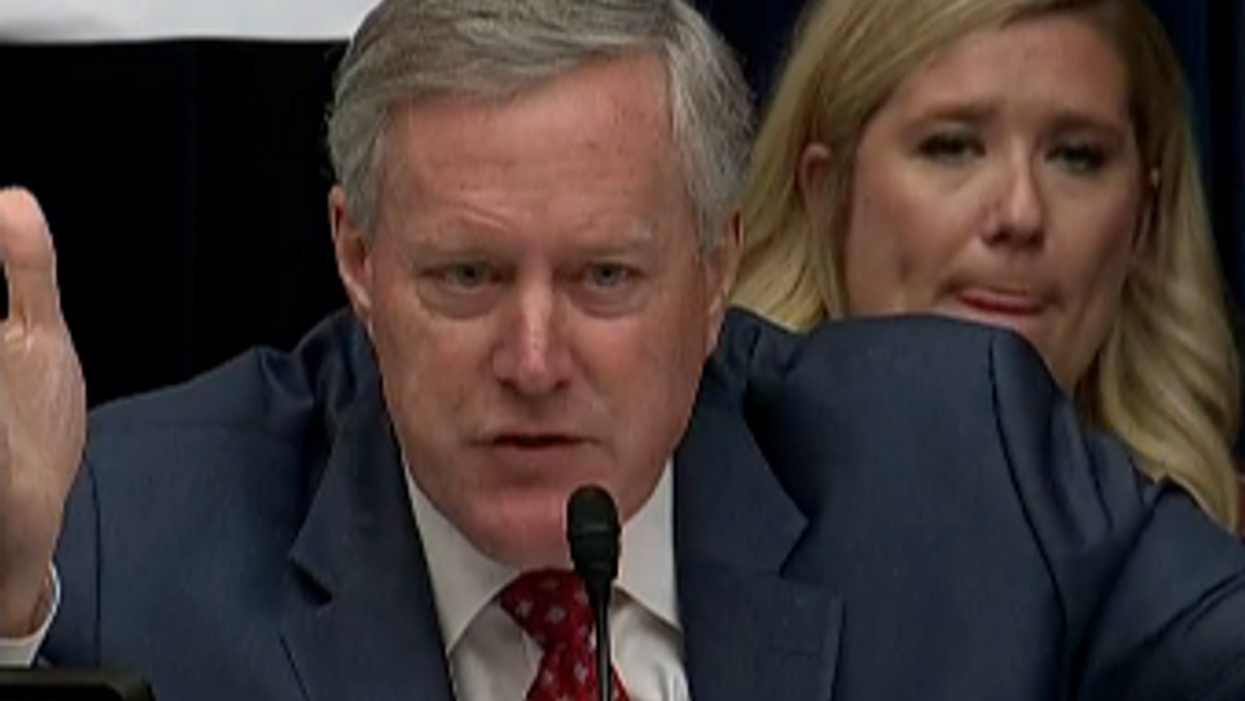 Former Trump chief of staff Mark Meadows has decided that actually he will be cooperating with the investigation by the House January 6 Select Committee. The erstwhile South Carolina congressman had insisted that he could not possibly comply with the Committee's subpoena for testimony and records because Donald Trump told him not to. Perhaps the former president might wish to assert executive privilege in the future, even over communications Meadows had entirely outside the executive branch with organizers of the January 6 rally-turned-riot, he reasoned.

Meadows even went so far as to send his fancy lawyer George Terwilliger III, the former deputy attorney general, to publish an opinion piece in the Post accusing President Joe Biden and congressional Democrats of blowing up 200 years of history and destroying executive privilege.

But apparently Meadows has had a change of heart. Perhaps it was due to a frank discussion with his family over giblet gravy somewhere outside the DC bubble. Maybe he realized that those rally organizers he'd been chatting with were all cooperating, and they were going to narc him out anyway. Or it could have been the sight of Steve Bannon ranting on the courthouse steps as he turned himself in.

For whatever reason, Meadows has decided that he doesn't want to go to jail after all. And, as CNN was first to report, he and the committee have reached some kind of accommodation whereby the investigators will not be making good on their threat to hold him in contempt of Congress and refer him to the Justice Department for possible prosecution. At least not yet.

Vice Chair Liz Cheney told Politico that Meadows would be testifying next week and confirmed that the Sword of Damocles remains very much over her former colleague's head. "We anticipate that this will be an initial deposition, and we'll make a determination as we go about the extent of his compliance. He’s under a legal obligation, and we anticipate that he will fulfill that legal obligation," she said.

For his part, Terwilliger insists that his client hasn't tapped out on executive privilege

"As we have from the beginning, we continue to work with the Select Committee and its staff to see if we can reach an accommodation that does not require Mr. Meadows to waive executive privilege or to forfeit the long-standing position that senior White House aides cannot be compelled to testify before Congress," he told CNN. "We appreciate the Select Committee's openness to receiving voluntary responses on non-privileged topics."

Meanwhile, former Justice Department attorney Jeffrey Clark is taking the Bannon route. Clark's Keystone Coup failed when the entire DOJ leadership and White House senior legal team threatened to resign if he was put in charge of the DOJ and allowed to use it to open fake investigations of non-existent voter fraud as a pretext for state legislatures to "de-certify" their Electoral College votes. His efforts were reported widely in the media and documented in a September report by the Senate Judiciary Committee.

In lieu of Clark testifying as subpoenaed, his counsel handed this wackass letter to the House Select Committee and walked out. His theory was that, although Trump had explicitly waived privilege for Clark's testimony, this waiver was conditioned on the Committee not subpoenaing anyone else. And since other witnesses were called, the permission was clearly revoked. Which is not how any of this shit works, since executive privilege exists to protect the institution of the presidency and the interests of the American people, not some golfing maniac's bloated haunches.

So today it is AND FIND OUT time for Clark, with the Select Committee meeting to refer him to the full Congress for a contempt vote. Womp womp.

"Mr. Clark’s refusal to comply with the Select Committee’s subpoena represents willful default under the law and warrants referral to the United States Attorney for the District of Columbia for prosecution under the contempt of Congress statute as prescribed by law," according to the committee's proposed referral. "The denial of the information sought by the subpoena impairs Congress’s central powers under the United States Constitution."

We can do this the easy way, or we can do this the hard way. As for all those witnesses who aren't getting the sharp end of the stick from the committee, well, you can safely assume that they chose to talk tough in public and sing for their supper in private.