Some days the universe gives us ONE PERFECT THING. And friends, that day is today — if your definition of perfection is a PowerPoint presentation that is clearly the bastard child of Sidney Powell and a Pepe Silvia meme.

My Lord, but just look at this thing: 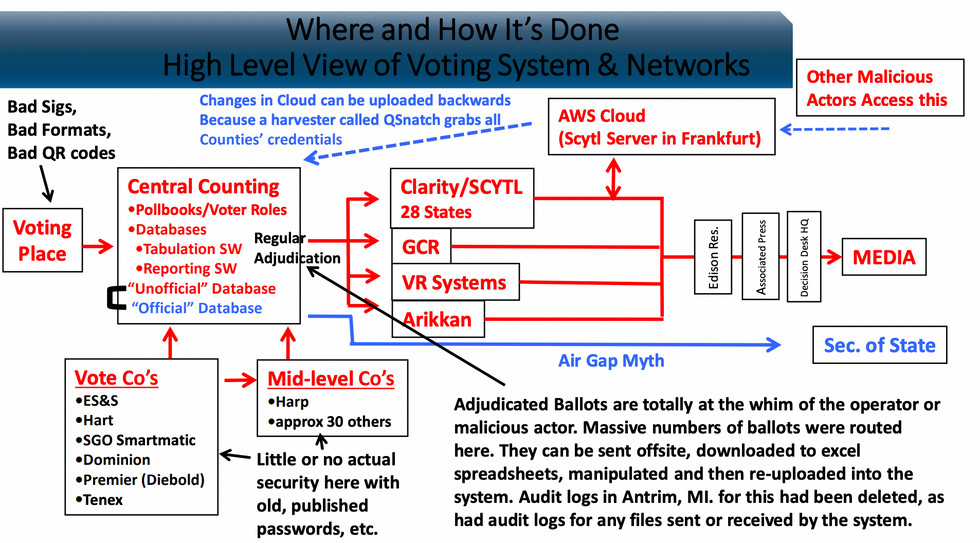 Remember yesterday when former Trump chief of staff Mark Meadows said he wasn't going to appear before the House January 6 Select Committee because he was too busy whispering "executive privilege" into the crack of Trump's ass or something? He actually filed a lawsuit against House Speaker Nancy Pelosi and the Select Committee members last night for tortious subpoenaing, or some such. But before that, he turned over a crapload of documents to the committee, thereby establishing that he has plenty that he could tell them that falls outside of executive privilege.

Among the documents turned over was this particular funhouse slideshow, which the sender intended for distribution "on the hill." It's a compendium of every single election conspiracy dreamed up by Kraken or crackhead, and calls for a nationwide recount at the end of a National Guard rifle. According to national security expert Karen Piper, who first flagged the report on Twitter, it was cooked up by Phil Waldron, a retired U.S. Army colonel who flogged Rudy's false election claims, and Allied Security Operations Group, which produced similar bogus analyses in Michigan.

It begins with a set of "Talking Points" that suggest Trump get the ball rolling by declaring a "national security emergency" and "declare electronic voting in all states invalid":

To restore confidence the “failsafe” of counting the paper ballots must be used to determine who won the election for President, Senators, Congressional Representatives

Then it moves on to the "Vote Injections" in swing states as the absentee ballots were counted.

After which Georgia got an EKG. 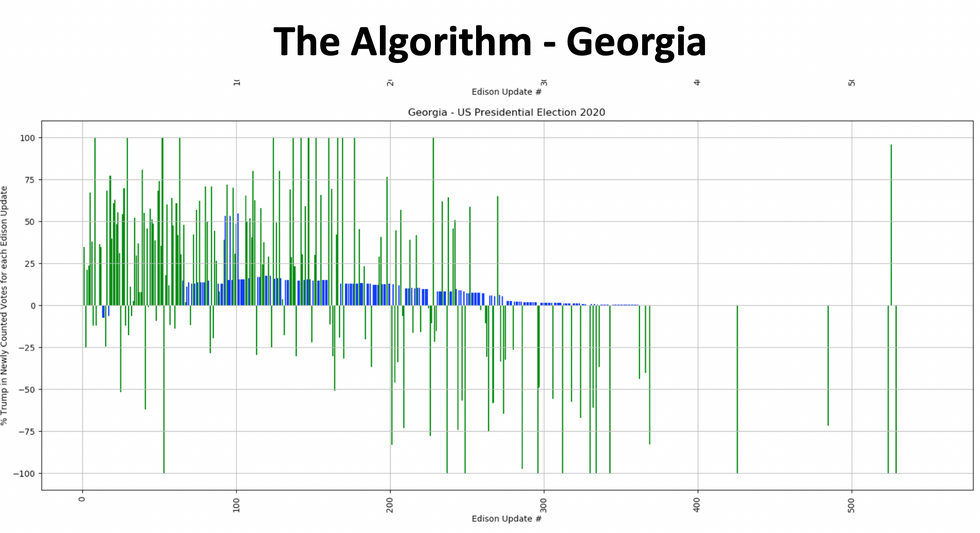 And apparently Xi Jinping was the doctor?

China has leveraged financial, non-governmental and foreign allies including Venezuela to acquire INFLUENCE and CONTROL US Voting Infrastructure in at least 28 States.

Critical Infrastructure control utilized as part of ongoing globalist/socialist operation to s ubvert the will of United States Voters and install a China ally.

It all makes complete sense if you just take a look at this chart. 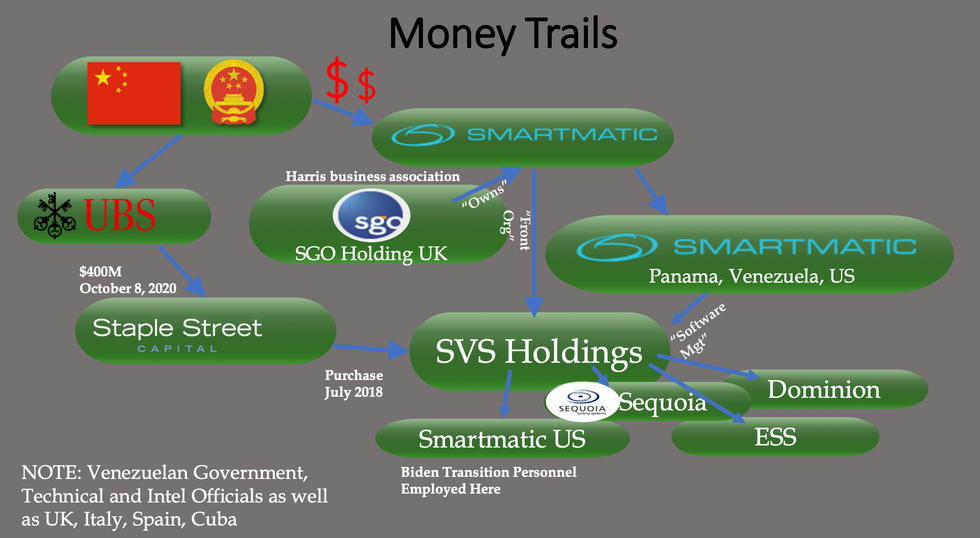 Oh, good, the Italians are here. The party can get started now.

Anyway, Smartmatic buys some technology from a Chinese company, which means that Smartmatic is the Chinese Communist Party. And since Smartmatic and Dominion once sued each other in Delaware over a patent dispute, that means all their tech is the same. And guess which Chinese Manchurian candidate hails from Delaware? Isn't it obvious that "CCP Control of Testing for Smartmatic Software Operation on Dominion Voting Machines, ergo, they embedded anything they wanted!"

THINK ABOUT IT, SHEEPLE ... as you bleed from your eyeballs from this insane font-shifting slide. 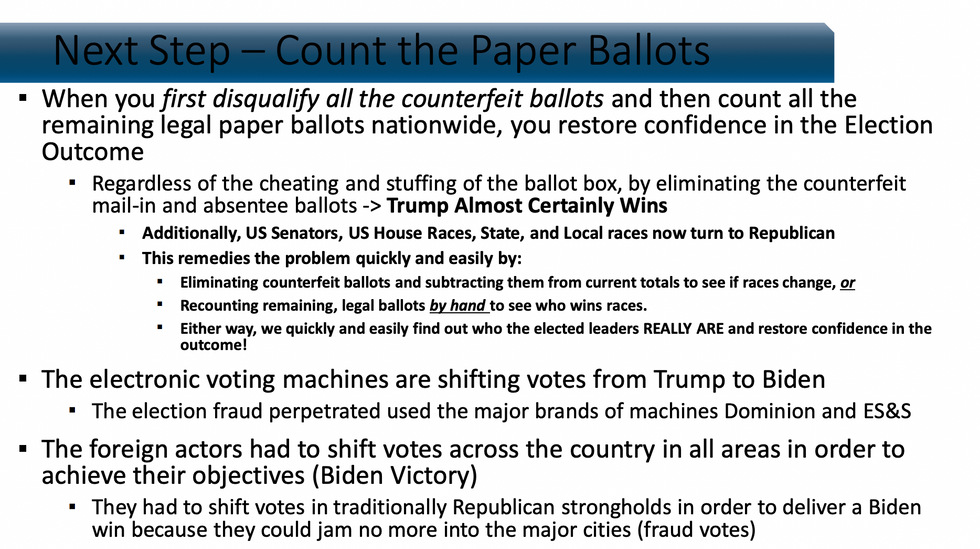 Republican victories will be assured if the President unilaterally declares that all machine cast votes are UNLEGAL and demands that only paper ballots be counted. Never mind that the Constitution explicitly leaves the means of conducting elections up to the states — this is A 'MERGENCY!

There's nothing for it but to appoint a Recount Czar! The author recommends Sid Gutierrez, a 70-year-old retired astronaut from New Mexico because who else would you want to be your "Trusted Lead Counter [who] will be appointed with authority from the POTUS to direct the actions of select federalized National Guard units and support from DOJ, DHS and other US government agencies as needed to complete a recount of the legal paper ballots for the federal elections in all 50 states."

Then US Marshals can go LOCK HER UP all the ballots, and three to five federalized National Guardsmen can go count them in each county. Shouldn't take more than 5-10 days, easy peasy. Just like that Arizona audit.

The federalized National Guard in each state will be supplied detailed processes and be responsible for counting each legitimate paper ballot. Teams made up of three (first couple counties will be five) National Guard members will do the counting. As the counting occurs each ballot will be imaged and the images placed on the Internet so any US citizen can view them and count the ballots themselves. The process will be completely transparent.

All they have to do is toss out the counterfeit ballots, plus those that are unconstitutional, and Trump is back in the Oval Office forever. Of course, SCOTUS will have a part to play.

The legality of each ballot will be determined based on the Constitution and therefore the laws enacted by the state legislatures and in effect at time of the election. Exceptions will require an affirmative vote by the SCOTUS stating that Article II, Section 1, Clause 2 has been suspended. Otherwise all officials will follow the Constitution.

Or Mike Pence could to Trump a solid and toss out the swing state electoral votes, the author is good with that one, too.

Here's the best slide of all. 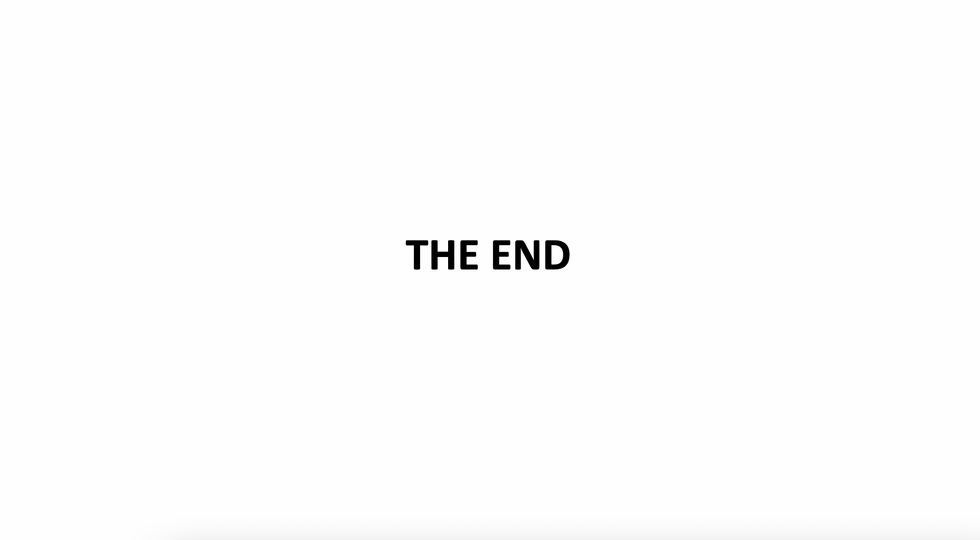 In the interests of fairness, we should note that there's no evidence as yet that Meadows took any steps to implement this scheme — although he did pressure the DOJ to look into the Italian Space Laser theory of election fraud, so it's not beyond the realm of possibility. And his absolute shitfit when he found out the Select Committee had subpoenaed his comms is a wee bit suspicious.

Let's just say that there was some weird, insane shit going down at the White House after the election, and the committee needs to get to the bottom of it.