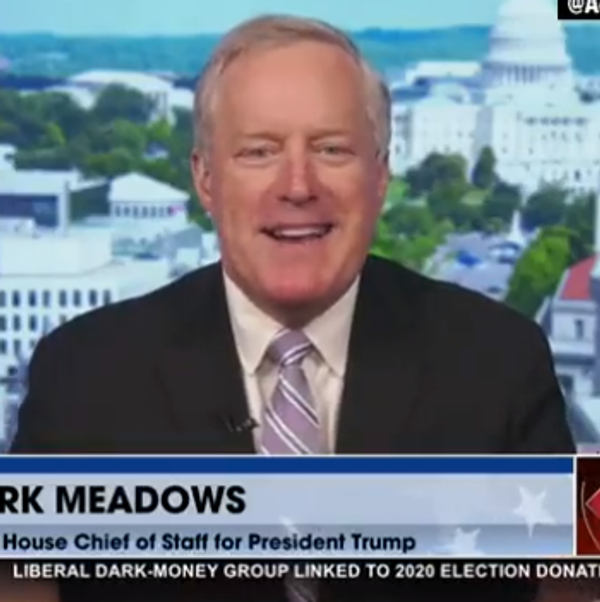 Mark Meadows, the guy who quit a perfectly good seat in Congress so he could go suck Donald Trump's teat as his chief of staff, told Steve Bannon this week about a fever dream he's been having lately.

Speaking with recently-indicted Steve Bannon on his podcast, The War Room, Meadows said, "I would love to see the gavel go from Nancy Pelosi to Donald Trump, talk about melting down, people would go crazy." [...]

"She [Nancy Pelosi] would go from tearing up a speech to giving the gavel to Donald Trump, oh she would go crazy," Meadows continued, referencing Pelosi's ripping up a printed copy of Trump's State of the Union address in 2020.

The wingnut fap fantasy here is that Trump would become speaker, he would impeach Joe Biden, and then somehow the Senate would magically bend to his will and Trump would be restored to his rightful place in power.

Of course, there are some problems with this, none of which are that the speaker has to be a member of the House of Representatives, because they don't. We're thinking more of problems like how Trump is the laziest fucking person on the planet, who probably can't even spell "impeachment," much less draft articles of impeachment.

And again, there's that whole thing with the Senate. Democrats couldn't find a few honest Republicans to agree that Trump shouldn't try to force countries to help him steal elections, or that he shouldn't incite terrorist attacks on entire branches of American government. Likewise, good luck even getting a majority of senators, much less two-thirds, to agree that Biden should be impeached for "DURRRRRR AFGHANISTAN? HUNTER BIDEN LAPTOP? DURRRRRRR?"

Hell, he might not even get a majority of the House, even if Republicans take it back next year. Also, raise your hand if you think Donald Trump can count votes.

Steve Bannon, who is currently under federal indictment for telling Congress's subpoenas to go fuck themselves, would likely be overjoyed by such a prospect, for the leadership of the House of Representatives to go from Nancy Pelosi, who created the select committee that's investigating the January 6 attack — the committee that referred Bannon for indictment — to Trump, who instigated the attack. He'd love it on a number of levels, we think.

Of course, that would be like if Republicans had made Osama bin Laden speaker in 2002.

But we have an honest question here, something we're really getting curious about, and it's this: When are these power-hungry Republican bastards going to start giving a shit about THEIR OWN power again? We mean personally, not collectively. Is it in 2024? Next year when the midterms get going in earnest?

Because to us, it seems like Mark Meadows is slapping his erstwhile pal Kevin McCarthy and any other mouth-breathing Republicans who might be hungry for the speakership (Jim Jordan) right across the face by suggesting that garbage outsider Trump should come in and usurp leadership in the House. Forget owning the libs, they're owning their own people.

Meanwhile, we're seeing all this waffling from the likes of Ron DeSantis and Josh Hawley, men we are pretty sure would much rather be the Republican nominee in 2024 than they'd like to be forced to worship Trump as the once and future king, to infinity and beyond, while they grunt around on the floor desperate for Trump to throw them his table scraps.

It's astounding how they've all turned into such slobbering sycophants ever since Trump waddled down that elevator 2015 and presented himself as the world's ugliest man. Astounding and pathetic.

Are they all so stupid as to think that Trump will one day step aside and anoint them? If so, what part of the last six years suggested to them that loyalty goes both ways with Trump?