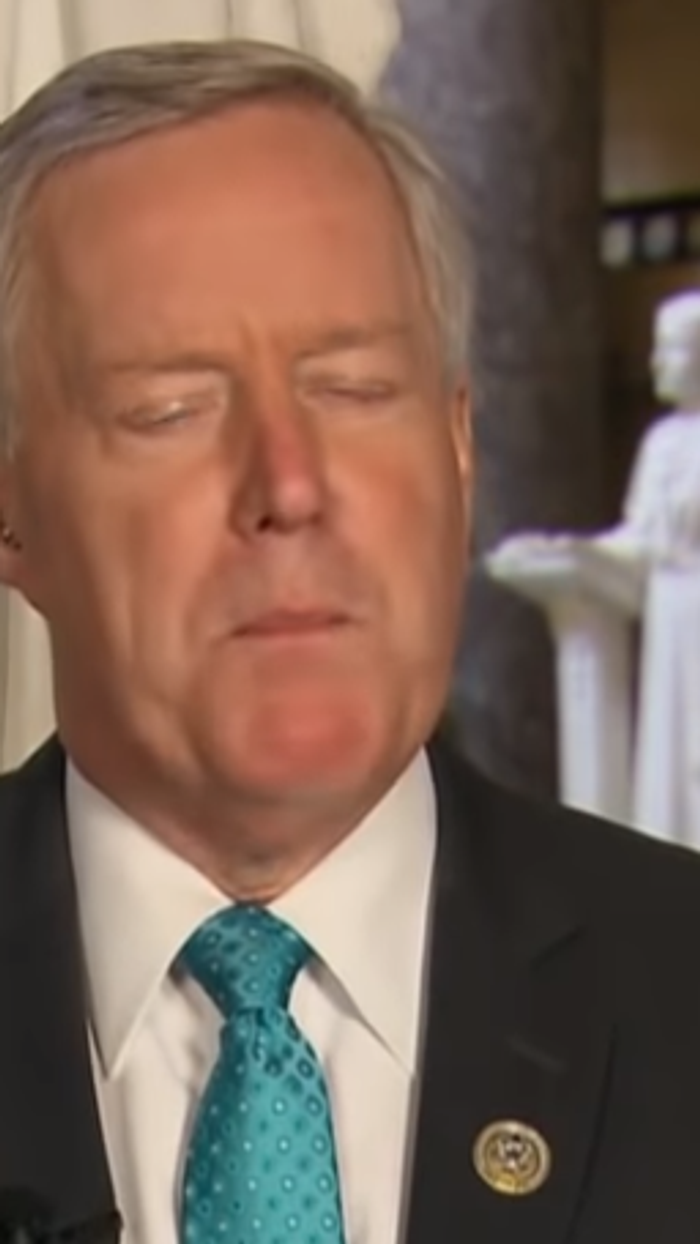 Mark Meadows is wilding out again. The former White House chief of staff appears to have bumbled into a contempt of Congress referral, handing over just enough documents to allow the January 6 Select Committee to beat him over the head, while ensuring they can still make a strong case to the Justice Department that he willfully failed to cooperate.

Last week he actually sued Nancy Pelosi and the Committee members, hoping the US District Court in DC would declare the subpoenas UNLEGAL. And now, after the Committee released a 51-page report on all the stupid, anti-democratic shit Meadows got up to, his lawyer is begging the Committee members not to follow through with tonight's planned vote on a contempt referral to Congress as a whole. Do not "rush to judgment," urges attorney George Terwilliger III, complaining that a referral would be "contrary to law, manifestly unjust, unwise, and unfair."

We're just real broke up that the guy who "sent an email to an individual about the events on January 6 and said that the National Guard would be present to ‘protect pro Trump people,' and that many more would be available on standby" painted himself into a corner and can't figure out how to get himself out. What is the world coming to when a government employee can't help coordinate an attack on Congress to overturn the results of an election in concert with a political campaign, and then hide his sins under Lady Liberty's skirts? You know, allegedly?

The report, published this weekend by Committee Chair Bennie Thompson in support of the scheduled contempt vote, is pretty damning. It notes that Meadows has refused to answer any questions from the Committee, even on topics about which he himself has declined to assert executive privilege.

Thompson also calls bullshit on Meadows's claim of privilege re: conversations he participated in with Donald Trump and various campaign officials and Kraken Kranks, who are in no universe members of the executive branch. He further points out that Meadows has likely already waived privilege by writing about the events in question in his own book, not to mention discussing them on television. And not for nothing, but since Meadows filed his LOLsuit against Pelosi et al., in which he referenced the DC Circuit's hold on the National Archives releasing Trump's presidential records to the Committee, the appellate panel issued an opinion affirming that an ex-president's assertion of privilege doesn't outweigh a sitting president's waiver of it.

And while we're on the subject, the Committee notes that Meadows is now claiming privilege over messages on his personal cell phone, multiple Gmail accounts, and the encrypted messaging app Signal. If those communications are privileged, as Meadows insists, that begs the question as to why he failed to use his official White House account for executive branch business. Or why those official communications haven't been turned over to the National Archives as required by the Presidential Records Act. Or why Mark Meadows doesn't have to go directly to email jail for conducting "government" business on a private server.

In summary and in conclusion, Mark Meadows handed over evidence to the Select Committee that not only admits that some of his communications are not privileged, but also contains prima facie evidence that he failed to comply with federal records retention laws. Compare this to Kash Patel, the Forrest Gump of every Russia and Ukraine scandal for four years, who appears to be cooperating with the Committee, and Steve Bannon, who totally stiff-armed the subpoena and got indicted for contempt of Congress, but at least had the sense not to hand over incriminating documents.

So in case you were wondering who's the stupidest person subpoenaed so far, looks like we have a winner.