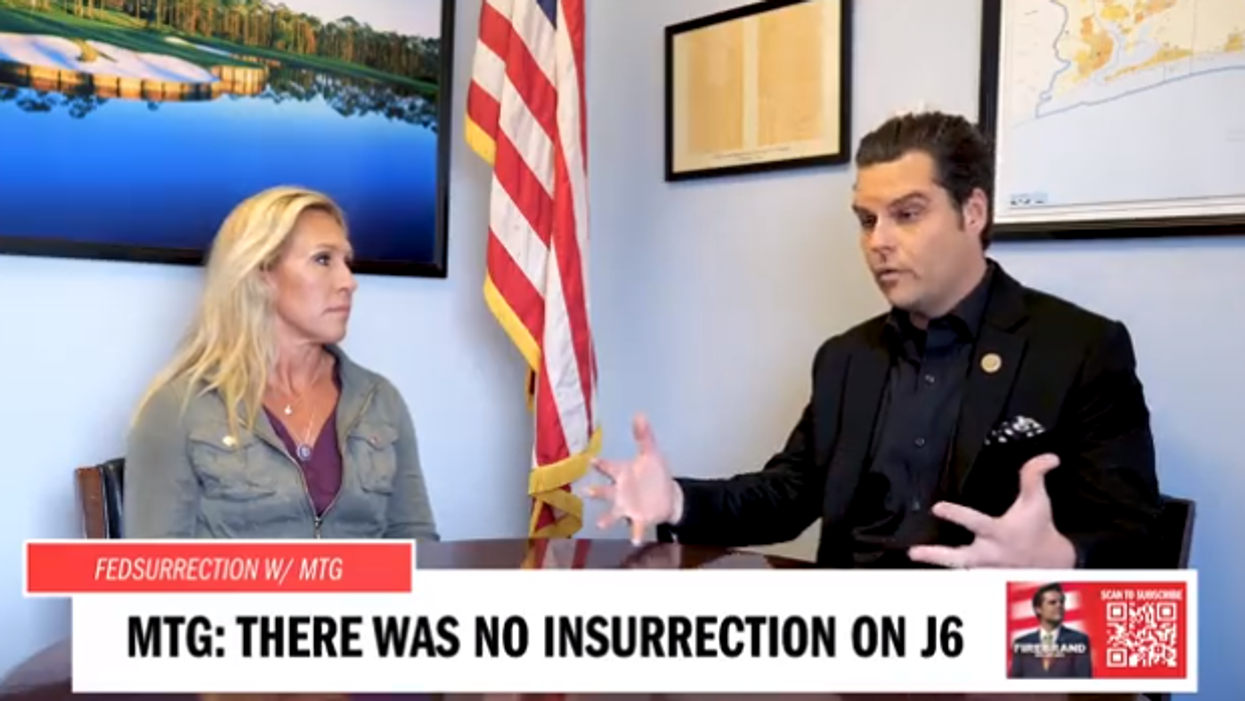 WTF is wrong with these people? No seriously. We're asking in more than all the obvious ways.

We showed you some of how Matt Gaetz and Marjorie Taylor Greene spent their 1/6 insurrectionist Christmas, a piece of their fucknuts press conference where they babbled their conspiracy theories, but we didn't show you all of it.

Please watch this video of Gaetz and Greene on his podcast, trying to intellectually work through the question of whether they should disband the House January 6 Select Committee when they take power, or whether they should take control of the committee so they can find the REAL truth about the FEDsurrection. (That's the braindead conspiracy theory they "believe in," which they also talked about at their press conference, where the FBI set up Gaetz, Greene, Donald Trump and their followers to look like the world's stupidest white supremacist seditionists, as opposed to them, just, you know, being that. It's a Tucker conspiracy theory. It's assbonkers.)

Rep. Marjorie Taylor Greene Ready to Expose the Truth About J6 on @Firebrand_Pod\n\n"I'm ready to rip the whole thing wide open and expose everything\u2026How is the FBI, the Department of Justice, or any of our agencies involved in what happened on January 6?"\n\nhttps://rumble.com/vs1s8l-episode-21-fedsurrection-feat.-marjorie-taylor-greene-darren-beattie-firebr.html\u00a0\u2026pic.twitter.com/o8yfkSqwag
— Rep. Matt Gaetz (@Rep. Matt Gaetz) 1641485880

What does it sound like in their brains? We are just curious.

On Steve Bannon's podcast yesterday, Gaetz said he wants Greene to be the new chairperson of the January 6 committee, which is quite a promotion for a member of Congress who isn't currently allowed to pick up dogshit in the backyard of a real congressional committee, much less serve on one.

“Why is there no accountability for the very people who are on video dispassionately and professionally setting up a booby trap for people, a lot of whom didn’t even know they were breaking the law because barriers had been removed,” Gaetz said on Bannon’s podcast.

Booby-trapped! Tricked into invading the Capitol using American flags as spears and setting up gallows to hang the vice president! They didn't even know they weren't supposed to be doing that! Were the sides of that building whispering "Climb meeeeeeeee?"

And here he is attempting to convince everyone he and Greene and all their seditionist pals are being "blood libeled," no really he said "blood libeled":

“The people all in this country know what is driving this, and that is the folks inside the beltway of Washington, D.C. — severely impacted with the pandemic of Potomac fever — believe that the way that American democracy ought to work is that they ought to get to make all the decisions,” Gaetz said.

We're not even playing with his stupid words about "voters picking the leaders," because we all know for today's Republicans, "voters" is code for "white supremacist fascists who think like us." We're also not spending paragraphs feigning surprise at how casually anti-Semitic it is for Gaetz to throw the phrase "blood libel" around like that. He was sitting next to the Jewish space lasers woman. Of course he did that.

And then of course there was the rest of their press conference.

Here's the part where Greene and Gaetz tried to talk down to Ted Cruz, and Gaetz told him the "establishment" will never love him, no matter how much he "bends over" for them. This is because they are all BIG MAD Ted Cruz called the January 6 terrorist attack on the Capitol a "violent terrorist attack on the Capitol." (Ted Cruz BEGGGGGGED for forgiveness from Tucker Carlson for saying those words, by the way. And Tucker is still BIG MAD.)

There's a lot we could say about that video, but we can't get past the idea that these two imbeciles think they are qualified to talk down to Ted Cruz. Seriously. Don't even venture into the other details, and just have fun with the fact that those two particular people think they can talk down to Ted Cruz, who, despite how universally loathed he is, is a real lawyer and a real senator with a real Ivy League education.

If they want Ted Cruz to do what they say, try insulting his wife. Start there, amateurs.

Greene: I don\u2019t want to have anything to do with a government that is so obsessed overturning regime change in our own countrypic.twitter.com/8jFHE53Xtc
— Acyn (@Acyn) 1641498228

GREENE: Now I don't want to have anything to do with a government that is going to be so obsessed with overturning regime change in our own country ...

OK. Those are words.

These people are in the United States Congress. And really, they're the congressional leaders of the Republican Party.