This ad is from the company that made the gun the Texas killer used. I don’t even fully understand the message TBH. But to my knowledge deeply twisted gun fetishization like this does not exist in any other wealthy country (probably not in many developing nations either): pic.twitter.com/vE83nIskKs

I'm pleased that he recognizes the uniquely American nature of this sick fetishization. But how can he not "fully understand the message"?

This ad shows a little kid fondling an assault weapon under a Bible verse (Proverbs 22:6) because -- as is obvious to anyone who's paid a reasonable amount of attention to U.S. conservatism in recent years -- right-wing Americans don't just believe they have an unlimited right to bear arms, they believe that this right was given to Americans by God.

In February, Governor Greg Abbott of Texas asserted that the Democrat who'll be running against him, Beto O'Rourke, "has threatened your God given Second Amendment rights by threatening to come and take your guns." Many other Republicans have used the same phrase. Katie Britt, who'll probably be the next U.S. senator from Alabama, refers to "God-given Second Amendment rights" on her campaign website; she adds:

The Republican Senate nominee in North Carolina, a House member and gun store owner, also refers to "our God-given Second Amendment rights" on his congressional website. Rich Lowry, the editor of National Review, wrote an opinion piece for Politico in 2019 titled "Yes, Gun Ownership Is a God-Given Right." A year earlier, Wayne LaPierre of the National Rifle Association made the same claim in a CPAC speech:

There is no greater personal individual freedom than the right to keep and bear arms, the right to protect yourself, and the right to survive. It's not bestowed by man, but granted by God to all Americans as our American birthright.

Do these prominent people believe this? Hard to say. But their intended audience does.

William ought to know that. And Tim Carney of the Washington Examiner (also an American Enterprise Institute fellow) ought to know why this is ridiculous:

As I think I just made clear, right-wing Americans think the right to own guns literally comes from God, so religion in America is certainly not going to wean them off weaponry. Also, there's this: 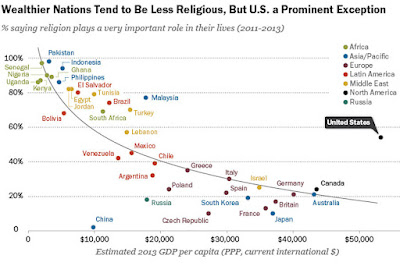 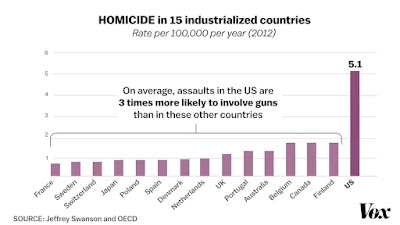 All over the world, the citizens of rich nations have largely abandoned religion -- with the exception of Americans. And where are all the gun crimes? They're here, not in those non-religious countries.

Why can't we have a better commentariat?