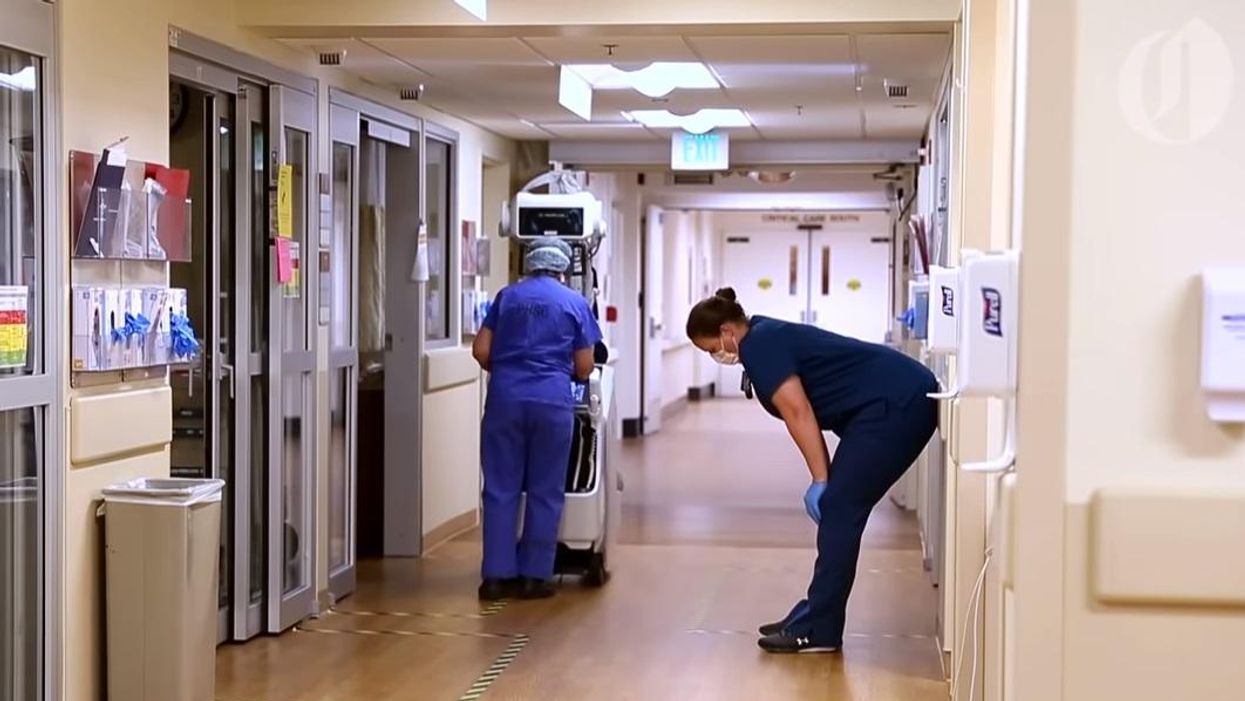 As we head into another Thanksgiving and War on Christmas season with COVID, take a little time to read The Atlantic's piece on why the next phase of our healthcare crisis may be made a lot worse by the departure of tens of thousands of medical workers from their professions. We're not talking about the few Fox-watching nurses and staff who have refused to get vaccinated and then become Twitter heroes for three minutes, but instead the folks who have simply nothing more to give after a year and a half of near-constant stress. It isn't just a sobering story, it's downright scary, because here have some numbers:

The U.S. Bureau of Labor Statistics estimates that the health-care sector has lost nearly half a million workers since February 2020. Morning Consult, a survey research company, says that 18 percent of health-care workers have quit since the pandemic began, while 12 percent have been laid off. [...]

Morning Consult, in the same survey, found that 31 percent of the remaining health-care workers have considered leaving their employer, while the American Association of Critical-Care Nurses found that 66 percent of acute and critical-care nurses have thought about quitting nursing entirely.

Atlantic reporter Ed Yong talks to a number of doctors and nurses who have left the professions they thought would be their lifetime jobs, and others who are still in the slog. For too many, the stress and constant death have left them with nothing more to give; it's a sobering look at how stress and anguish, and so many Americans' refusal to take the pandemic seriously, have combined to burn through much of the workforce that we're still relying on. It's not a cheerful story, but it's important, especially as case numbers are starting to rise again in parts of the country.

Here's how medical staff at Providence Portland Medical Center in Oregon discussed the stress in August:

Keep A Flamethrower On Someone, They'll Burn Out

The idea that's likely to stay with me is that "burnout" is probably not the right word for what these folks are experiencing:

Gerard Brogan, the director of nursing practice at National Nurses United, dislikes the term because "it implies a lack of character," he told me. He prefers moral distress—the anguish of being unable to take the course of action that you know is right.

Health-care workers aren't quitting because they can't handle their jobs. They're quitting because they can't handle being unable to do their jobs. Even before COVID-19, many of them struggled to bridge the gap between the noble ideals of their profession and the realities of its business. The pandemic simply pushed them past the limits of that compromise.

Again and again, the stories these hospital workers tell come back to how COVID is making the work nearly impossible, because so many of the patients they see just don't get better. Like most of us, they felt that sense of relief when vaccination rates rose to the point in summer 2021 that it seemed like "normal" was going to return, but then when cases starting to increase rapidly because of the Delta variant, healthcare workers were once again slammed, hospitals overwhelmed, and previously unthinkable calculations about who had the best chance of surviving had to be considered.

Fox News Does Its Part

Also, Yong notes, the patients themselves are often harder to deal with than in the first year of the pandemic:

Most now are unvaccinated, and while some didn't have a choice in the matter, those who did are often belligerent and vocal. Even after they're hospitalized, some resist basic medical procedures like proning or oxygenation, thinking themselves to be fighters, only to become delirious, anxious, and impulsive when their lungs struggle for oxygen. Others have assaulted nurses, thrown trash around their rooms, and yelled for hydroxychloroquine or ivermectin, neither of which have any proven benefit for COVID-19. Once, Americans clapped for health-care heroes; now, "we're at war with a virus and its hosts are at war with us," [Idaho nurse Cassandra] Werry told me.

Another nurse, Artec Durham, from Flagstaff, Arizona, told Yong that dealing with all of it has left him numb in a way he hadn't experienced before in his career, and that it's very unsettling:

"We want to be rooting for our patients," Durham told me, "but anyone I know who's working in COVID has zero compassion remaining, especially for people who chose not to get the vaccine." [...] For a health-care worker, being shaken by a patient's death comes with the job. Finding yourself unmoved is almost worse.

Corporations Are Evil Too, My Friend

And of course, there's the capitalism. While doctors and nurses have been working almost non-stop, the corporations that own the hospitals just haven't seemed to be concerned about anything but costs. Medical staff are working longer hours and more shifts even as benefits and raises are cut, and the lack of institutional support is making the job even harder. One hospital offered some handy wellness tips, like "keeping gratitude journals." That surely helped oodles.

Yong says he wasn't able to get an interview with the American Hospital Association, the professional organization for hospital administrators. Instead, the group sent him links "to a letter that criticized anticompetitive pricing from travel-nursing agencies and to a report showing that staff shortages have cost hospitals $24 billion over the course of the pandemic." What, he wanted tips on how to turn that frown upside down?

Many of the former healthcare workers Yong interviewed told him that had really been the deciding factor — COVID was bad enough, but institutional indifference made them wonder why they bothered to keep going to work.

Molly Phelps, an emergency doctor of 18 years, considered herself a lifer. Her medical career had cost her time with her family, wrecked her circadian rhythms, and taxed her mental health, but it offered so much meaning that "I was willing to stay and be miserable," she told me. But after the horrific winter surge, Phelps was shocked that her hospital's administrators "never acknowledged what we went through," while many of her patients "seemed to forget their humanity."

Eventually, she says, she was no longer able to feel the sense of fulfillment that had previously kept her going, and she decided to quit.

How Do We Fix This?

The piece includes this note of almost-optimism: Despite the wave of people leaving medicine, there's actually been an influx of people applying to medical and nursing schools. Dr. Esther Choo, an ER doc at Oregon Health and Science University, told Yong she thinks the newcomers are

apparently seeing the best of us, and maybe their vision and energy is what we need to make us whole again. [...] We need to say, "We got this wrong, and despite that, you're willing to invest your lives in this career? What an incredible gift. We can't look at that and change nothing."

The current situation certainly isn't sustainable, since so many people are leaving the healthcare workforce, and the people left behind have to pick up the slack, piling on more stress and interrupting whatever sense of established teamwork there'd been. The new crop of medical workers will have to deal with the consequences of brain drain in the professions:

Expertise is also hemorrhaging. Many older nurses and doctors have retired early—people who "know that one thing that happened 10 years ago that saved someone's life in a clutch situation," [nurse] Cassie Alexander said. And because of their missing experience, "things are being missed," Artec Durham added. "The care feels frantic and sloppy even though we're not overrun with COVID right now." Future patients may also suffer because the next generation of health-care workers won't inherit the knowledge and wisdom of their predecessors. "I foresee at least three or four years post-COVID where health-care outcomes are dismal," Cassandra Werry told me.

We're not out of the woods yet, to say nothing of the next pandemic down the road. This is where we'd end on an optimistic note, but all we can think of is that scene in Watchmen where the cynical superhero Rorschach, considering the horrid mess of humanity, predicts that someday they'll "look up and shout 'SAVE US!'...and I'll look down and whisper 'No.'"

Lucky for us, healthcare workers, unlike Rorschach, have that Hippocratic oath and sense of duty to keep them going. If we want them to keep at it, we might just need to make some changes so they'll stay.

[Atlantic / Image: screenshot from video by The Oregonian]

Yr Wonkette is funded entirely by reader donations. If you can, please give $5 or $10 a month so we can keep this little mommyblog going. We aren't burnt out, just a little toasted at the edges.