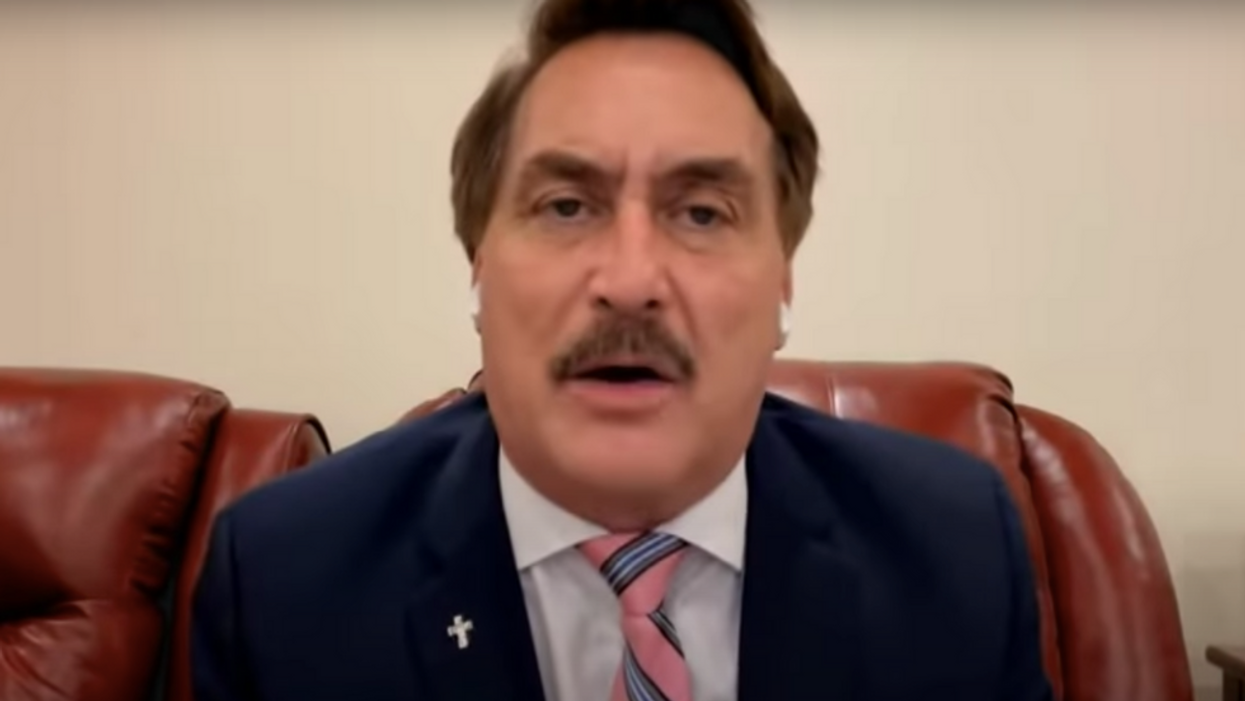 Of all the crazies in Crazytown, none has had a crazier year than pillow fluffer Mike Lindell. From the heady days of martial law to the depths of despair when no one would be his hot date to SOTU, it's been a wildass ride for the pillow dude. And all the while he assured us that the return of the king was imminent. In the spring, by August at the latest, or possibly Thanksgiving.

It's that rare feelgood story where someone is so fucking nuts that they actually discredit their very bad ideas — and these days it takes a lot to persuade Americans that something patently false is actually, you know, not true.

It started in January when Commander OpSec was photographed leaving the White House with his notebook open revealing a plan to impose martial law, seize the ballots, and invoke the Insurrection Act to keep Trump in power. As one does.

He followed that up with a defamation suit against the Daily Mail for linking him romantically with actress Jane Krakowski, because how dare they say he bought a beautiful woman wine when he is singularly dedicated to destroying democracy? Spoiler Alert: LOL, nope.

He also got booted off Twitter because CANCEL CULTURE. Later in the year, he got banned from Fox, too, when it turned out that Dominion and Smartmatic weren't actually joking about filing those 10-figure defamation suits.

In February, Lindell collaborated with the Holy Spirit to put out a three-hour documentary called Absolute Proof which "proved" that the election was stolen. Then he got hit by Dominion Voting Systems with a $1.3 billion defamation suit in federal court in DC; that's one dollar for every whopper he told about the company, we guess. You'd think the Holy Spirit would have given him a heads up!

But the Pillow Pumper wasn't taking that one lying down, nosirreeebob! After spending all of March screeching that he and Alan Dershowitz (of freakin' course) were going to file a lawsuit against Dominion for Defamatory RICO McCarthyism, he actually docketed a countersuit against Dominion. In Minnesota. Asking the court to rule that the lawsuit in DC was UNLEGAL.

He also launched his new social media platform Frank Speech that was going to put Twitter and YouTube out of business by banning swears and cancel cultures.

Mike Lindell announces that he'll be unveiling a new social media platform within two weeks that will put both Twitter and YouTube out of business.pic.twitter.com/PsDuBOWd5H
— Right Wing Watch (@Right Wing Watch) 1615485708

Lindell kept promising in his weekly scream therapy sessions with putrefying podcaster Steve Bannon that Trump's return to the White House was imminent. But when God failed to open the door to the Oval Office, the Pillow Man decided he'd have to open a window with a CyberFraud Hootenanny Hoedown in Sioux Falls at which he would prove to all the assembled experts that China hacked the election with PCAPS. Instead his own cyber expert admitted they didn't have the goods, after which Lindell blamed the CIA and Antifa, then threatened to sue all the backstabbers who prevented him from saving the country.

Undaunted, Lindell regrouped by September with a new plan. Well, a recycled plan, really, since that shitbird Texas AG Ken Paxton tried it last year and fell on his face. But Lindell was certain that the Supreme Court would take one look at all his very good evidence that China used bluetooth technology to hack elections and vote 9-0 to return Trump to the presidency. All he needed was one state attorney general to sign on, triggering the high court's original jurisdiction, and he could skip over all those pesky trial and appellate judges with their dumb rules about "standing" and "evidence" and "objective reality."

Lindell spent all of September and October promising that he was out on the town having the time of my life with a bunch of his state AG friends. And while none of them was willing to come forward, they were all just out of frame, laughing too at the fun they'd have delivering this lawsuit to SCOTUS on Thanksgiving.

It was all just pillow talk. None of the AGs materialized, which Lindell blamed on the RNC's Ronna Romney McDaniel. Obviously.

And speaking of traitors, turns out Republican election officials get kinda testy when Mike Lindell comes in and says their elections were hacked. The MyPillow man got the MyBoot from Idaho and Alabama after spewing nonsense about their states being vulnerable to electoral hacking. Silly Mike, everyone knows that's only a thing in swing states!

So the year is over, and Mike Lindell ain't got no girlfriend; he didn't take out "Suckabuck and Dorky"; he didn't return Trump to the White House. But fear not, true believers, because if you just keep the faith — and keep buying those pillows — paradise is just around the crazy corner.