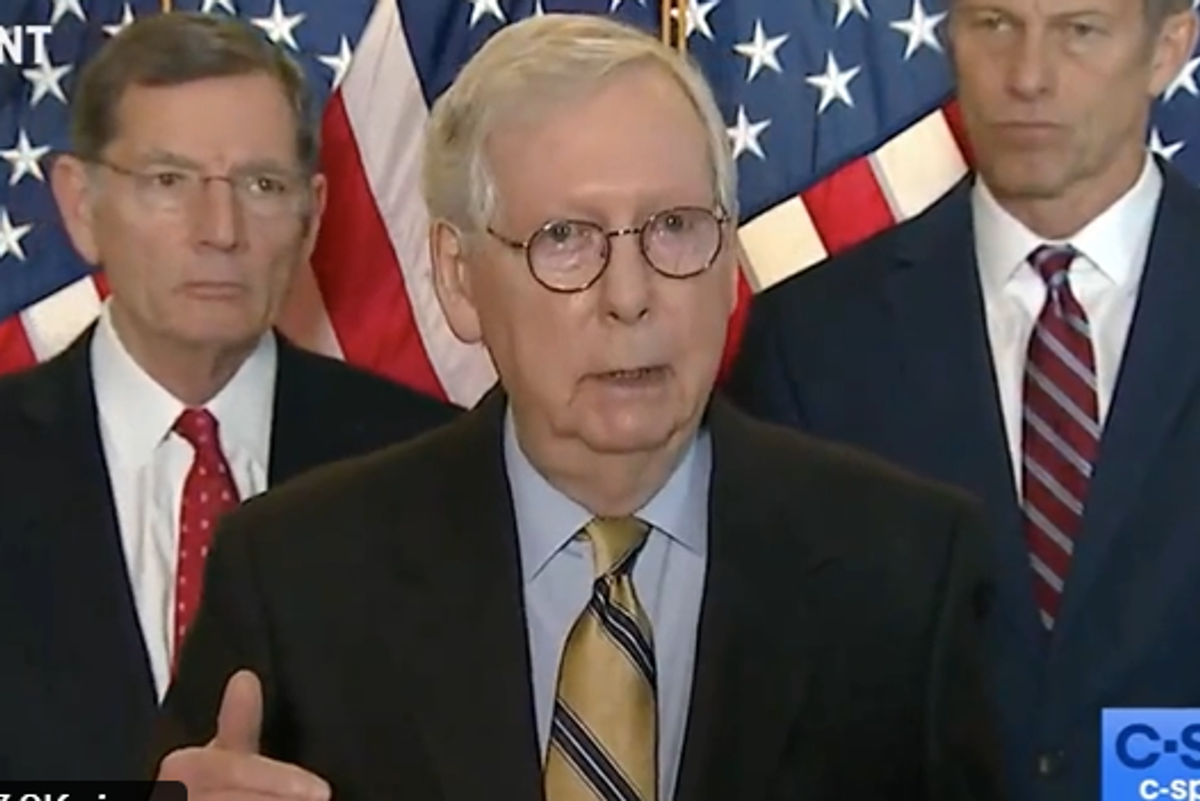 There's a video of Mitch McConnell going around where he pretends not to understand why Democrats don't trust Republicans — who are busy passing laws allowing themselves to overturn their states' future election results — on future elections. Wearing his best innocent face, he says it would be just CRAZY to think Republican state legislatures would be dumb enough to try to thwart the will of their state's voters, just CRAZY. Are we saying that the people elected to those legislatures are IDIOTS?

In the video, the minority leader is talking about the latest Democratic proposals to protect democracy, which Senate Majority Leader Chuck Schumer says are high priority this month.

Mitch McConnell on Dem voting rights bill: "The notion that some state legislature would be crazy enough to say to their own voters, 'We're not gonna honor the outcome of an election,' is ridiculous."\n\n(Hundreds of GOP state legislators supported efforts to overturn 2020 results)pic.twitter.com/j82rlii915
— The Recount (@The Recount) 1641329439

McConnell says those elected Republicans have to answer to those same voters who vote in those elections, as if to bolster his feigned confusion over why Democrats would think Republicans would act nefariously. Of course, we answered that right there in the last graf when we said "gerrymandered" and "authoritarian control."

Does anyone think in an actual democracy that Republicans would have super-majorities in legislatures in half-and-half swing states like Ohio, Wisconsin, North Carolina and others? No. The Republican party is a fascist party hellbent on total white supremacist control, and it's been working for decades to make that total control happen. Elected Republicans in gerrymandered swing states aren't answerable to the voters. At least not to average voters in their states. They've drawn their districts so they're only answerable to the white supremacists who put them into their gerrymandered seats, who believe in their white supremacist plans.

And of course, it's in some of those very swing states where Joe Biden beat Donald Trump, either handily or by a hair, which is why Trump and his loyal Republican manservants in those states have been trying to overturn their results since the beginning.

Igor Bobic notes just a few examples of how this is literally what state-level Republicans have been trying to do ever since Trump's second humiliating loss. (The first one was 2016, when Trump only "won" because of our archaic slave state Electoral College system, with reacharounds from Russia and James Comey, but still was overwhelmingly rejected by millions of the actual American people.)

The Republican leaders of Pennsylvania’s House of Representatives, for example, signed on in support of a pro-Trump lawsuit that sought to overturn Biden’s win in their own state, as well as in three others.

Trump’s campaign paid a lawmaker in Arizona while he pushed for the state legislature to overturn Biden’s victory there.

One official in Trump’s Department of Justice even wanted to send a letter to lawmakers in Georgia in December 2020 offering a road map for how lawmakers could justify calling a special session and appointing their own alternate slate of electors.

Bobic further notes that shitloads of white fascist party candidates are running right this second all over America on platforms that say they'll help steal future elections for the white fascists.

Obviously our purpose in offering all that rebuttal evidence to what Mitch McConnell said is to emphasize that Mitch McConnell is only pretending to be ignorant, he knows exactly what his party is up to, and he can and should go fuck himself without lube in the sharp crevices of his own turtle shell.