If you spent your Thanksgiving sucking at the bowels of the rightwing internet, you were privy to some BIG MAJOR NEWS. No, not the thing about how Kamala Harris bought a nice pot in France. (It's true! Kamala Harris, the vice president, was in France, and while there she bought a nice piece of cookware. And highly paid professional wingnuts melted down pretending they were common peasants with no idea what decent cookware costs and that Harris is literally Marie Antoinette.)

We are talking about the story of the REAL (not real) Marie Antoinette, whose name is Nancy Pelosi. This was worse (not worse) than when Princess Cookies 'n' Cream Vanderbilt Rothschild Pelosi revealed she has a double fridge with deluxe ice creams in it.

The story was that Nancy Pelosi had bought a $25 million home in Jupiter Island, Florida. WHOA IF TRUE! Except it wasn't true, it was just rightwing Twitter bullshit, that thing where they all make up a story together and agree to believe it, like QAnon or Reaganomics.

The lib-owning idea went something like this: Nancy Pelosi and her ilk have overreacted to COVID-19 at every turn. Ron DeSantis is a freedom loving governor of the greatest state in America. And now Pelosi was all but admitting that DeSantis was right by spending $25 million on Florida real estate. What an elitist hypocrite!

Okeydoke. We could note that if somebody is buying a $25 million property on Hobe Sound in Jupiter Island, they're really not having to subject themselves to very much "Florida," but that would be tacky of us to say.

And anyway, the story isn't true.

But apparently it really got its legs when it was picked up by a wingnut website called Big League Politics on November 24. The Bulwark notes that we should look at the ads on the site: 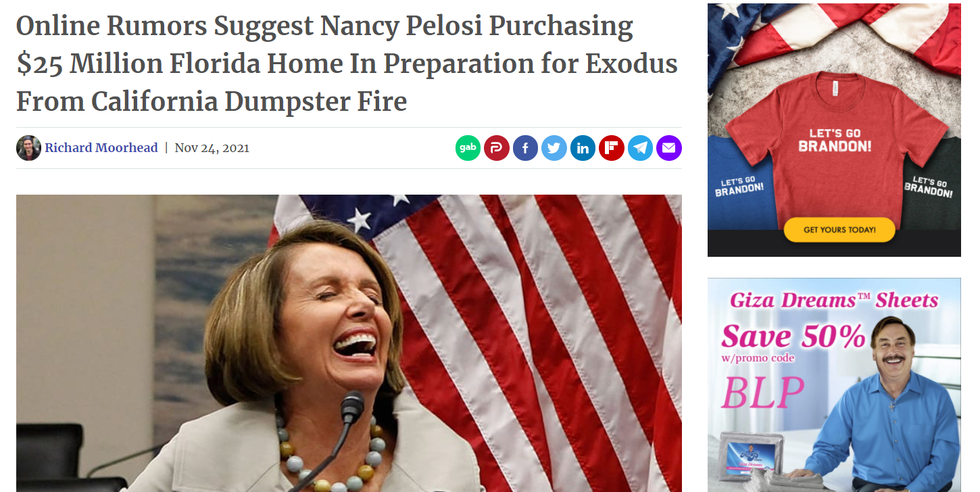 Of course, the headline says merely that "online rumors suggest" Pelosi is buying a big house. Let's see if the story is so circumspect:

Hahahaha imagine being the dork who wrote that.

is reportedly finalizing the purchase of a $25 million mansion in South Florida, departing California amid the state’s decline as a result of policy she’s long supported.

You know, because it's a sincerely held wingnut religious belief that people are leaving California in droves because "liberal policies." As opposed to it just being too fuckin' expensive because too many people want to live there. But sure, Nancy Pelosi is trying to get away from Nancy Pelosi!

But wait, "reportedly" according to whom?

Pelosi is slated to become a resident of Jupiter Island in Martin County, an elite community with the distinction of its residents possessing the highest per capita income of any municipality in the United States.

Sources cited elite South Florida real estate brokers who confirmed Pelosi was in the closing stages of the purchase of the property.

Oh, it's "sources." And who are "sources"? There's a now-deleted tweet from some douche named Gabe Hoffman that says he "Just checked with top broker in area who confirmed this information." The other "source" appears to be the very same Big League Politics writer, with his own SCOOP! several weeks ago that said Pelosi was house-hunting in Florida. And who were the "sources" for that? "Multiple witnesses." Which witnesses? Well for instance Marjorie Taylor Greene, who seen Pelosi with her own eyes. Looking for houses? No, just on an airplane.

But that grunting dipshit definitely knows why Pelosi is moving to Florida, and it is "mask free hair salons."

So we see how this particular sausage is made, and good lord, realizing what goes into that sausage is enough to make a person for real throw up.

And from there it just went everywhere. It was on the website of Sean Hannity's favorite pretend investigative journalist Sara Carter, and even Hannity's own Twitter account sent it out. Dinesh D'Souza blew it out his ass. It was in the Washington Examiner, in a story that apparently got surreptitiously edited several times, according to the Bulwark. (Now it concedes that the original story "may just be too juicy to be true." Maybe.)

The South Florida Sun Sentinel had to do a full debunking the day before Thanksgiving, after the rumors started flying, because it was just obnoxiously everywhere. Drew Hammill, Pelosi's deputy chief of staff, explained that "There’s no such pending sale nor is the family looking or interested." And it's not just Pelosi's people, but also the listing agent on the house in question:

“I can confirm the buyer is NOT Nancy Pelosi,” said Beth Bourque of Southern Shore Properties, in a text message, using capital letters for emphasis.

Because Pelosi’s husband, Paul Pelosi, owns a real estate investment company, Hammill was blunt when asked if it was possible that Paul Pelosi or a corporate entity linked to him might have been the buyer.

Asked if the buyer was anybody affiliated with Pelosi, or even a corporate entity possibly linked to Pelosi, Bourque, the seller’s agent, said no.

The story was also well-debunked by a journalist named Claudine Zap at Realtor.com. Because that's what Realtor.com really wants to be spending its time doing when it could be doing blogs about the Property Brothers and what colors to paint your bedroom for $$$.

In summary and in conclusion, this has been another complete waste of our time, brought to us by the worst Americans God ever accidentally breathed life into instead of throwing them in the discard pile.

Wake us up if Pelosi buys a Le Creuset pot, like a REAL oligarch.