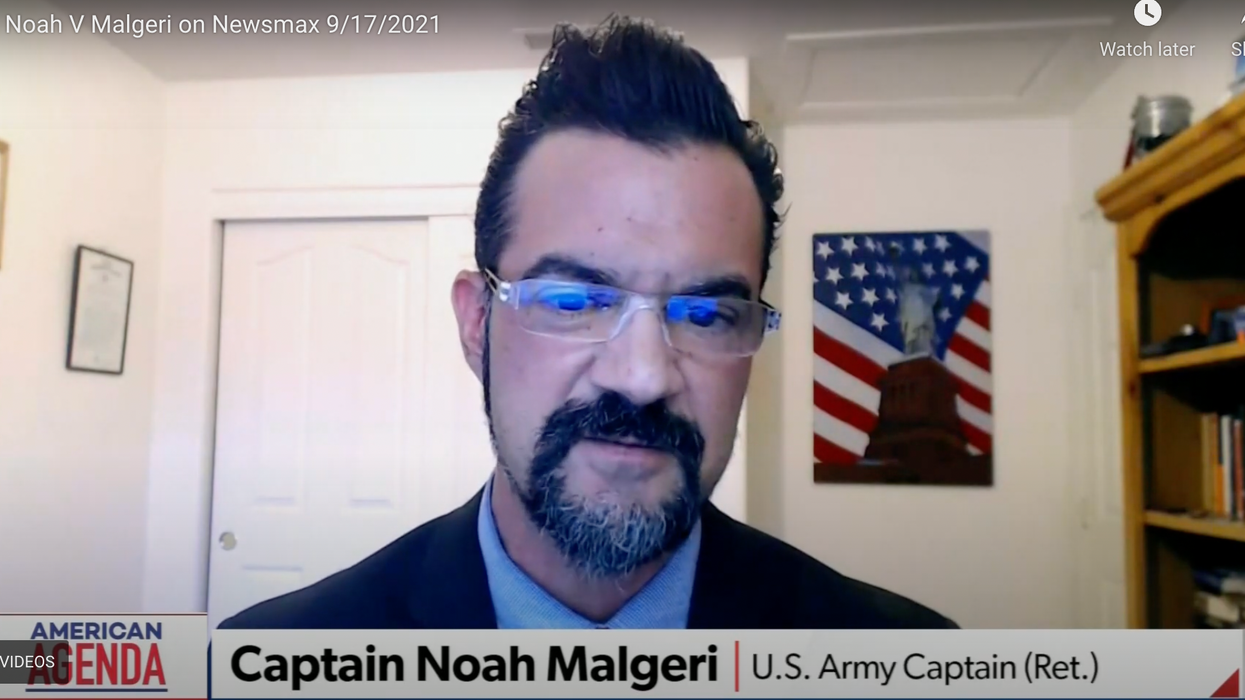 Here's one Gipper cheerfully explaining on live television that we just need to execute General Mark Milley, Chairman on the Joint Chiefs of Staff. Justice demands nothing less!

"It's clear under the UCMJ, we don't need a congressional commission to investigate the crimes of Mark Milley, all the evidence is out there. All we need to do is — he's an active duty soldier — just convene a general court martial and forget a congressional hearing," Nevada GOP congressional candidate Noah Malgeri told wingnut veteran activist Steve Sanson, as if this were something that made complete sense.

"We need to get back to our patriotic, liberty-loving roots. What did they used to do to traitors if they were convicted by a court? They would execute them. That's still the law, in the United States of America," Malgeri continued, getting more animated.

"I think if he's guilty of it, by a court martial and so forth, they should hang him on CNN. I mean, not CNN, they're not going to do it on CNN, but on C-SPAN or something."

On Newsmax, Malgeri shouted that Milley had "pledged his allegiance" to the Chinese government because he placed two calls to his Chinese counterpart to assure him that a US attack was not imminent. The calls were reportedly briefed all the way up and down the Defense Department, including to Secretary Mark Esper. Nevertheless, Malgeri — a former JAG lawyer who damn well knows better — insists it was the crime of the century.

And speaking of knowing better, shout out to Sarah Ashton-Cirillo at Political.tips, who points out that Malgeri's apparent rabid xenophobia is a recent adoption as well. In fact, he took rather the opposite position as head of the Legal Aid Center of Southern Nevada.

For nearly five years, Noah Malgeri was in charge of the program, leaving just prior to his entry into the political arena. While in that role, Malgeri advocated for immigration rights on multiple occasions, including at least twice on video. Once was during "National Pro Bono Week," the other as presenter of the 20th annual Pro Bono Awards, where Malgeri personally recognized one lawyer whose work specifically focused on asylum cases.

Now that he's running for congress as a Republican, he wants to seal the border. Go figure!

It's been a rough go for Malgeri, and not just because he has to adjust to his newfound belief system. After suing his former political consultants, Republican outfit McShane LLC, for failing to live up to their contract, he got un-endorsed by Arizona GOP Rep. Paul Gosar. He's being trounced in the fundraising contest by Republican frontrunner April Becker, who picked up almost five times as much cash, as well as the endorsement of Republican Conference Chair Elise Stefanik. And the state's legislature approved a map that makes NV-03 significantly more favorable for Democratic incumbent Rep. Susie Lee, transforming it from a Biden +0.2 district to Biden +6.7.

Which is perhaps why this guy is cranking it up to 11. If you can't buy ads, you gotta go out and earn clicks by being an asshole. Luckily, it seems to come naturally to him.