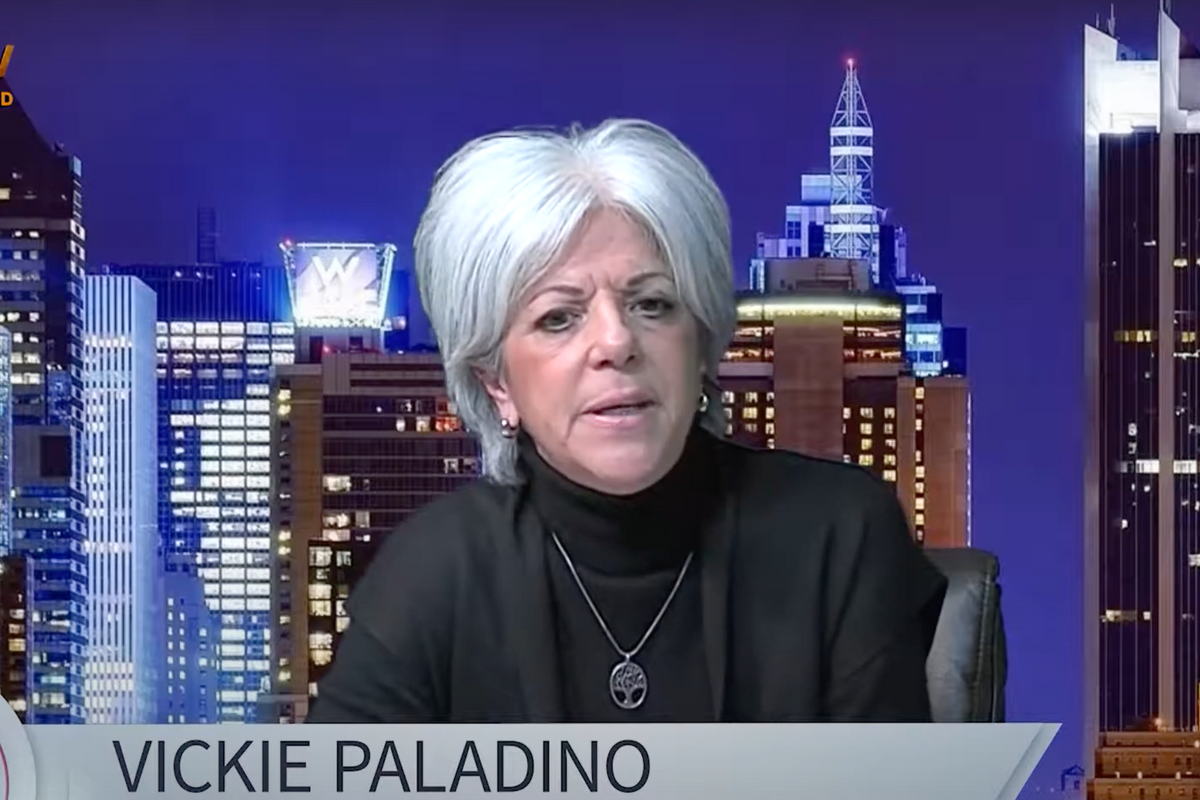 Last week, on her very first day of work, the new New York City councilwoman from Queens, Republican Vickie Paladino, was barred from the City Council floor because she refused to show proof of vaccination against COVID-19. She insists it’s “nobody’s business” whether she’s vaccinated or not (it sort of is, because Omicron is hella contagious). She’s not anti-vaccine, mind you, just anti-mandate. She’s standing up for “medical freedom,” as if she didn’t have to prove she was vaccinated against several different diseases when starting public school.

“I don’t need to show you my papers. This is not Nazi Germany,” the newly elected Queens Republican said.

It's surprising Paladino would be against Queens becoming Nazi Germany, but we guess vaccines are the bridge too far.

Still, this is a grotesque but all-too-common comparison from Republicans. Unfortunately, thanks to the GOP’s ongoing assault on education, students might not learn the key difference between Queens and Nazi Germany. They might not learn about the Holocaust at all. They’ll grow up thinking Nazis’ defining trait was an obsession with public health measures.

Today was my first day as an active member of the City Council. Unfortunately, I was barred from the chamber floor due to my refusal to submit vax status to the city. Our government is now interfering with a duly elected representative's right to access the mechanisms of office.pic.twitter.com/AA9gvfV2zR
— Councilwoman Vickie Paladino (@Councilwoman Vickie Paladino) 1641422207

Paladino claimed the "government is now interfering with a duly elected representative's right to access the mechanisms of office,” which is a melodramatic way of saying that she was expected to follow the same rules as everyone else. She tweeted:


Upon my arrival at City Hall, I was informed by Council officials that several progressive members had expressed “serious” concern over me being in the building, and was told that I'd be removed from chambers if I attempted to enter.

I'm sure these progressives were just as scared of COVID as @AOC was while partying in Miami, and this had nothing to do with left-wing crybullies trying to keep a strong anti-mandate voice out of the council chamber.

Sweet Christ, Republicans will never let up on Alexandria Ocasio-Cortez contracting COVID-19, presumably while in Miami — where she ate and drank maskless outside. They say it proves that vaccines are useless, even though Ocasio-Cortez isn’t hospitalized and dying like so many COVID-19 patients who were unvaccinated. She will live to vex them further.

PALADINO: Nevertheless, I did not want to make this day about me.

Yet, she did. She’s like the drunk cousin who makes a scene because she can’t sing at your wedding. She might’ve exercised the better part of valor last week but she warned: “Going forward, if anyone has a problem with me in the chamber, they will have to remove me.”

Paladino later told NY1 that she’s not actually looking for the fight she started. Then she began referring to herself in the third person like your typical, well-adjusted megalomaniac.

Vickie Paladino will use all her accessible body parts to fight against public health mandates. She claims vaccine mandates cost people jobs, and I can see how she thinks that’s unfair to the dummies who are willingly out of work because they won’t get vaccinated. She implied that New Yorkers don’t need vaccine mandates because they have their common sense. I lived in New York for 15 years so I don’t fully agree with her premise.

Despite New York hospitalization rates skyrocketing thanks to Omicron, Vickie Paladino just doesn’t see what all the fuss is about.

“Look, are people dropping dead to the left and the right of you? No, they’re not,” she said, adding of mandates: “Stop, stop. Enough.”

Vickie Paladino apparently thinks that unless people are literally keeling over like in the Omega Man you should stuff your commie vaccine mandates.