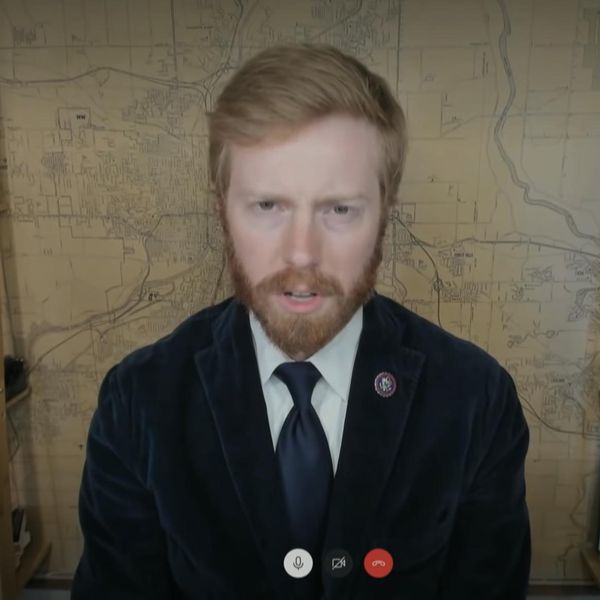 At the beginning of a new year, we take stock of lessons learned and things lost in the previous year. (R.I.P. Betty White!) But sometimes you're reminded that a new year is simply another day in the calendar and some people never learn or change. The perfect example of this is Republican Rep. Peter Meijer of Michigan. If you are unfamiliar with Meijer, he is one half of the secret and unscheduled political stunt in Afghanistan with Democrat Rep. Seth Moulton to get attention last August. He also voted to impeach Trump, which isn't an easy vote for a Republican to take, but it doesn't make him a good person. It makes him less of a terrible one.

Dressed and set decorated as if playing Jonny Quest's Dad in a failed TV pilot (or a Chuck Todd biopic), Meijer was on NBC's "Meet The Press" to talk about the upcoming one-year anniversary of the failed insurrection (and ruining of Three Kings Day for all Latinx people) on January 6.

After playing a clip of Senate Minority Leader Mitch McConnell seemingly embracing the House January 6 Select Committee, Chuck Todd reminds the audience that Meijer voted against establishing said commission because it's "not bipartisan" despite having Republican House members Liz Cheney and Adam Kinzinger. After hearing Meijer making excuses for his uneven support of accountability, Chuck Todd asked why Republicans continue to embrace Trump after the January 6 attack. Meijer then revealed that (despite the glowing The Atlantic profiles) he's just as shitty as Republicans have always been, just in a tweed jacket.

MEIJER: There was no alternative. There was no other path. And given how President Biden when he was elected into office, you know, said he would be moderate and look for bipartisan solutions, and then after — and frankly, I blame the former president for this — after we lost the two Senate seats in Georgia and the Senate flipped, it became an exercise in trying to be an LBJ- or FDR-style presidency and enact transformational change in the absence of any compelling mandate from the American people to do so. So that gave the rallying signal, that created a very steep divide. And at the end of the day, there's no other option right now in the Republican Party and that's a sad test.

Let's deconstruct this a second, shall we?

1. "There was no alternative. There was no other path." This is cowardly bullshit from Meijer. "We always have a choice" is the crux of "personal responsibility." People learn this lesson as children. Right now, you can go see a movie in which three versions (mild spoiler) of the same character teach this moral lesson to a new generation ... along with "With Great Power Must Also Come Great Responsibility." This is Beginner's Ethics 101, and something a sitting member of Congress shouldn't need fucking lessons on.

2. "Biden ... said he would be moderate and look for bipartisan solutions." Hey, Petey ... Biden tried. He's bent over backwards to negotiate with legislative shitheels & hypocritical flakes in his party, along with any Republican that wanted a chance to vote on things that should be bipartisan like infrastructure, voting rights and COVID relief. He even stood by graciously as Republicans who stalled or prevented progress on these things thanked Trump for those accomplishments he had nothing to do with. Why? Because Biden is a "get shit done" president who cares more about governing than the narcissistic need for credit.
3. "After we lost the two Senate seats in Georgia and the Senate flipped, it became an exercise in trying to be an LBJ- or FDR-style presidency and enact transformational change." Yeah, it's not like winning TWO senate seats in a historically red state like Georgia is some kind of mandate! Who does Biden think he is? A guy who got the most total votes of any president-elect and beat the incumbent by over seven million votes?! How dare he try to emulate LBJ (Civil Rights and Voting Rights Act) or FDR (The New Deal, led America through World War 2, a president so effective and loved that a Republican-led Congress had to amend the Constitution to prevent other presidents from winning more than two terms)?

Peter Mejier likes his Democratic presidents like he likes his Republican presidents: barely elected, governmentally harmful with a soupçon of regressive social movement!

Chuck Todd then asked a logical and journalistically sound follow-up (we're shocked, too), which was followed by more excuses from Meijer:

TODD: Why is it on President Biden that the Republican Party can't seem to kick their Trump habit? I mean, why isn't it on Kevin McCarthy, Mitch McConnell, and yourself?

MEIJER: Well, we have a two-party system. And in the best case scenario, each party challenges the other to do better, to be better, to have a scenario where iron sharpens iron. Instead, if you have one party plumbing the depths and the other just uses that as an excuse to go further, to go more to an extreme, to go more away from any sort of governing consensus and towards trying to enact, you know, whatever the will of the most extreme constituency they have is, you know, that is a recipe for both parties to drive further away from anything that resembles serving the American people as a whole.

Now you'd be mistaken if you saw Meijer's response as describing Republicans. Upon re-reading, you realize he's doing a "both sides." In Meijer's reality, the answer to stopping a party "plumbing the depths" is to either do nothing or move further right to appease them (the Joe Manchin strategy). That's not how the Overton Window works. (The editrix also points out that "Overton Window" doesn't work on Democrats. Everybody just gets mad about not getting the awesome thing that's too far Left to pass.) That's not "personal responsibility." Even Liz Cheney can muster more ethics than Meijer.

We will try to do better!

Fight on and have a week.

If you enjoy Wonkette, please chip in to keep us going. We are entirely ad- and investor-free, and only funded by people like YOU.