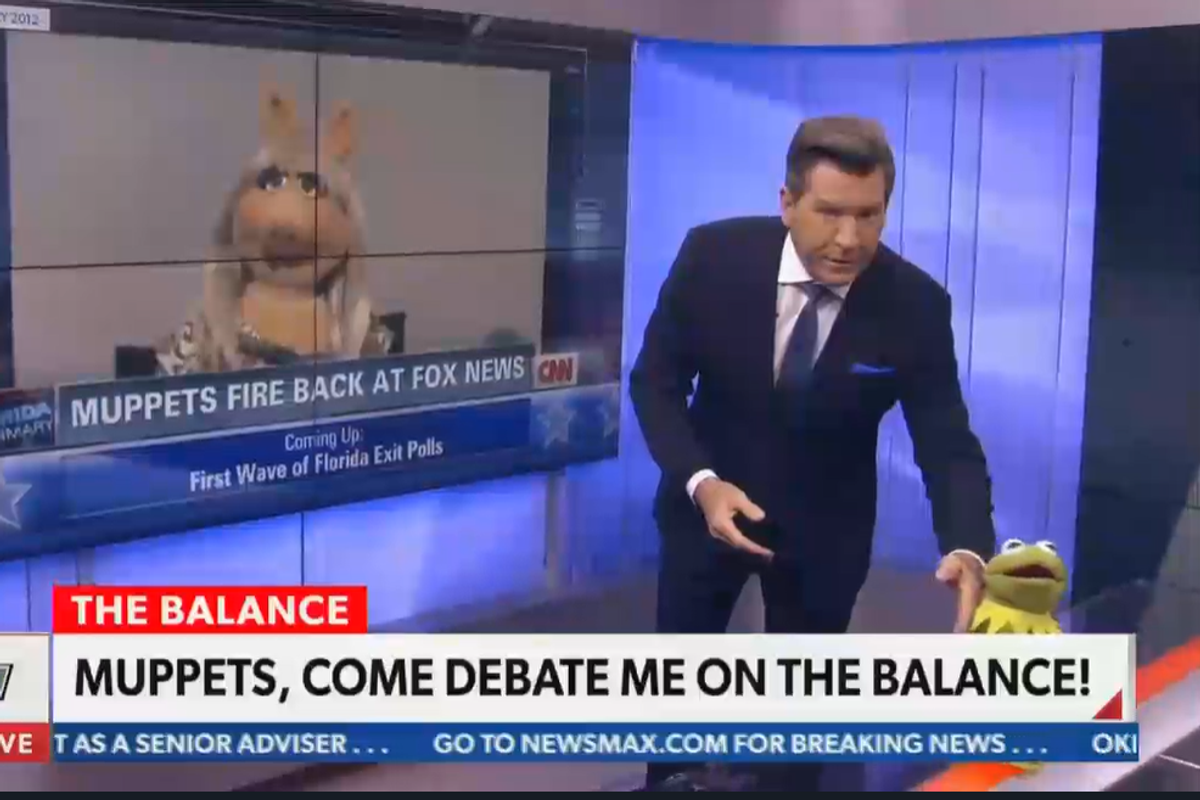 The (latest) rightwing war on Big Bird continues, and it's spreading up and down 123 Sesame Street and now one street over where the Muppets live.

Eric Bolling — a serious Newsmax person who was canned from Fox News for you know why — spent some time yesterday verbally abusing Kermit the Frog and impugning the frog's masculinity. Wait, really? Yep. That's what they're doin' at Newsmax, Kermit the Frog is a wussy boy and, um, you betcha!

But listen, it's weirder than that. Because you know how mediocre dumpy white men always scream "DEBATE ME!" — usually at women and people of color who threaten them and make their winkuses feel small? Wingnuts really like to scream it at Alexandria Ocasio-Cortez. It's not actually debate they want, per se, but rather the validation of being able to demand a debate, and then have these people acquiesce to those demands, on the white man's terms. It's why their screams of "DEBATE ME!" get shriller the more they're ignored.

We regret to inform you that Eric Bolling is doing the "DEBATE ME!" thing, shouting and stomping his feet at ... Muppets.

ERIC BOLLING: Guess what? The invite's still open Ms. Piggy, if you or your emasculated frog boyfriend, Kermit, ever wanted to join this desk, it's free. So yeah, at first I thought they were mere ideologues and now I think they're just stuck on stupid.

That quote came after Bolling explained that "Big BIRD!" was "indoctrinating our five-year-olds." We typed it like that — "Big BIRD!" — because that's how Eric Bolling said it. You know, the way literally no one ever born says it. "Big BIRD!" No you fucking loser, the emphasis is on "Big," Jesus fucking Christ what the fuck.

He played the Big BIRD! clip, and this was the chyron: 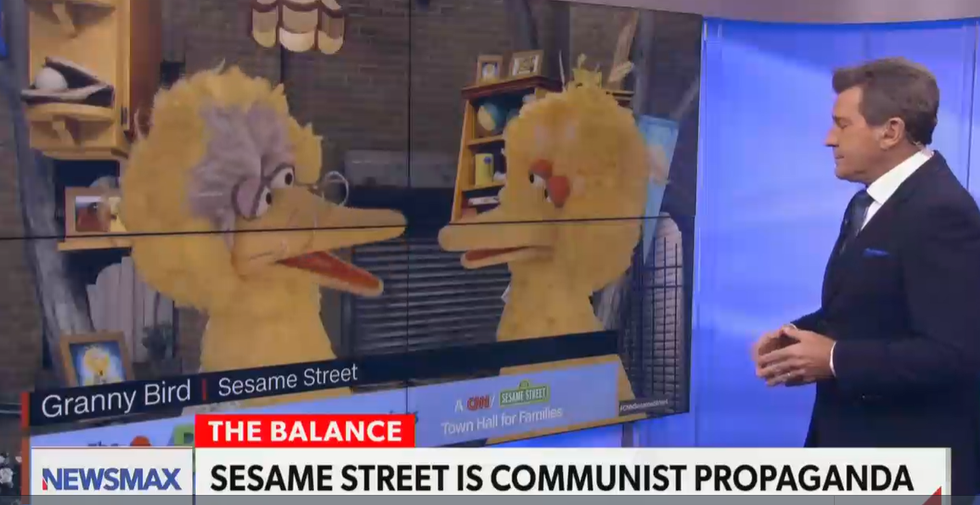 Bolling referred to the Sesame Streeters and the Muppets as "these little felt communists," saying this isn't the first time they've "tried to infect the minds of our youngest and most vulnerable children."

That's when Bolling played a clip of himself on Fox News in 2011, when he says he personally "called out" and "took to task" that "cute little green monster commie" Kermit the Frog, for being mean to fictional oil tycoon Tex Richman in The Muppets, which came out that year. Apparently this is a thing Fox News idiots were mad about.

In the clip from 10 years ago, Bolling addressed a puppet knockoff of Kermit he was holding on Fox News's "The Five," saying, "Froggie, what's his name?" You know, because Eric Bolling is aware of all Muppet traditions. Reminded of the frog's name by others on the panel, he continued, "Kermit, Miss Piggy, if you want to debate this anytime, I'm all for it." And he suggested Donald Trump could moderate. In 2011. Really.

Bolling explained, however, that his 2011 "DEBATE ME!" shrieks "didn't sit well with one portly pink dummy, who took to the media to trash me for exposing her leftist tyranny." And it's true, Miss Piggy threw some shade at Fox News soon after, in 2012.

So, having caught us all up to speed on his history of having debate requests ignored by Muppets, that's when Bolling said the above quote about Miss Piggy OR HER EMASCULATED FROG BOYFRIEND. After the word "boyfriend," he paused for (dramatic? comedic?) effect and knocked over the knockoff Kermit he had placed on the set with him. 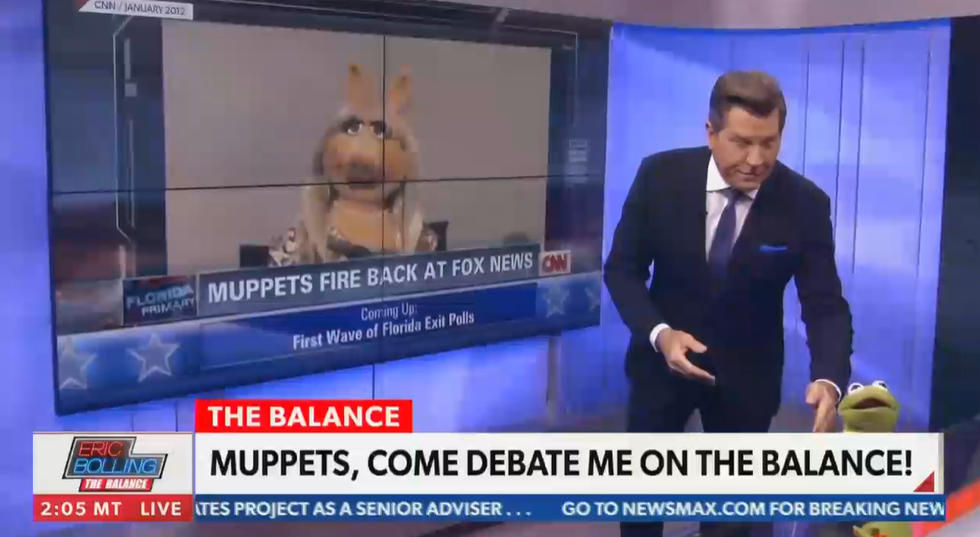 "So yeah, at first I thought they were mere ideologues," said Bolling, "and now I think they're just stuck on stupid."

Now, we should be clear that Bolling appears to be trying to be at least somewhat silly here. (You know that thing they say on the internet about "The Right is starting to get better at comedy and it's making lefties nervous." For sure.) But the problem, as is often the problem with dumpy mediocre white men, is that there is this weird, irrational, visible rage bubbling just underneath. It's pretty clear he's on some level pissed that these Muppets have not debated him, and will not.

As if to exhibit his impotent rage further, he continues by saying "they don't GET IT!" and then shows a graphic of Joe Biden holding a sign that says "Let's go Brandon," while explaining that when half the country disagrees with the Muppets, it's not the Muppets' job to tell us what to do, it's the Muppets' job to, um, listen to the half of America that ...

No we fucking swear, that's what happened! 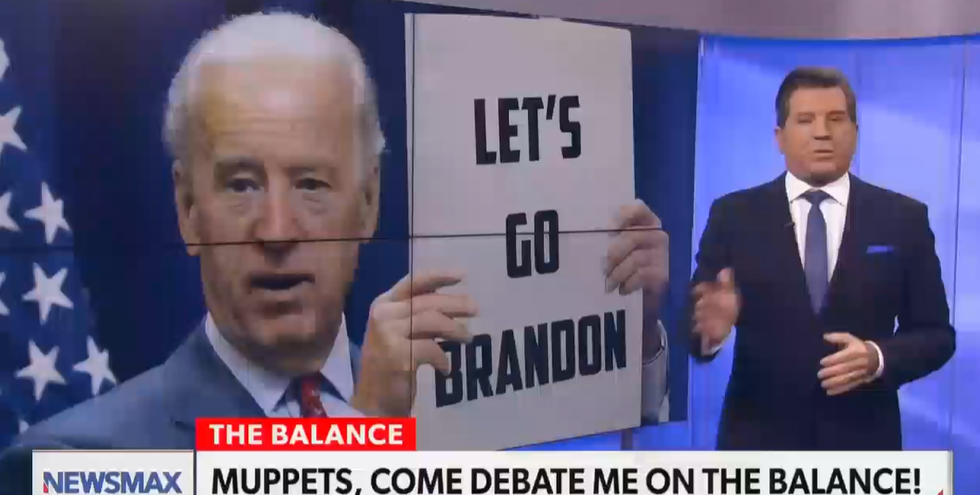 This is our goddamn country now.

In summary and in conclusion, Hillary Clinton made a funny related to all this on the internet this week.