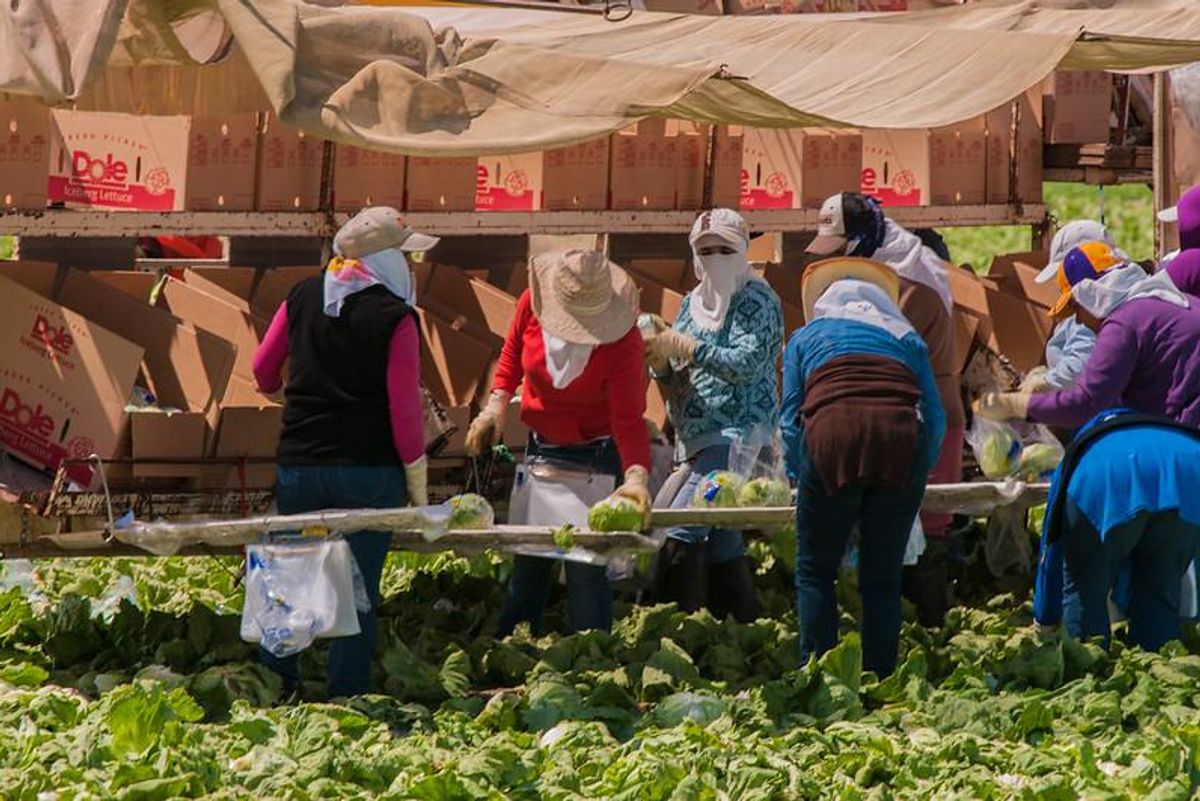 For a genuine feel-good story in this second autumn of our COVID hellscape, take a few minutes to read this lovely story from nonprofit reporting outfit — dare we call it a collective? — Zócalo Public Square, about the astonishing success of vaccination efforts among agricultural workers in California's Salinas and Imperial valleys. Reporter Joe Mathews starts with this statistic: In the small town of Gonzales, California (population 9000), 98 percent of eligible residents have had at least one dose of the coronavirus vaccine. That number may dip for like five minutes this week while the town gets all the five- to eleven-year-olds vaccinated.

Gonzales is a bit of an overachiever in vaccination rates, but other parts of California's Lettuce Belt (a garment only advised for the exhibitionists) aren't far behind, with far higher vaccination rates than the state average:

The city of Salinas, the de facto capital of the lettuce-growing valley, also boasts a vaccination rate above 90 percent, well above the statewide average and the vaccination rate on the whiter, wealthier Monterey Peninsula. Meanwhile, Imperial County, along the U.S.–Mexico border, is the most vaccinated place in the southern part of the state, as CalMatters first noted. Imperial boasts an 86 percent vaccination rate (at least one dose) — 10 points higher than L.A., Orange and San Diego counties, and 20-plus points higher than San Bernardino and Riverside counties.

By comparison, a lot of other rural parts of California are far below the state vaccination average, and have seen hospitals crowded with unvaccinated people during the recent surge in Delta variant infections. Also too, as Mathews notes, there's a pretty notable demographic character to these highly vaccinated communities:

[Both] the Imperial and Salinas valleys have large populations of younger Latinos working in agriculture and essential industries—the very demographic other parts of the state are struggling to vaccinate.

Mathews explains that the two areas, some 500 miles apart, aren't just agricultural regions, but that there are a lot of connections between them — they're almost like one community in two places, sharing

networks of companies, mechanics, and workers who operate in the Salinas Valley through summer and fall, and the Imperial Valley (and neighboring Yuma, Arizona) in winter. It's not uncommon to find agricultural workers with residences in both places.

The farmworker community in California was hit hard by the first wave of COVID last year, much as immigrant workers in Midwest meat processing plants were, with patchy provisioning of personal protective equipment and testing. The rates of infection were as much as three times those in the population overall. But lessons got learned, and — here's the secret sauce — labor and growers and healthcare systems and local governments worked together to coordinate fixing that:

In the Salinas Valley, the Grower Shipper Association, an agricultural industry group, and Clinica de Salud, a community health clinic, shared an award for their joint efforts to protect workers. Together, they provided workers with personal protective equipment and quarantine housing, and, in 2021, they helped organize mass vaccination campaigns in the fields and at well-known sites like the Salinas Sports Complex. While the growers offered time off and transportation for vaccination, the clinics provided the doctors and nurses to do the jabs.

Sort of makes you wonder what the Fox News viewership in those areas thinks, too. People working together to tackle a public health crisis, with nobody marching on the county courthouse shouting about Liberty while toting AR-15s? (Oh yeah, you can't have those in California either.)

In the Salinas Valley, the joint vaccination effort even applied for and received its own supply of the vaccines from the federal government, moving things along without the state government needing to be a middleperson. Also too, both valleys had already done community organizing around protecting workers from dangerous pesticide use, and for the 2020 Census.

In the Imperial Valley and Yuma, a similar ethic of collaboration prevailed, getting vaccines to people in the tiny towns where they were, and even sending vaccination teams to border crossings, since many ag workers live in Mexico and commute (yes, legally, if there are any trolls visiting) to farms on the US side.

Another big difference from other parts of the US: The two regions valued their community health workers and hired more of them, instead of marching and shouting obscenities outside their county health officials' homes in the middle of the night. Maybe there's something in the water. And those health workers took the "community" part of the job seriously. These next paragraphs, specifically about the effort in Gonzales, made me a little bit misty, and even more, made me jealous of what can happen when good people demand good government:

These community health workers went door to door, and into apartment buildings, schools and businesses, to build relationships with residents. They brought free food boxes, from three local food pantries that the city set up early in the pandemic, to quarantined residents. They also became certified COVID-19 testers. This helped them reach vaccine holdouts, who, after testing negative for COVID-19, were quickly registered for vaccine appointments.

The city's vaccination campaign has been relentless—with many organizations partnering to host over 20 mass vaccination clinics since February at the high school, the small and independent Gonzales RX Pharmacy, and the local Catholic church. To make sure there were always enough people in town who could give shots, the city had five Gonzales firefighters certified in administering COVID-19 vaccines. In addition to these personnel, nursing students from nearby Hartnell Community College and pharmacy staff also handled inoculations.

"It's very hard for people to say no, with the accessibility and ease of the process," Carmen Gil, Gonzales' director of community engagement, told me.

The trick to making that work in more places, it seems, is to find ways to get institutions and stakeholders (ugh, put a dollar in the management buzzword jar, Dok) who can really work together and bring disparate groups, interests, and resources together.

Easier said than done, but as far as we can tell, it's mostly a matter of organizing and doggedness, not of having better people, more money, or any magic communitarian fairy dust. It almost sounds ... what's the word? ... revolutionary.

Yr Wonkette is funded entirely by OUR community of readers. If you can, help keep this little mommyblog going with a monthly $5 or $10 donation. You don't even have to call us "comrade" unless you wanna.