Skip to content
You want an explanation for Terry McAuliffe's loss in Virginia yesterday, and for the fact that Phil Murphy will either lose in New Jersey or -- based on where the uncounted votes are -- barely eke out a win? Here's a partial explanation: 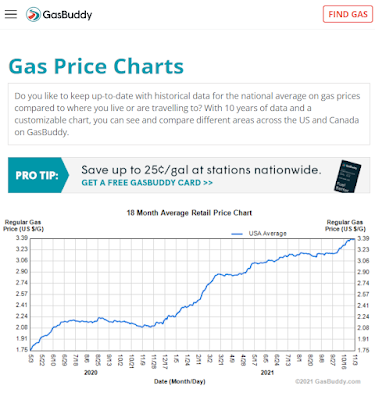 I saw this tweet shortly before the polls closed in Virginia:

When’s the last time you saw education this high in a “most important problem” exit poll? This is a sign that false CRT messaging from the GOP has worked. #TheWritingontheWall pic.twitter.com/vBKJ0C1xhO


Sure, but the economy is still #1. And for a large percentage of Americans, the most disturbing economic indicator is high gas prices.

And the pandemic is not under control and Fox News and the rest of the right's propanganda apparatus were able to make critical race theory into a big story in Virginia. But CRT doesn't explain everything.

Feels like the NJ margin should really force people off their Youngkin/VA-specific takes.

... the real reason for this defeat: President Biden is unpopular.... Why? A sour public mood about the economy driven largely by rising prices for basic commodities and shortages of various consumer goods. Then there’s COVID. President Biden ran on bringing the pandemic to heel. But that hasn’t happened. I’m not blaming Biden for that. A virus is a tough and unpredictable opponent. It’s just the fact of the situation. People want COVID to be over. But it’s not over. He’s the President. He takes a hit for that.

Then there’s the other problem: President Biden looks weak. The pull out from Afghanistan plays some role in this. But the real driver is the months long spectacle of the President and his party unable to pass the basic legislation that makes up his agenda. Negotiating, begging, false starts, canceled votes. A President of the United States stymied by two obscure Senators the vast majority of Americans have never even heard of. Obviously this has deeply demoralized Democrats around the country – a fact which I think played a significant role in McAuliffe’s defeat. But for less committed voters – a smaller portion of the electorate but the floating segment that decides most elections – the President just looks weak. He says this and that is important but can’t seem to get this or that done. It’s through that prism that these voters view an uncertain economy. Regardless of what the President is trying to do, he can’t do it. If you’re not terribly ideological or plugged into the policy and legislative details what you see is a country beset with problems and an ineffective President. That’s a bad, bad combination for the President’s party.

Biden had a big agenda and small margins in Congress. In hindsight, maybe he should have forgone a big, risky moonshot and started with a smaller agenda -- possibly still a big one -- that he knew he could pass. I keep thinking about this tweet from Matt Yglesias ("TCJA" is the Tax Cuts and Jobs Act, the 2017 Trump tax cut):

It seems like at some point during the several years between the passage of TCJA and this past month, all the Democrats in congress should have worked out broadly what kind of tax ideas they could agree on.


Maybe Biden and the Democrats shouldn't have started on this process until they'd largely worked out what could win the votes of every last member of their caucus. Instead, Biden is being beaten up in public every day. He seems to be "losing the day" every day. "Winning the day" or "winning the week" sounds like Mark Halperin-era pundit bullshit, but maybe it isn't bullshit. Maybe people come home from work and turn on the news and what they take away from it is: Biden looks weak. Biden looked weak yesterday. Biden looked weak the day before. I have problems and Biden isn't solving them. Every day I see Biden not solving them. Every day I see Biden failing.

... I do fault some of the President’s advisors for what I can only call a certain lack of urgency, a sense that you just work through the legislative process and ... well, it takes a long time and there’s nothing really you can do about that.

Democrats need to get something done -- it almost doesn't matter what. They need to reassure the public that the country is in capable hands and we'll get past this moment. Barack Obama and Bill Clinton had similar struggles early in their presidencies, but they were young and vigorous and were excellent speakers -- they seemed reassuring to at least some of the doubting public, and that gave them room to recover from setbacks. If Biden can't inspire confidence, then he's going to stay at these numbers, maybe even after things get better. (COVID is getting better and that doesn't seem to be helping Biden.) This may be where we'll be until Election Day 2024. If it is, we can stop worrying about Republicans stealing the election, because they won't have to.