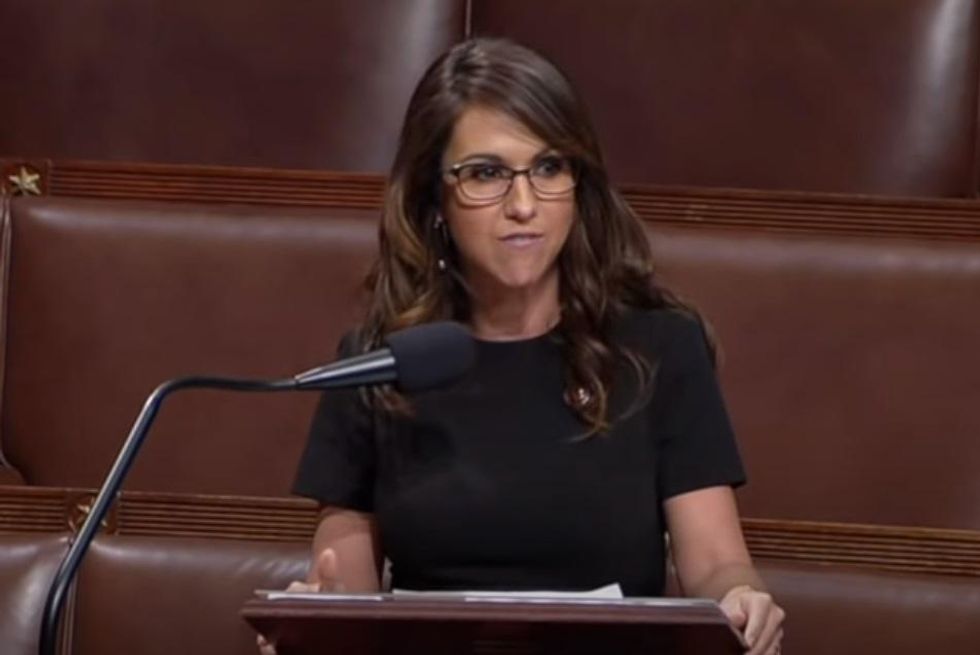 Lauren Boebert did her part to defend Rep. Paul Gosar (R-Arizona) during the House of Representatives debate on Gosar's censure yesterday, offering a vigorous set of whatabouts to prove that Gosar did nothing wrong by suggesting it would be really great to kill another member of the House. The fact that she was lying only made the distraction even better!

Without actually discussing the content of the social media video Gosar had posted, which imagined him as a fashy anime hero bravely slashing AOC to death because she was a monster, Boebert insisted Democrats had simply gone after the poor innocent snuff fantasist because they're failing so hard politically.

Then, just like a speeder asking a cop why they didn't pull over every other driver on the road, she got to the serious business of repeating some lies and half truths about Democrats, thus proving Gosar's fitness for office, or at least proving that she's at least as unfit as he is. Yes, that's very mean of us, since her rant didn't even include a single death threat.

By way of truth sandwiching Boebert's little rant, we'll just note here that her attacks on Democratic Reps. Ilhan Omar of Minnesota, Maxine Waters of California, and Eric Swalwell, also of California, are a mix of exaggerations and outright lies, as we'll detail after the video here. And damn it, The Hill, why do your videos always have to have the absolute worst titles?

Boebert started out real mature, and went downhill from there, claiming that the censure resolution was a "dumb waste of the House's time" only pursued because "Democrat policies are so pathetic and have done so poorly, that the left has nothing else to do but troll the internet looking for ways to get offended and then try to target members and strip them of their committees." Honestly, the internet has so many members of Congress threatening other members of Congress with death that it's hard to keep 'em all straight.

Then, after complaining that the censure vote was nothing but a stupid distraction, Boebert presented her own stupid distractions involving "inappropriate actions" by Democrats, in the most uncivil language, to prove she knows from norms conventions. Boebert slurred Rep. Omar as a member of the "jihad squad," because all Muslims want to do terrorism, then referred to one thing that is real, while piling on other things that are not. Ilhan, Boebert claimed, had

paid her husband – and not her brother-husband – the other one, over a million dollars in campaign funds. This member is allowed on the Foreign Affairs Committee while praising terrorists.

We will go with Mediaite's annotations here:

Before terminating a contract with her husband's consulting firm in 2020, Omar's campaign had paid the group $1.1 million in the third quarter of 2020 alone.

So a true thing then! As to her "brother-husband," again, Mediaite points out that's a weird rightwing rumor, and:

There is no evidence to support the claim, which Omar has called "absolutely false and ridiculous."

We also like the insinuation that Omar is a security risk, because don't all Muslims love terrorism? Mediaite left this out, but no, Omar hasn't praised terrorists, no matter how frequently Donald Trump loved to say so.

Rep. Omar has also not called for any colleagues to be killed.

Then it was on to Rep. Maxine Waters, who during the trial of Derek Chauvin urged a crowd to "get more confrontational" if he were not convicted, which you may also notice did not include a call for murdering anyone. Boebert falsely claimed Waters had "incited further violence in the streets" with her comments.

Finally Boebert falsely accused Rep. Eric Swalwell of all sorts of horrible things because in 2014 a woman named Christine Fang briefly worked on his campaign, and later was suspected of being a spy for China. Remember, the FBI briefed Swalwell on Fang in 2015, after which he cut off any contact with her, and the agency told him he was never suspected of any wrongdoing.

There's no evidence they ever banged, either, but then, he's never denied a banging.

Boebert managed to make it sound like high treason anyway:

My colleague and three-month presidential candidate from California who is on the Intelligence Committee slept with Fang Fang, a Chinese spy. Let me say that again, a member of Congress who received classified briefings was sleeping with the enemy! This is unacceptable!

Never mind that there's no evidence of spy-banging, just say it on the floor of the House anyway, because apparently the House doesn't have an equivalent to the Senate rule forbidding speaking "disparagingly of another Senator."

Weird. If I had done anything wrong the FBI would have raided my house. They didn't (and went as far to issue a statement saying I did nothing wrong). BUT yesterday they did raid the home of @laurenboebert's campaign manager. They're always projecting.

Well, yes, that is a rather unfortunate bit of timing, since Boebert's former campaign manager, Sheronna Bishop, did indeed have her home raided Tuesday as part of the FBI's investigation into Tina Peters, that stupid QAnon election supervisor in Colorado who's suspected in a plot to leak secure voting machine data to the internet, for America.

Then again, Swalwell certainly didn't suggest anyone be murdered, either, so this turned out to be a surprisingly upbeat story, didn't it?

Yr Wonkette is funded entirely by reader donations. If you can, please help us keep the facts straight by donating $5 or $10 monthly!