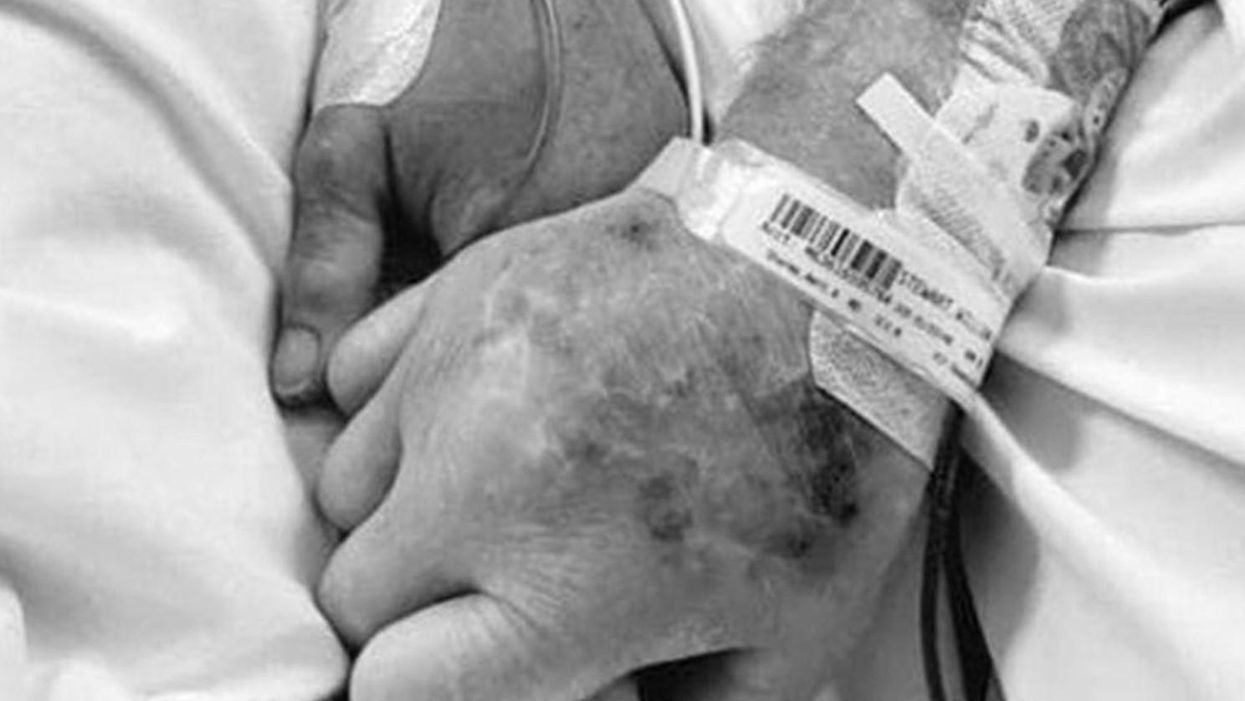 The thing about uplifting/positive/heartwarming news is that it is frequently incredibly depressing in the grand scheme of things — "firsts" for people of color and all women that have taken way the hell to long to come about, schools opening grocery stores where food insecure students can pay for food with "good deeds," Walmart employees holding canned food drives for each other, various "ingenious" ways of solving problems that should not exist in the first place, like paying for college or medical bills, etc.

Yesterday, The New York Post published a story in this general vein titled "Unvaxxed couple dies of COVID holding hands: ‘True definition of soulmates,’ which did not exactly wind up warming the cockles of anyone's heart.

William Stewart, 73, and wife Carol, 69, had been hospitalized with severe cases of COVID-19 — unmitigated by the fact that the New Hampshire couple was unvaccinated for the disease. [...]

Daughter Melissa Noke said that on the day they died, the hospital staff wheeled the elder lovebirds into the same room so they could die together.

“Placed both beds side by side, placing my mother’s hand into my father’s hand,” she told WMUR.

“As soon as they touched hands, my father took his last breath, and then my mother 10 seconds later.”T

The public traditionally loves a story, fictional or otherwise, about couples dying within moments or days of one another. It's supposed to be romantic, it's supposed to be proof of some soulmate level connection. But this, for many of those who came across it, was the least romantic/most enraging version of this story since "Barbara Allen."

It seems highly unlikely that The New York Post was entirely unaware that the public is not exactly primed right now for this particularly kind of love story. People are feeling resentful of the unvaccinated, they are feeling angry about the fact that things have continued for this long and blame those who won't get vaccinated for the fact that we can't get it under control. Those who are unvaccinated frequently don't believe COVID is all that serious or believe that the vaccine is somehow more dangerous.

So who was the audience for this even supposed to be? Whose heart was it meant to warm? I'm gonna say nobody's. I'm gonna say it was meant to piss people off when they were simply not in a mood to be receptive to a beautiful love story about true soulmates who died from COVID and left their kids without parents because they were unvaccinated. It's not the time for that.

Many of us are also not in the mood for schadenfreude over people dying either. As someone who is currently grieving a major loss, I honestly can't muster up a lot of smug "We told you so!" content with regards to death right now. I can't. I don't want to "own" anyone, I don't want to make things harder for those these people have left behind — I just don't want anyone to go through what I'm going through right now if it's at all preventable. Because it really, really sucks.

The Post was not the first to report on this story, but they were certainly the largest outlet to do so. More importantly, they also neglected to include something from the original article — the daughter's plea for others to get vaccinated before it's too late. That seems like something that might have been necessary to a story like this, were any point to be made at all.