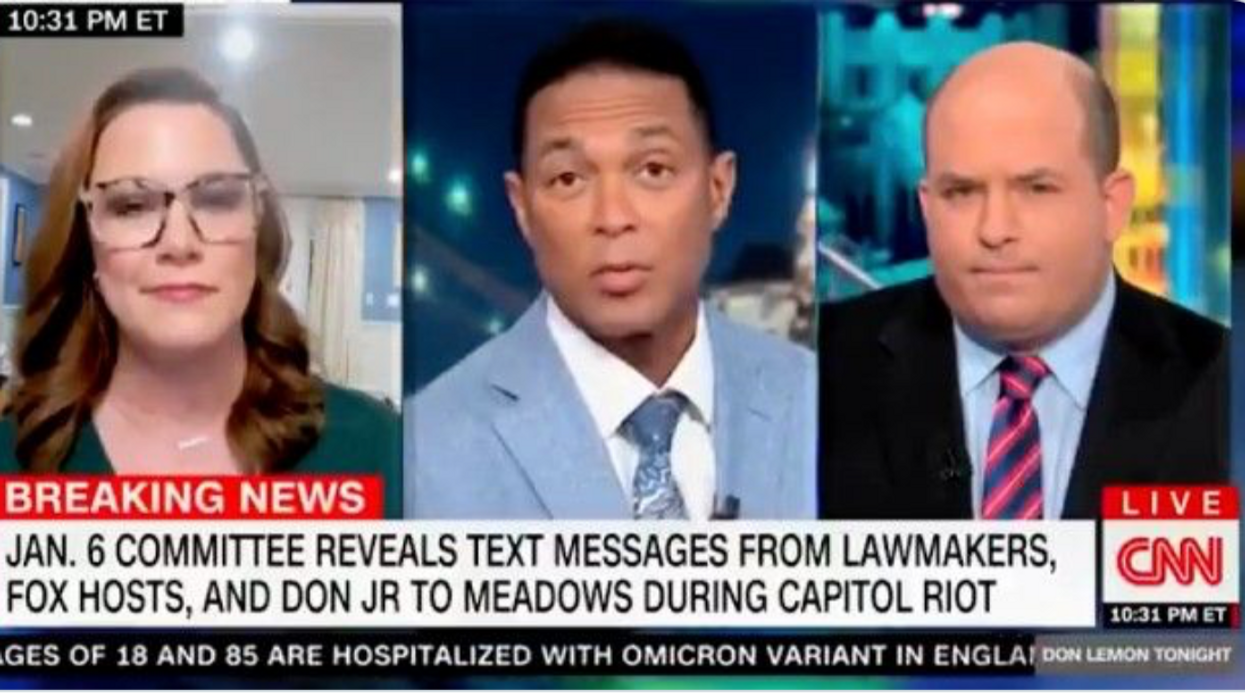 Fox News isn’t just a rightwing propaganda outlet. It’s the communications arm of the Republican Party, promoting its agenda and providing a safe space for its elected officials. When Fox News anchor Chris Wallace announced his resignation, it was suggested that Fox had lost its thin veneer of respectability. Wallace was the part of the front operation that sold viewers olive oil while the network otherwise peddled lies and distortions.

Texts from former White House chief of staff Mark Meadows revealed that Fox News hosts had contacted him directly on January 6 to request that Donald Trump call off his violent coup. These same stooges would later go on the air and suggest Black Lives Matter or Antifa had stormed the Capitol while cosplaying as Trump supporters.

This was perhaps the final straw — well, until the next one — for the mainstream media. CNN’s Don Lemon was especially pissed over this (hardly shocking) revelation. Monday night, he wondered why Fox News is even included in the White House press corps.

LEMON: Why does [White House Press Secretary] Jen Psaki even continue to call on Fox in the briefing room? They’ve been very courteous and, I should say, kind.

White House Press Secretary Jen Psaki regularly hands Fox News’s Peter Doocy his own scraggly ass. She never even raises her voice. You’ve gotta love the quiet fury of Jen Psaki. However, as entertaining as that is, there’s no benefit in providing Doocy’s trolling a platform.

[If] your network is promoting B.S. and lies about what is actually happen in the country and helping to inspire and incite an insurrection, why should they even be able to take part in a legitimate press briefing in legitimate journalism?

That’s a good question, and it takes us back to 2009 when Barack Obama’s administration considered lowering the boom on Fox News. White House communications director Anita Dunn said: “We’re going to treat them the way we would treat an opponent ... As they are undertaking a war against Barack Obama and the White House, we don’t need to pretend that this is the way that legitimate news organizations behave.”

Fox News’s relentless attacks on Obama weren’t investigative journalism. The network hammered him like it worked for the GOP (though as David Frum noted, Republicans would later learn the reverse was true). Fox News was anti-Obama and anti-Democratic advocacy posing as a Right-leaning version of CNN. It was dangerous to enable this scam, but actual journalists repeatedly defended Fox, even going so far as to suggest Obama was too sensitive and couldn’t handle criticism. Of course, questioning Obama’s loyalty to the nation and spreading lies about his heritage and religion aren’t policy critiques.

Attacking the news media is a time-honored White House tactic but to an unusual degree, the Obama administration has narrowed its sights to one specific organization, the Fox News Channel, calling it, in essence, part of the political opposition.

Stelter observed that Fox News was “the favorite network of the Bush administration” and was "now the least favored one of the Obama administration,” but he didn’t seem to realize why that was the case. Obviously, George W. Bush would appreciate a network that was so in the tank for his administration that Stephen Colbert would regularly satirize the love affair: “George Bush, great president or the greatest president.”

I think it was up to CNN, ABC, and other legitimate news outlets to draw a line in the sand and make clear that Fox News was not one of them. Just last year, when Democratic presidential candidate Elizabeth Warren called Fox News a “hate-for-profit racket” and said she wouldn’t appear on the network, Stelter gave her decision the “both sides” treatment.

He said: "Fox is unique in the fragmented media universe – it has a big, loyal audience but a divisive brand that many Democrats despise.”

This was never simply a Democratic problem. Fox News was a blight on the industry. In fairness, Tapper would later see the light: In 2017, after Fox News grossly lied about a statement he’d made, Tapper tweeted that the network was following "the slime-coated path of Daily Caller and Info Wars.”

Fox News, however, predates both the Daily Caller and Info Wars and arguably blazed the path for rightwing distortions and smears. Perhaps if other news organizations had appreciated Obama’s position in 2009, Fox News wouldn’t have radicalized millions unchallenged.