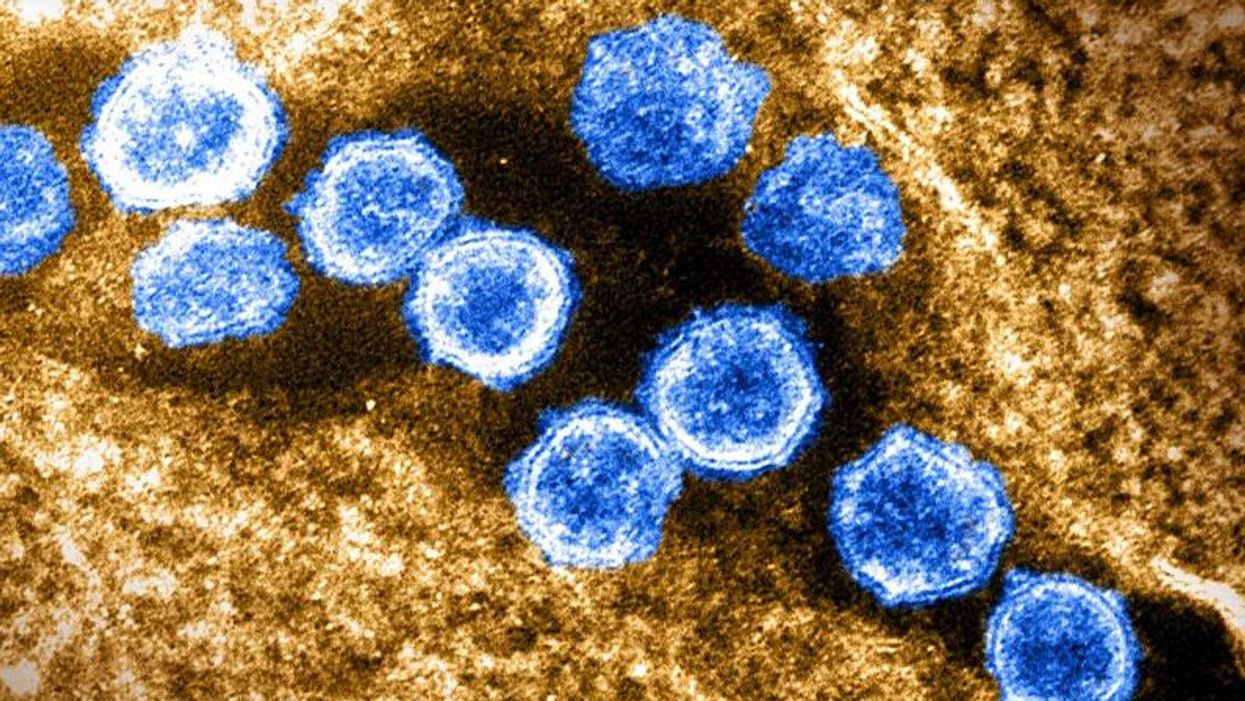 Time for another update on the viral sensation that's infecting the nation, the Omicron variant, which is topping the charts. Like, if this chart were sales of your band's new record, you'd love to see it, but not if you're a public health official in Washington DC: 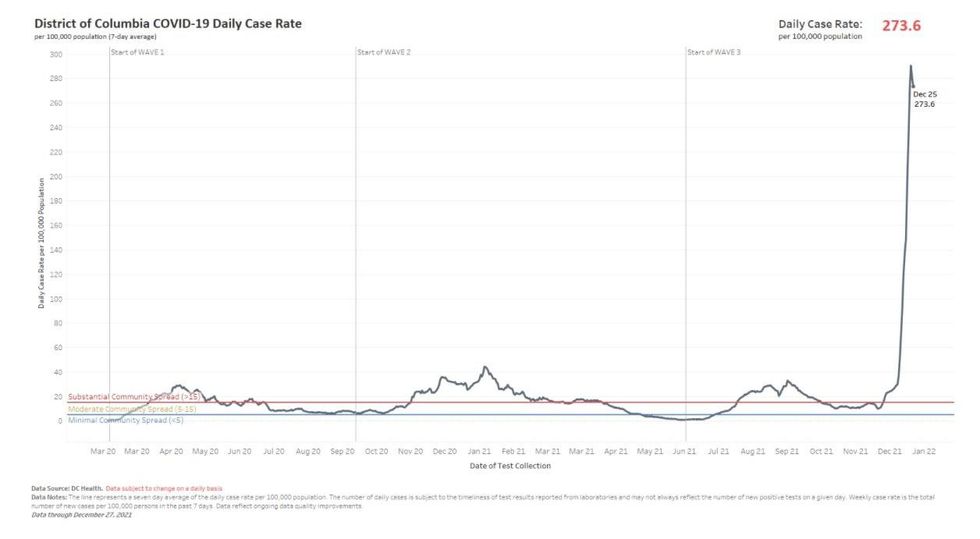 It should at least be of some comfort that while a chart of the hospitalization numbers for people who've been vaccinated and boosted also would show an increase, the curve on that one is more like the release of a new Loudon Wainwright III album than one by Taylor Swift.

The US set another new record for daily infections, with the seven-day average of new cases reaching 267,000 Tuesday, according to the New York Times. That's higher than the previous record set on January 11, 2021. Hospitalizations are lower than at the peak of last winter, but quite awful enough, with 71,000 a day. Deaths are climbing too, with an averaged of 1,243 daily, but that's also far below the January 26, 2021, record of 3,342. Let's work on not outdoing our previous achievements, please. [NYT]

Also, some improving numbers: The CDC estimates that more than 67 million Americans have gotten booster shots, with the highest proportion of boosters getting to the folks who are likely to be at greater risk:

This is encouraging, or else pretty weak. [CNN]

Also too, the CDC yesterday revised downward its estimate from last week that the Omicron variant made up 73 percent of all new cases in the US, saying that the actual percentage of Omicron cases for the week ending December 18 was much, much lower, 22.5 percent. The Omicron percentage for last week, ending on Christmas, was 58 percent, so that means we still have plenty of Delta cases filling up the hospitals. [CNN]

Omicron Not More Dangerous In Kids; They're Just Not As Vaccinated As Adults

A hopeful note from the New York Times:

Even though the Omicron variant has produced a worrisome increase in hospitalizations among children in the United States, experts said that a combination of factors, including low vaccination rates, was the most likely explanation.

Doctors and researchers said they were not seeing evidence that Omicron was more threatening to children. Instead, much of the rise in pediatric admissions results from the sheer number of children who are becoming infected with both Delta and the more contagious Omicron variant, experts said, as well as low vaccination rates among children over 5.

“I think the important story to tell here is that severity is way down and the risk for significant severe disease seems to be lower,” said Dr. David Rubin, a researcher at Children’s Hospital of Philadelphia.

As with adults, the data so far seem to indicate that Omicron causes less severe illness than Delta does, for both children and adults. But since Omicron is even more infectious than the already highly infectious Delta variant, the rise in new cases is bad news for hospitals, which can still be overwhelmed by large case loads. [NYT]

Hospitals: It's Getting Bad Again

An unvaccinated Army veteran died in Phoenix on Christmas Eve because hospitals in the area weren't able to get him the emergency medical treatment he needed. Brian Yazzie was just 35 years old, but he was on a ventilator and had been approved to get treatment with a machine that would oxygenate his blood externally. None of the machines were available in any hospital nearby, and Yazzie was too sick to be flown to a city where the machines were available. [Idaho Statesman]

Here is yet another hospital worker reminding you that if hospitals are full of people who could have avoided serious infection by getting vaccinated and boosted, that means the hospitals are too full to care for other people who need hospitals, too:

President Joe Biden yesterday rescinded his previous order restricting travel by non-US citizens from eight countries in southern Africa — South Africa, Botswana, Zimbabwe, Namibia, Lesotho, Eswatini, Mozambique, and Malawi. Biden said in a proclamation ending the restrictions that the CDC had recommended they be ended. A new regulation requiring that all travelers flying to the US test negative for COVID within a day of arriving, instead of the previous three-day limit, will remain in place.

The travel restrictions were criticized by many public health experts, including those at the World Health Organization, who said they were of little value in slowing the spread of Omicron, while punishing African nations that had quickly identified and shared data on the new variant. [CBS News]

Now that the FDA has granted emergency use authorization for the two new antiviral treatments for COVID-19, New York City health authorities are wasting no time in making the pills available at no cost to patients who need them (with a prescription, of course; this isn't a horse paste shoppe). The city health department announced that since the most widely used monoclonal antibody treatments aren't effective against Omicron, while the antiviral treatments are, the pills are now recommended instead to treat patients "with mild-to-moderate COVID-19 who are at high risk for progression to severe disease, regardless of vaccination status."

The city's notice to healthcare providers is careful to point out that Pfizer's drug Paxlovid is the preferred treatment, since it's both more effective and has fewer side effects, while Merck's Molnupiravir can be "considered for patients age 18 years and older for whom alternative FDA-authorized COVID-19 treatment options are not accessible or clinically appropriate." The notice also points out that since the drugs are both in short supply so far, they should be prioritized for treatment of patients at highest risk for severe COVID, which means they should go to "unvaccinated or incompletely vaccinated individuals and vaccinated individuals who are not expected to mount an adequate immune response" (bold in original).

Once the drugs are prescribed, they'll be delivered to the patient's home by the pharmacy that the city is contracting with, at no charge. Right now, it's just one pharmacy delivery service, but as the drugs become more available, the number of pharmacies should increase. [NYC Department of Health and Mental Hygiene]

A federal court yesterday rejected a lawsuit filed by Oklahoma Gov. Kevin Stitt, who had asked that the Pentagon's order for all service members to be vaccinated against the coronavirus be suspended for Oklahoma National Guard members, for freedom. Instead, Judge Stephen P. Friot said that yes, the military has the authority to make sure that all its members are healthy and ready to be called to national duty, even if they serve in red states where posturing against vaccine mandates is politically popular. Friot also didn't buy Stitt's claim that the Pentagon or Defense Secretary Lloyd Austin were acting unconstitutionally, because get the fuck out of here with that, all service members are already required to get nine vaccinations:

“Adding a tenth … vaccine to the list of nine that all service members are already required to take would hardly amount to ‘an enormous and transformative expansion [of the] regulatory authority’ the Secretary of Defense already possesses,” he wrote in his ruling.

The case will still go forward, but the ruling yesterday denied Stitt's attempt to have the vaccination order temporarily suspended while the case is decided. [WaPo (no paywall) / Ruling on Scribd ]

Elected officials and health experts continue to urge Americans to stay the hell home on New Year's Eve to avoid spreading the virus, because did you know it's still actually a pandemic no matter what the calendar says?

Illinois Gov. JB Pritzker put it about as succinctly as you can get: "Omicron and delta are coming to your party. [...] So you need to think twice about how many people will be gathered together, keeping social distancing if you’re at a party. And if you can’t, leave.”

Pritzker didn't follow that with any new restrictions or cancellations of New Year's Eve events, like Chicago's big fireworks show. But you can damn well watch fireworks without being in a crowd, at least. In San Francisco, however, Mayor London Breed yesterday cancelled the city's fireworks display, because, again, pandemic, yeesh. [WaPo (no paywall)]

Dr. Anthony Fauci also recommended that people avoid New Year's Eve gatherings if they're not sure of others' vaccination status, telling CNN, "There will be other years to do that, but not this year," yes, even if you really are bored at home. Read a book, you.

Dr. Anthony Fauci says he recommends that people "stay away" from large New Year\u2019s Eve gatherings where they don\u2019t know the vaccination status of guests.\n\n"There will be other years to do that, but not this year," he says.\nhttps://cnn.it/3pviwmP\u00a0pic.twitter.com/5eaEpVfWhd
— New Day (@New Day) 1640613078

Yr Wonkette loves you and is supported entirely by reader donations. If you can, please help us do this thing we do with a monthly $5 or $10 donation!