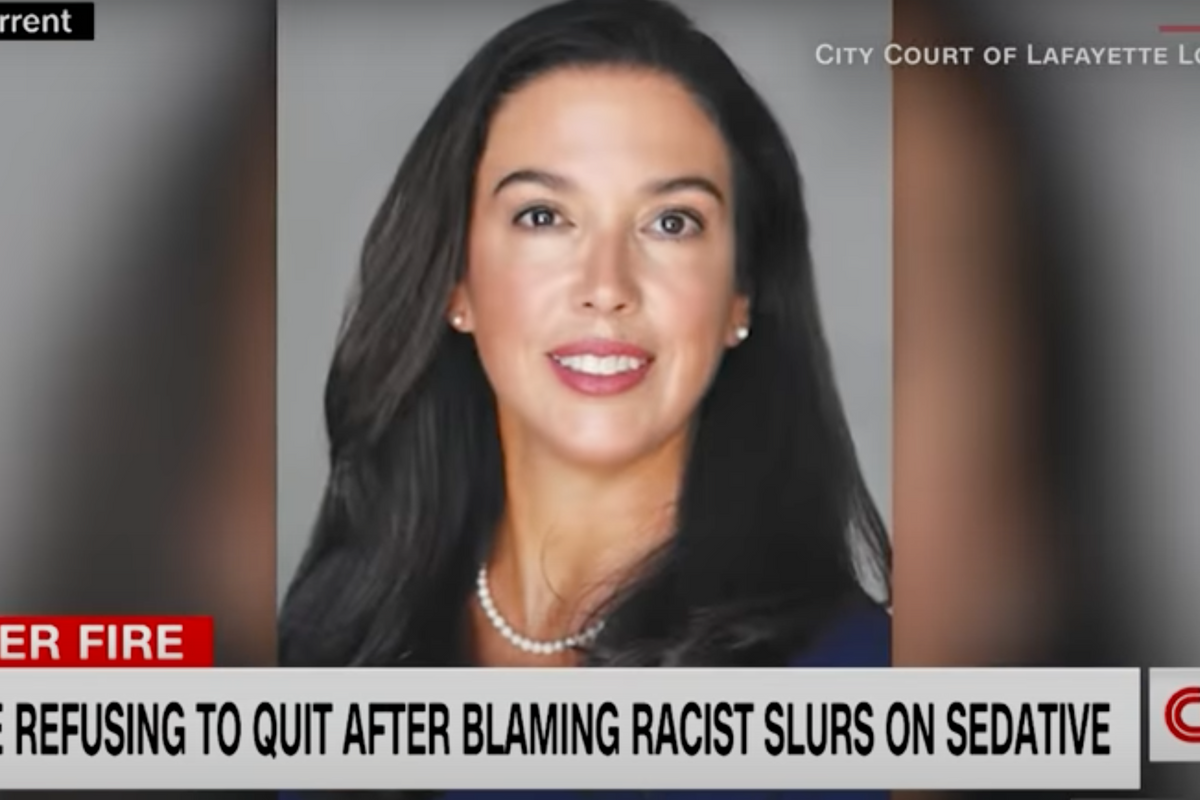 Sit down a spell. We need to discuss Michelle M. Odinet, who was until last week a circuit court judge in Lafayette, Louisiana. She was disqualified by the state Supreme Court on Friday after a video emerged that showed her shouting racial epithets while watching surveillance footage of an attempted burglary at her home. According to the Daily Beast, she seemed to enjoy the show, so her racist heckling was apparently racist heckling of joy.

In the video circulating online, a male voice can be heard saying, "And Mom's yelling n***er, n***er." Then after what appears to be some jovial banter, a female voice is heard saying, "We have a n ***er, It's a n***er, like a roach," while laughing.

The group continues talking back and forth, at one point laughing at someone in the surveillance video tripping and someone else losing their wallet.

Racism aside, "America’s Funniest Home Videos" conclusively proved someone tripping is comedy gold. Misplacing a wallet is more subtle humor, something you’d expect from "Curb Your Enthusiasm.” But judge for yourself (ha!) if you have a strong stomach:

This is DISGUSTING! Judge Michelle Odinet is captured on video using racial slurs while reviewing home security footage. People's lives are in HER HANDS on a daily basis. This level of hate & racial bias should not be in our courtrooms! She needs to RESIGN!pic.twitter.com/TVny8kcaUZ
— Ben Crump (@Ben Crump) 1639538580

Then a male voice is heard saying, "That's my phone where it fell out."

"The dude had a phone on him," a female voice chimes in. "You should have taken his phone and stolen from him, that f**king a**hole."

"Go and get the gun," says another voice. "It's important, very important," says a male voice as the video continues.

If Odinet and I were friends, which we’re not because she’s racist, I might’ve advised her to pull a Dolezal and claim she was Black herself but passing like a Nella Larsen character. Then she could invoke her n-word privileges. It’s a stretch but it’s better than her actual statement, which is just pathetic:

My children and I were the victim of an armed burglary at our home. The police were called, and the assailant was arrested. The incident shook me to my core and my mental state was fragile. I was a wreck and am still unable to sleep. I was given a sedative at the time of the video. I have zero recollection of the video and the disturbing language used during it.

Yes, Odinet was so traumatized, she had to take a fast-acting racist sedative but instead of chilling with Netflix, she watched security footage of the break-in. This is an unconventional psychological treatment: “Hey, why don’t we view this video of your tragic incident and you could try out some MST3K riffs. That’s how you’ll overcome it.”

Odinet insisted that “anyone who knows me and my husband knows this is contrary to the way we live our lives.” That tracks only if everyone in her family took the racist sedative, like it was a pot brownie. Odinet said she was "deeply sorry" and asks for "your forgiveness and understanding," blah, blah, blah, go away racist. Girl, we can HEAR YOU.

Her son, Elijah, who’s allegedly the male voice on the tape, was kicked off the Louisiana State University track and field team. That’s a damn shame.

Seemingly everyone in Louisiana who’s not heavily sedated has asked for Odinet’s resignation. This includes Governor John Bel Edwards, the local NAACP, and the Louisiana Legislative Black Caucus. If Odinet suffers from sudden black-out racism, she shouldn’t serve as judge any longer. That condition is both unpredictable and imaginary.

While Odinet takes an unpaid leave of absence that’s likely to become permanent, her replacement is Judge Vanessa Harris, a retired St. Landry Parish assistant district attorney and Opelousas court judge. She is the city’s first Black judge and has no record of losing consciousness and calling white people “roaches."

Meanwhile, New Orleans District Attorney Jason Williams has ordered a review of all cases Odinet prosecuted, which go back to the 1990s. The popular conservative dodge is that while an individual might be racist, especially after a sedative, the criminal justice system is fair and balanced. However, systems, like Mitt Romney’s corporations, are people. I’m sure the system will act on this specific individual without taking a closer examination of itself.