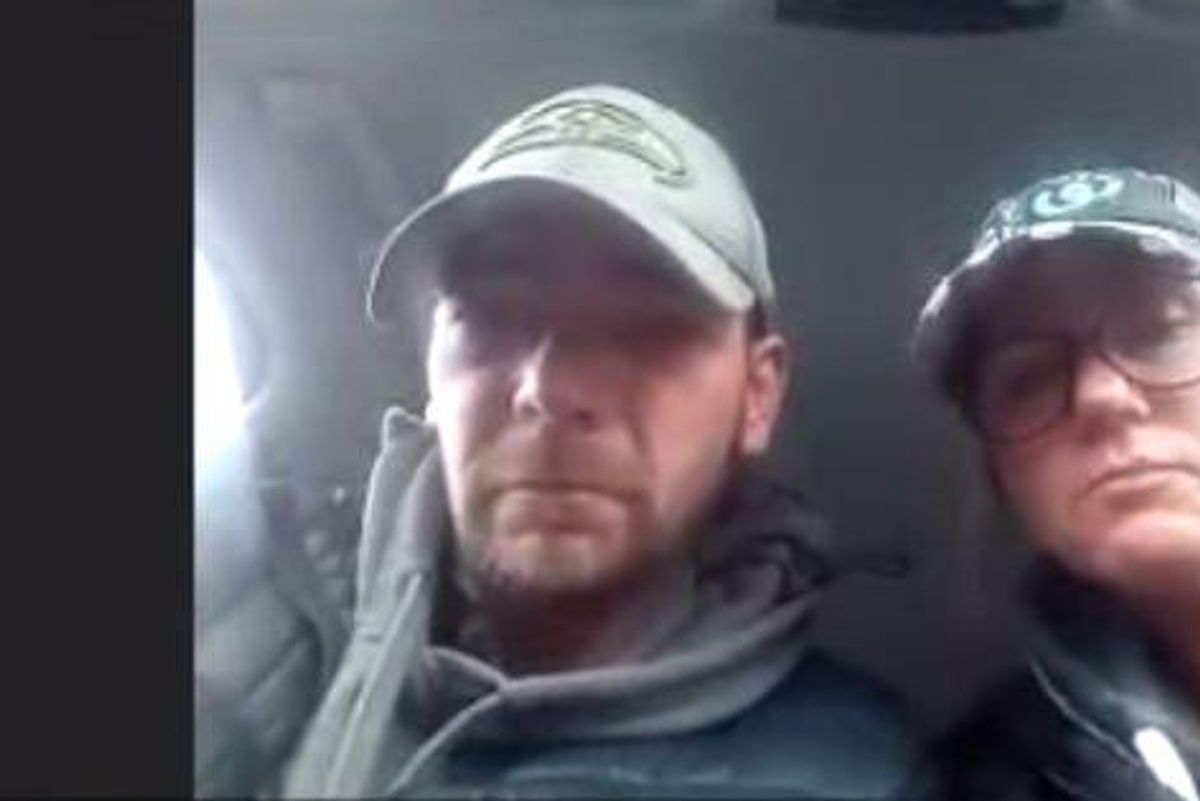 Jennifer and James Crumbley, parents of Oxford school shooter Ethan Crumbley, have each been charged with four counts of involuntary manslaughter, prosecutor Karen McDonald announced in a press conference on Friday morning.

In addition to buying their child a gun, taking him to a shooting range and keeping that gun unlocked, it appears the Crumbleys aggressively ignored all possible warning signs that their son might do something like this — warnings they had received up to and including that very day. When a concerned teacher called them about how their son was searching for ammunition in class, Jennifer Crumbley responded by telling Ethan to be better about not getting caught and assured him he wasn't in trouble. When — that morning — the school called them in to discuss their son's horrific and violent drawings, they insisted he not be sent home from school. Hours later, he killed four kids and traumatized God knows how many others.

Ethan Crumbley was apparently drawing pictures of guns and people with bullet wounds hours before he opened fire in school. Crumbley's parents were also notified about this and didn't seem particularly worried about it.pic.twitter.com/S53We7yn7W
— Aaron Rupar (@Aaron Rupar) 1638552301

All of this happened within four days, via CNN:

On or about Nov. 26: Ethan Crumbley posted photos of a semi-automatic gun on social media with a caption: “Just got my new beauty today. SIG SAUER 9mm.”

On or about Nov. 27: Jennifer Crumbley, Ethan Crumbley's mother, made a social media post that read, “mom and son day testing out his new Christmas present.”

Nov. 29: A teacher at Oxford High School observed Ethan searching for ammunition on his phone and reported that information to school officials. His parents did not reply when the school attempted to contact them. Later, Jennifer Crumbley exchanged texts with Ethan stating, “LOL I’m not mad at you. You have to learn not to get caught.”

Nov. 30: On the morning of the shooting, Ethan’s teacher came across a note that “alarmed her to the point that she took a picture of it on her cell phone.” The note contained “a drawing of a semiautomatic handgun pointing at the words ‘the thoughts won’t stop. help me.’" Also included in the note was a drawing of a bullet with “blood everywhere” written above it. Between the gun and the bullet is a drawing of a person who appears to have been shot twice and bleeding with a laughing emoji under it. The note also has “my life is useless” and “the world is dead” scrawled on it.

The parents were “immediately summoned to the school." A school counselor removed Ethan from class with his backpack and obtained the note, but the drawings of the gun, bloody figure and writings were all “altered.” At the meeting with school officials, his parents were shown the drawing and were told they had to submit their son to counseling within 48 hours. His parents did not ask the whereabouts of the gun and did not to inspect his backpack for the gun which he had with him, according to McDonald. His parents “resisted” the idea of taking Ethan out of school and left without him.

While it seems unusual to hold parents responsible for a school shooting, there is a very clear case to be made that the Crumbleys acted with an egregiously reckless disregard of the children their son hurt and in fact facilitated his ability to hurt others. They were the ones who bought him a gun he was legally too young to own and use without adult supervision. They were the only ones who had the full picture of what was going on with their son and what he was capable of and they didn't bother doing anything. The school should have sent him home immediately regardless of what they said — that's a "universal position" the prosecutor agreed — but the school didn't know he had access to a gun. Jennifer Crumbley literally texted "Ethan, don't do it" to her son when she heard there was an active shooter and James Crumbley called the police saying that his son had taken his gun. Most parents in that situation would be scared that their child could have been a victim, but they knew right off that their kid was the shooter. And they didn't want to take him out of school or get him psychological help.

Michigan does not have any safe storage laws or child access prevention laws — meaning that, technically, parents can leave loaded guns out anywhere they like. However, it's not entirely unprecedented for parents there to be charged with manslaughter in these scenarios. As Shannon Watts of Moms Demand Gun Sense noted in a tweet, "in 2000, a Flint-area man pleaded no contest to involuntary manslaughter and was sentenced to two years in prison after a 6-year-old boy who was living with him found a gun in a shoebox and killed a classmate at school."

During the press conference, prosecutor Karen McDonald suggested that perhaps Michigan might want to look into safe storage laws, so this kind of thing doesn't happen again. The fact that we can't even have reasonable gun regulations like that — one the NRA called for and then fought when Colorado tried to take them up on it — is a very big part of why these things keep happening, why kids are able to go and shoot up their whole school, why toddlers are accidentally killing/injuring themselves and others with guns their parents left lying around.

Much has been made of Jennifer Crumbley's nauseating letter to Donald Trump, in which she thanks him for protecting her right to bear arms (and also claims she can't be racist because she is at least part Italian, which I assure you is not a thing). She said she needed a gun, as a real estate broker, to protect herself in case someone she showed a house to had "bad intentions" — and as much as I hate guns, that is not an unreasonable fear, especially with open houses. But she raised someone who had "bad intentions" and left a gun around him, not caring about the people he might hurt. The "Second Amendment People," as Trump called them, love to claim that the only thing that can stop a bad guy with a gun is a good guy with a gun, but in this scenario, a parent who locks up their gun and doesn't buy one for their obviously disturbed child would have been a whole lot more effective.