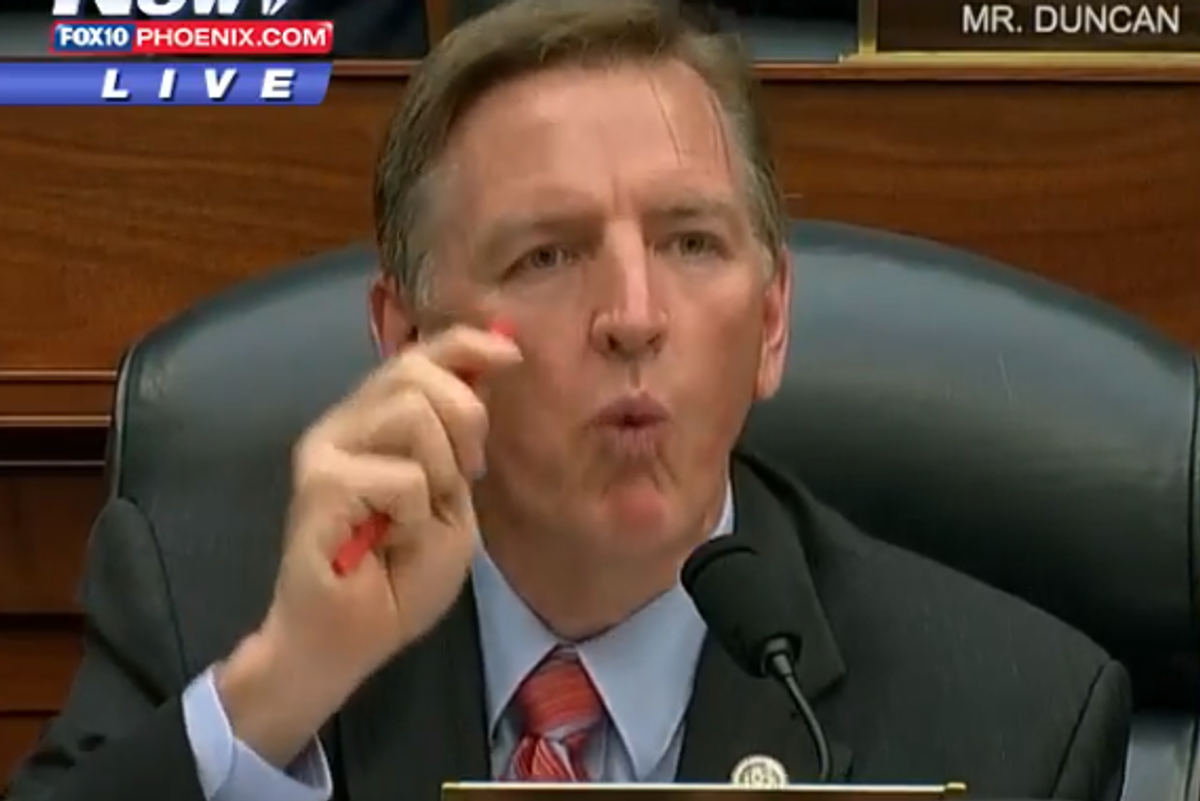 As news spread that yet another gunman had murdered many more American children in an elementary school in Uvalde, Texas, yesterday, the rumor machine started. People always want to know who did such a thing this time.

And perhaps if you are a white nationalist seditionist piece of shit, and people have been paying much closer attention to your movement ever since a white nationalist worried about the "great replacement" murdered a bunch of Americans in Buffalo, New York, literally days ago — perhaps if you are a congressman who also is worried about the "great replacement" — then you might be primed to spread some gullible bullshit, desperately hoping this week's mass shooter wasn't on your side. You know, despite how America's weekly mass shooters usually are more likely than not on your general side.

And that's how we got this from Arizona GOP Rep. Paul Gosar, in a now-deleted tweet: 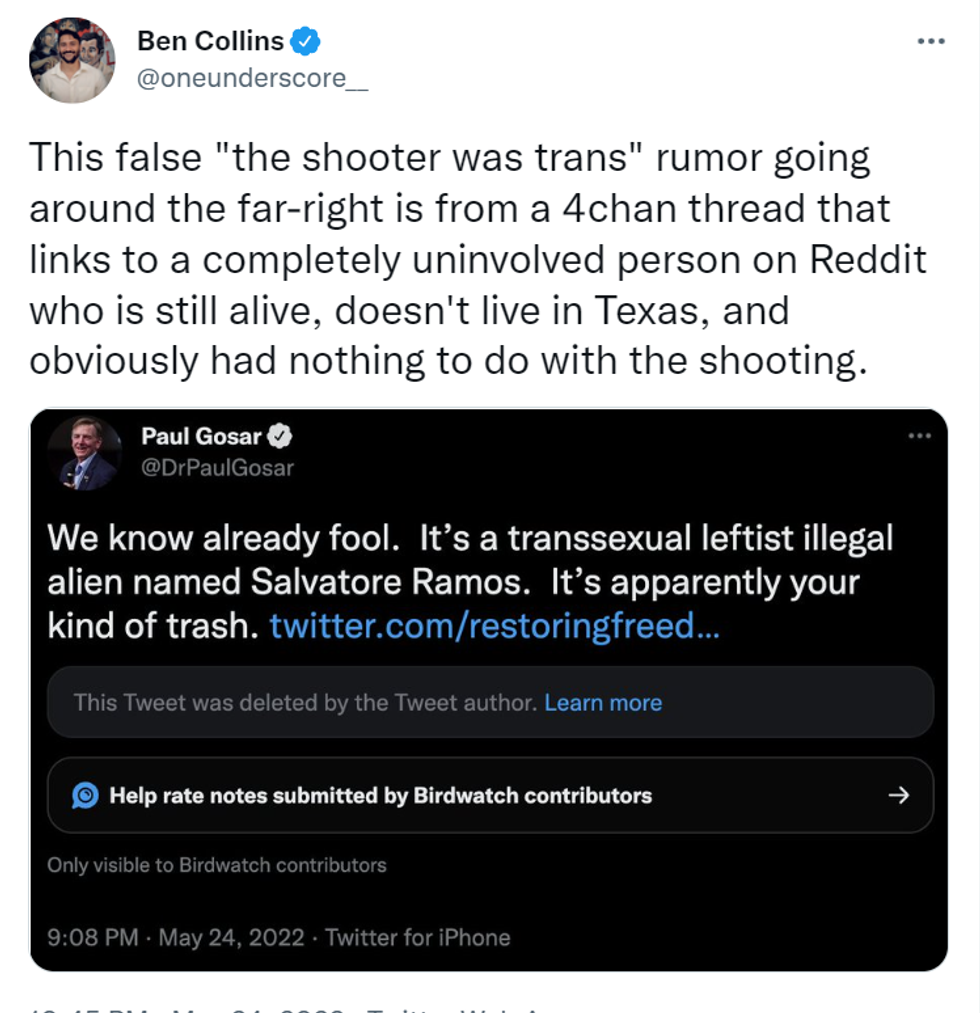 Someone on Twitter suggested the shooter was yet again from the far Right. And Gosar in his projection called that person a fool and claimed "It's a transsexual leftist illegal alien named Salvatore Ramos," adding that "It's apparently your kind of trash." Wow, the mass shooter was all the things that make Paul Gosar wet himself in fear? Impressive.

As Ben Collins explains in the above linked tweet, this rumor came from a 4chan thread that accused a random transgender person from outside of Texas of committing the mass murder, despite how we actually knew pretty quickly that the shooter was from the local community (though born in North Dakota) and attended the local high school. Gosar was just really excited that maybe this time it was a transgender illegal immigrant. That would be help Gosar spread more of his anti-immigrant white supremacist bullshit, probably!

Reporter Matt Binder has a full thread explaining what 4chan and other right-wing troll garbage did to this innocent person: 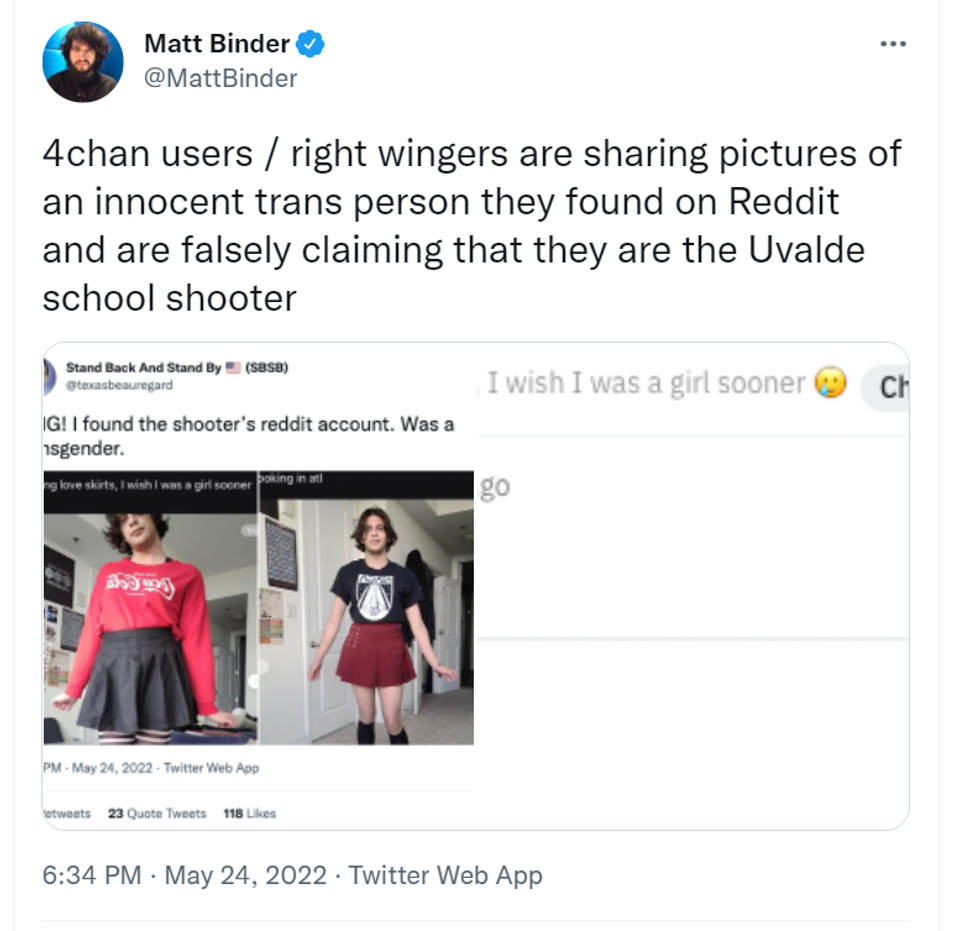 Just a random transgender person who posts on Reddit, and the vilest Americans we have decided to accuse that person of murdering 21 people, and one of America's vilest congressmen fell for it, or just decided to promote it anyway.

That trans Reddit person had to post a new pic like hello, I am not the murderer, I don't live in Texas, please stop harassing a random trans person on the internet for sport. As Binder notes in this tweet, the actual shooter was killed by the cops who responded, which is another fact we knew pretty fucking early about this mass shooting, so the fact that this Redditor was very much alive served to debunk the lies as well. 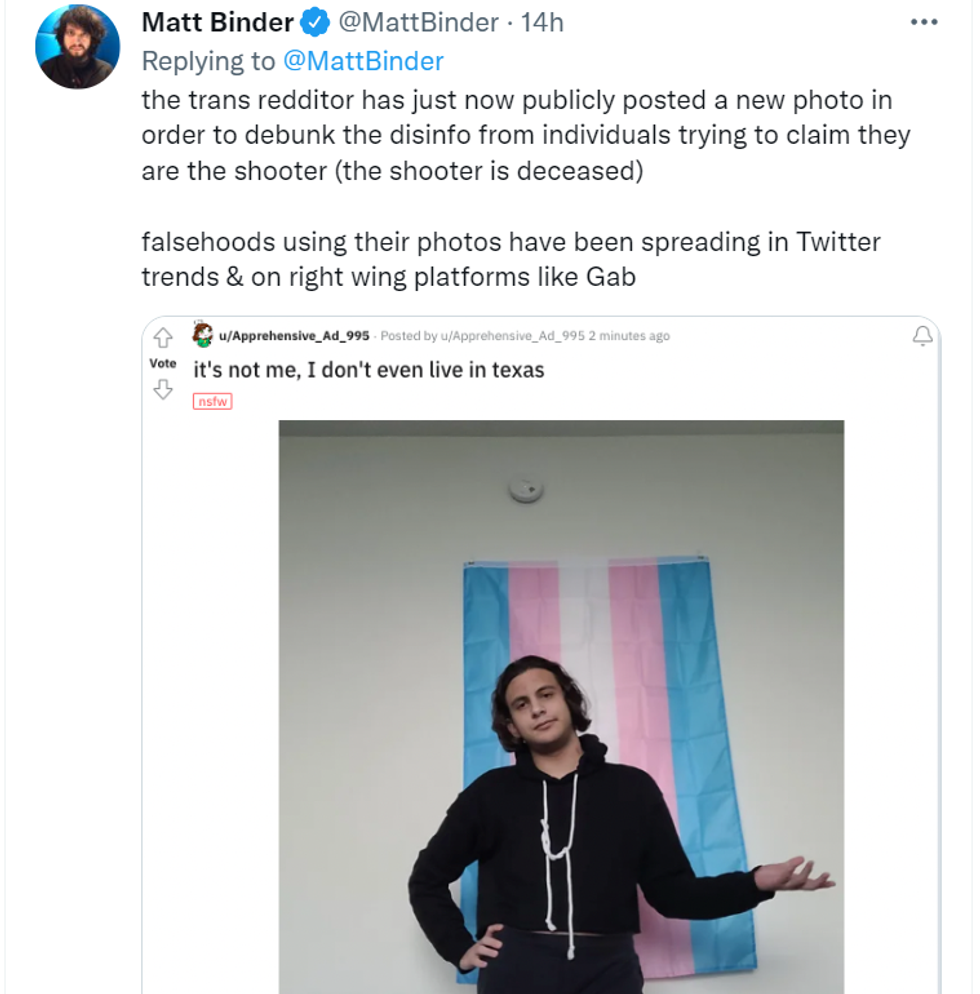 Binder followed up to say that he had talked to this poor Redditor who got victimized for no fucking reason by all these assholes, and said that "they want the disinformation debunked and the posts falsely accusing them corrected / taken down." Binder also said, seemingly in response to those on Twitter criticizing him for reposting the pics for the purpose of debunking them, that the person was aware of his tweet. We guess when your picture has been all over 4chan, Gab, and Twitter all afternoon and people have been accusing you of being a mass murderer, you're not so bothered by your pic being posted one more time by somebody who's trying to spread the message that "hey, that person is not a murderer!"

Anyway, in summary and conclusion, this is what happened, Paul Gosar is a piece of shit, and this is just the latest reason why.