Technically, this wasn’t my first post, but it was the first post in which I had the keys to the kingdom. There was no looking back and I drifted from just recipes and pets to political rants (because isn’t that why we are all here?).

I thought I’d repost it tonight, because, while Trixie is 13 weeks and I have video of her first snowstorm, work has kept me from putting together her weekly portrait, etc. I’ll try and post that mid-week.

Here’s some Trixie to hold you over – live-action. She’s a pretty laid-back pup, other than jumping around like her feet are made of springs like Tigger’s tail, I think she’s just too busy growing to be too goofy. She does spend a great deal of time sleeping on her sister and I can’t say Scout is all that amused.

Wow. Here I am behind the curtain at Balloon-Juice. [[surveys surroundings]]  And it’s just like you’d expect, full of libruls and DFHs.

Since Anne Laurie has somehow been shut out of the blog (harrumph) it has fallen to me to actually post my own recipe exchange. Enjoy. Play nice. Here are the recipes for tonight: 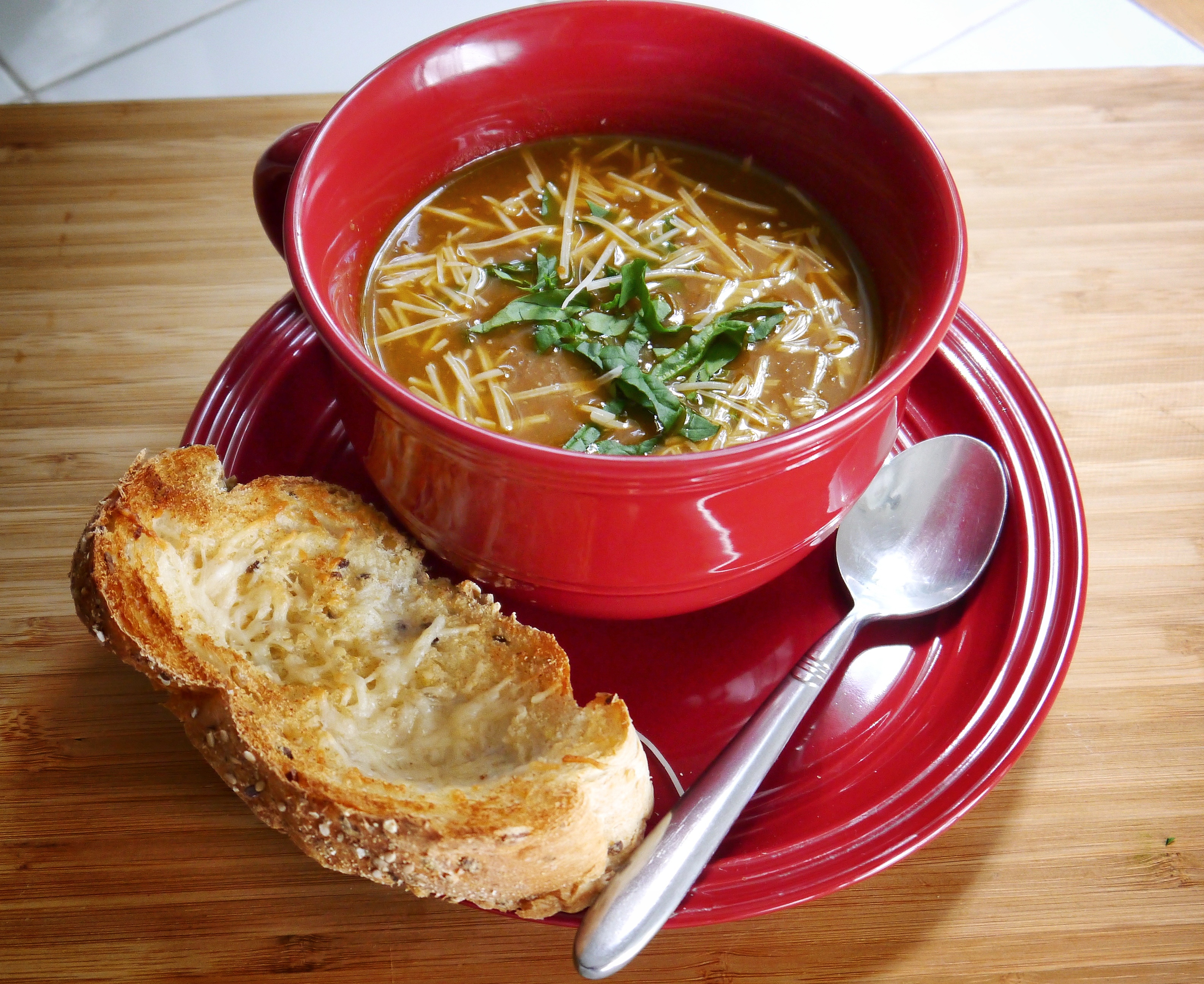 What a week we’ve had here. I retreated to the kitchen often, cooking truly reduces my stress and helps me refocus. And since everyone needs to eat, I have a perfect excuse to retreat and regroup.

Cool weather blew in today, signalling the start of soup season, a great time of year. I have quite a few soup recipes and I began the season with one of my favorites, Tomato-Spinach, pictured above and recipe here.

Next up, Pumpkin Bars, because I needed something to share with friends and this recipe makes a lot. Click here for recipe and photos.

JeffreyW went to the Farmer’s Market and made Refrigerator Pickles, there are plenty of great photos and the pickle recipe here. He went on to use the beans he purchased to make Three Bean Salad, here.

And finally, for the pet lovers, some Bixby pictures and a bit of an update.

It’s the last official weekend of summer, how will you usher it out? What’s on your plate for the weekend? We are going to head up to the mountains to take in some color, which is predicted to be a short show this year. 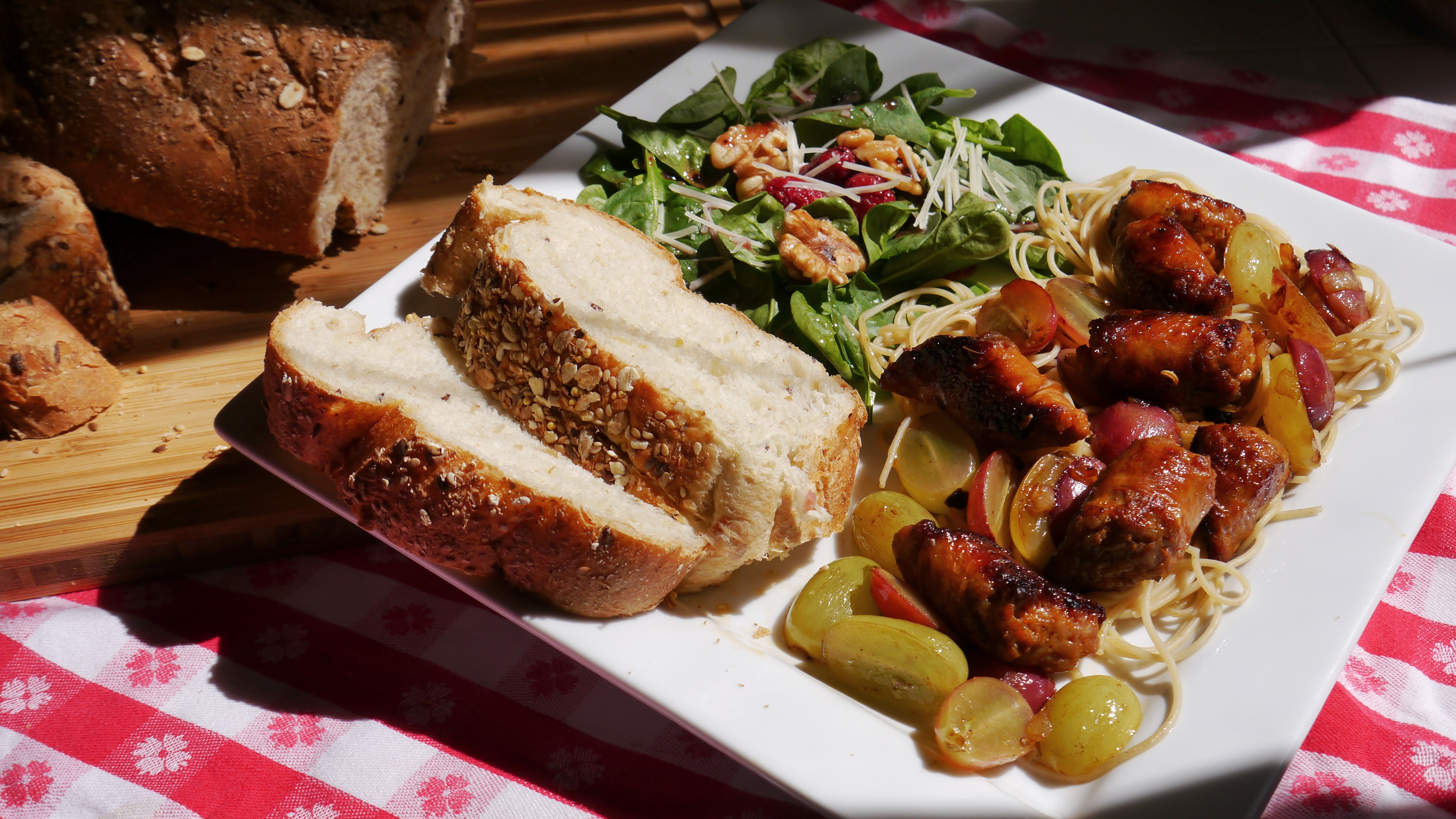 For tonight’s featured recipe, I decided to experiment with flavors I would have never thought of on my own. Facebook and blog friend Michael F, shared a recipe on Facebook from Italy, in Italian no less, and the photo intrigued me. I let google translate the recipe (which was a hoot) and went about putting my touches into it.

It was so unusual, my most reliable recipe testers politely declined my dinner invite. Totally understandable. But I will tell you I was pleasantly surprised how well this turned out. If you like pork and apples, this has a similar flavor palate. It was also quick and easy to prepare. I’m glad I decided to experiment.

All right, if you’re up for something new and different, here you go, tonight’s featured recipe.

Slice sausage links into four pieces each, add to skillet and fry on medium high for about 10 minutes. Add onion and fennel seeds, cook another 5 minutes, stirring frequently, until onions are translucent. Add grapes, stir until well mixed, cover and let simmer for an additional 10-15 minutes while pasta cooks.

You can toss with the sausage mixture, or serve separately. Serve with Parmesan.

The pasta was my addition. When I asked Michael what would be a good side, he suggested eggplant or roasted potatoes. Roasted zucchini spears would probably work well, too.

Here is the original recipe.

That’s if for this week. Hope I didn’t screw anything up.  Have a great weekend. – TaMara

Back to real time, this is an open thread…