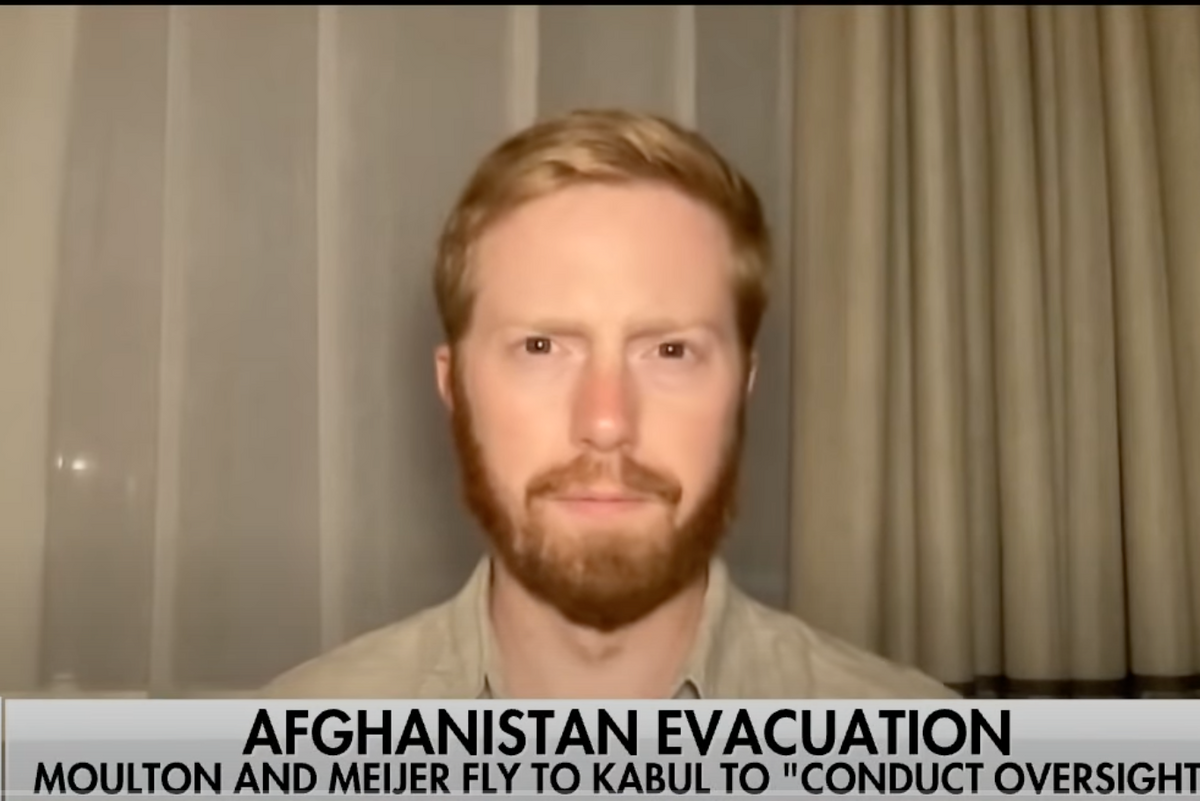 Only 74 out of 213 House Republicans voted to certify President Joe Biden’s Electoral College victory on January 6, and just a meager 10 Republicans later voted to impeach Donald Trump for inciting an attack on Congress itself. They aren’t heroes, but they do stand out amongst the moral rubble of the modern Republican Party.

Tim Alberta’s profile of GOP Rep. Peter Meijer reads like the film treatment about a wide-eyed naif who realizes too late that he’s working for the mob. Meijer is 33 years old and somehow thinks Republicans are worth a damn. He was a year old when Ronald Reagan left office, so maybe that helps. He was 10 when the GOP impeached Bill Clinton for fellatio-related felonies. He was barely in high school when George W. Bush’s administration lied its way into the Iraq War. There was corruption all around him, which should've prepared him for Trump.

Meijer considered Trumpism a distraction from America’s problems rather than the actual cause. He planned to support Trump whenever convenient and ignore him whenever possible. This was not a brave or moral stance in 2020. Replacing former Republican Justin Amash, who’d voted for Trump’s first annual impeachment, as a congressman from Michigan, Meijer hoped to avoid the "culture wars or the tribal showdowns,” but he couldn’t run far or fast enough.

Republican House members were under tremendous pressure to overturn the presidential election. Angry voters in their districts had fallen for the Big Lie and the fundamental contradiction that voter fraud somehow only affected the top of the ballot. Meijer claims that one longtime member confessed that he knew the election wasn’t stolen but was going to vote against certification anyway. This anonymous traitor reassured Meijer that: “This is the last thing Donald Trump will ever ask you to do.” Surrendering parts of your soul to Trump is like feeding wild animals. He’ll always keep coming back until there’s nothing left.

When they pressed him—one of the freshmen asked whether Trump was crazy enough to believe that decertification would somehow keep him in office—McCarthy replied, “The thing you have to understand about Donald Trump is that he hasn’t been in government that long. He doesn’t know how these things work.”

This pathetic defense of Trump goes back to when Paul Ryan was House speaker: Trump is just too stupid to treason. However, Trump is stupid like a fox. He wanted to overturn a democratic election and was willing to use violence to those ends. Further evidence of Trump's brand of stochastic terrorism is how after the MAGA mob stormed the Capitol, Meijer watched as other Republicans caved and abandoned their constitutional duty because they feared for their lives. It would be great if they would admit as much under oath.

On the House floor, moments before the vote, Meijer approached a member who appeared on the verge of a breakdown. He asked his new colleague if he was okay. The member responded that he was not; that no matter his belief in the legitimacy of the election, he could no longer vote to certify the results, because he feared for his family’s safety. “Remember, this wasn’t a hypothetical. You were casting that vote after seeing with your own two eyes what some of these people are capable of,” Meijer says. “If they’re willing to come after you inside the U.S. Capitol, what will they do when you’re at home with your kids?”

These are the words of a traitor and a coward. If this Republican congressman couldn’t stand up to Trump’s mob, he should’ve resigned and gone home to hide under his bed. Instead he willingly subverted a free and fair election. Fortunately, Democrats had the House majority, and while their members had even more reason to fear for their lives — especially Nancy Pelosi and Alexandria Ocasio-Cortez — they still did the right thing. They are the heroes of this story.

Meijer is one of the 10 Republicans who voted for Trump’s second annual impeachment. He might survive that vote politically if not spiritually. He wistfully imagined that the GOP would abandon Trump after January 6. This obviously didn’t happen, and now he contorts himself into a rhetorical pretzel to avoid criticizing McCarthy. Meijer presents himself as one of the good guys, and that provides a permission structure for voters to support Republican candidates who don’t foam at the mouth like Lauren Boebert. This is dangerous because we’ve already witnessed that the overwhelming majority of Republicans are either corrupt or weak. Replacing Meijer with a Democrat helps keep the gavel out of McCarthy’s hands ... or worse.