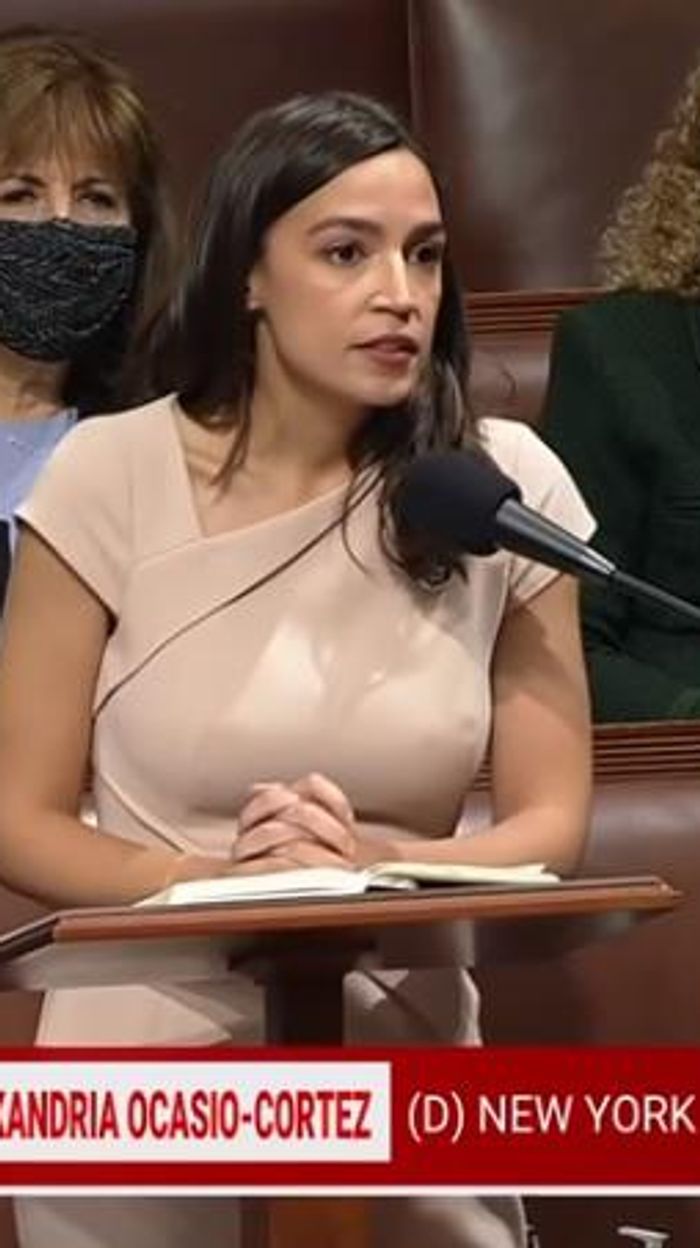 The 223 to 207 vote included all the Democrats as well as two Republicans, Reps. Liz Cheney of Wyoming and Adam Kinzinger of Illinois. The vote makes Gosar just the 24th member of the House to be formally reprimanded by censure; the House also removed him from the two committees he sits on, Oversight and Reform, and Natural Resources. Gosh, what a loss to C-SPAN viewers.

Prior to the vote, House Speaker Nancy Pelosi read the resolution calling for Gosar's censure, emphasizing that members of Congress are allegedly supposed to be better behaved than Gateway Pundit commenters or Philadelphia sports fans, arguing that when a member of Congress "uses his or her national platform to encourage violence, tragically, people listen to those words and they may act upon them." Pelosi added that what Gosar had done amounted to a threat against a coworker, and wouldn't be allowed under any reputable company's HR policy:

These threats specifically targeted a woman, a woman of color, which is, as the resolution states, a global phenomenon meant to silence women, to discourage them for seeking positions of authority and participating in public life. Again, this is about workplace harassment and violence against women.

House Minority leader Kevin McCarthy offered a vigorous defense of Gosar by not saying much of anything to defend Gosar, noting that Gosar had taken down the video anyway — he of course reposted it after the vote. And heavens no, continued McCarthy, no one supports violence! McCarthy then wept and moaned that Democrats had run mad with power and were absolutely determined to run roughshod over Republicans. For good measure, he also complained that Democrats hadn't censured Maxine Waters for having encouraged people to yell at any members of the Trump administration they might see in public, for surely interrupting a meal is the very same as a death threat. It was an impressive illustration of banging on the table when you don't have anything to say in someone's defense.

Here's the video, if you can stomach it:


McCarthy insisted the censure of Gosar was an "unprecedented" partisan attack, because Gosar's fantasy about killing a fellow member of Congress somehow didn't cross that line, and whined that Democrats were nothing but big hypocrites, expecting "rules for thee but not for me," which is a pretty special sentiment coming from the guy whose party still insists the 2020 election was stolen by rampant fraud that was everywhere but also undetectable. Oh yes, and also the guy who, in keeping with established precedent, threatened to punish any telecoms companies that complied with subpoenas from the January 6 commission.

Oh dear, did we just do a whatabout? Or did we simply point out that McCarthy doesn't have a hell of a lot of credibility when it comes to accusing anyone of abusing power?

McCarthy shed great big crocodile tears at the prospect that Democrats would now hold a veto over all Republican committee assignments, which is totally unfair, although he also warned that if Republicans take control of Congress in next year's midterms, he'd have little choice but to maybe remove Democrats from committees at will, regardless of whether they threatened any colleagues, because now it's a matter of principle: "A new standard will continue to be applied in the future."

As Washington Post columnist Aaron Blake points out, other House Republicans have made similar threats. Rep. Jim Banks (R-Indiana) suggested that maybe all members of the January 6 Select Committee should lose their committee assignments as payback for their radical abuse of power in investigating the attempted coup. Lauren Boebert (R-Colorado) called for retaliation against Democrats who held Steve Bannon in contempt of Congress simply for failing to appear, and Jim Jordan (R-Ohio) said Biden aides will surely face their day in the hot seat for something: "There are a lot of Republicans eager to hear testimony from Ron Klain and Jake Sullivan when we take back the House." Why will they be investigated? Because they have to be.

In her own speech calling for Gosar to be censured, Ocasio-Cortez reminded members of the House that "joking" about how neato it would be to kill another member is just plain unacceptable, or at least should be, as it would be in any workplace.

Ocasio-Cortez seized on McCarthy's talk of Democrats' supposedly "unprecedented" behavior, and sent it back where it belonged:

What I believe is unprecedented is for a member of House leadership of either party to be unable to condemn incitement of violence against a member of this body. It is sad. It is a sad day in which a member who leads a political party in the United States of America cannot bring themselves to say that issuing a depiction of murdering a member of Congress is wrong and instead decides to venture off into a tangent about gas prices and inflation.

In an echo of Joseph Welch's "have you left no sense of decency?" comments to another McCarthy 67 years ago, Ocasio-Cortez asked, "What is so hard? What is so hard about saying that this is wrong?" She assailed the "nihilism" of casually joking about killing political opponents, saying it "betrays a certain contempt for the meaning and importance of our work here. That what we do, so long as we claim that it is a joke, doesn't matter."

Ocasio-Cortez closed by sweeping away all of McCarthy's whatabouts with a fairly simple observation:

[When] the Republican leader rose to talk about how there are all of these double standards and lists a litany of all these different things, not once did he list an example of a member of Congress threatening the life of another. This is not about a double standard and what is unprecedented and what is tragic is the dissent of transgression in this body. [...]

So the question I pose to this body in response is: Will we live up to the promises that we make our children? That this is a place where we will defend one another regardless of belief? That our core human dignity matters? If you believe that this behavior is acceptable, go ahead, vote no. But if you believe that this behavior should not be accepted, then vote yes. It's really that simple.

In his defense, Gosar said he doesn't support violence, refused once more to apologize, and explained that the cartoon was his symbolic protest against undocumented immigration, you see, not a death threat. It's not the greatest defense, since the anime it's based on, "Attack on Titan," is about plucky Aryan folk defending their walled city from monstrous brainless giants by flying through the air and killing them with swords to the back of the neck. Not really a non-murdery context.

Incidentally, we noted the similarity between Donald Trump's WALL fetish and the cartoon in a photoshoop we did early on in the Trump years, albeit with no murder. See? Both sides! 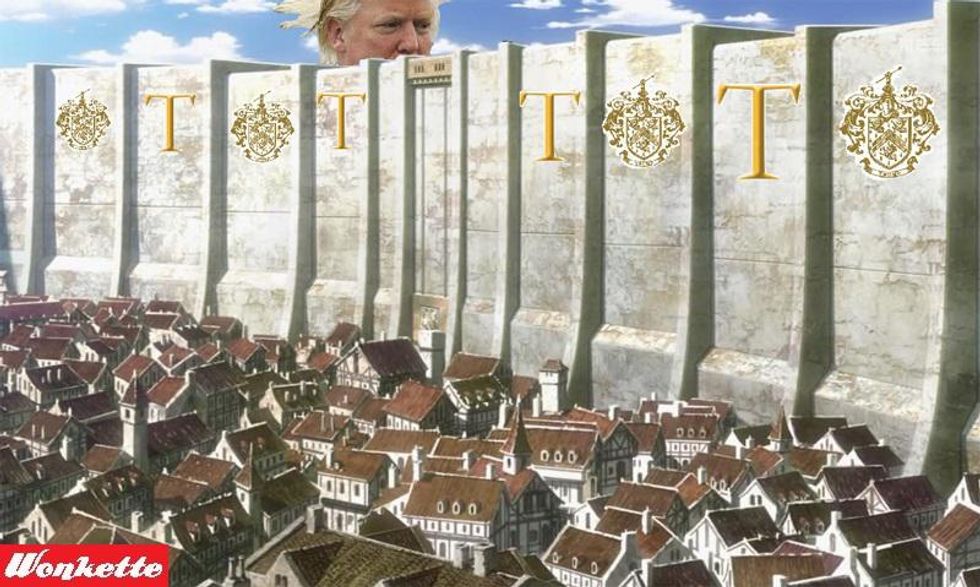 Gosar closed by comparing himself to some rapper the kids all listen to these days, saying, "If I must join Alexander Hamilton, the first person attempted to be censured by this House, so be it. It is done." And then before a bald eagle could fly through a window and perch on Gosar's shoulder, Rep. David Cicilline (D-Rhode Island), sharply replied, "Mr. Gosar, you are no Alexander Hamilton."

Then a few minutes after the censure, to prove he'd really learned his lesson, Gosar retweeted a supporter's repost of the video, and we'll all get right back to the death threats again as normal, and maybe if Democrats would just be nicer this wouldn't happen, the end.

Yr Wonkette is funded entirely by reader donations. If you can, please help us keep the internet a very civil fucking place with a monthly donation of $5 or $10.