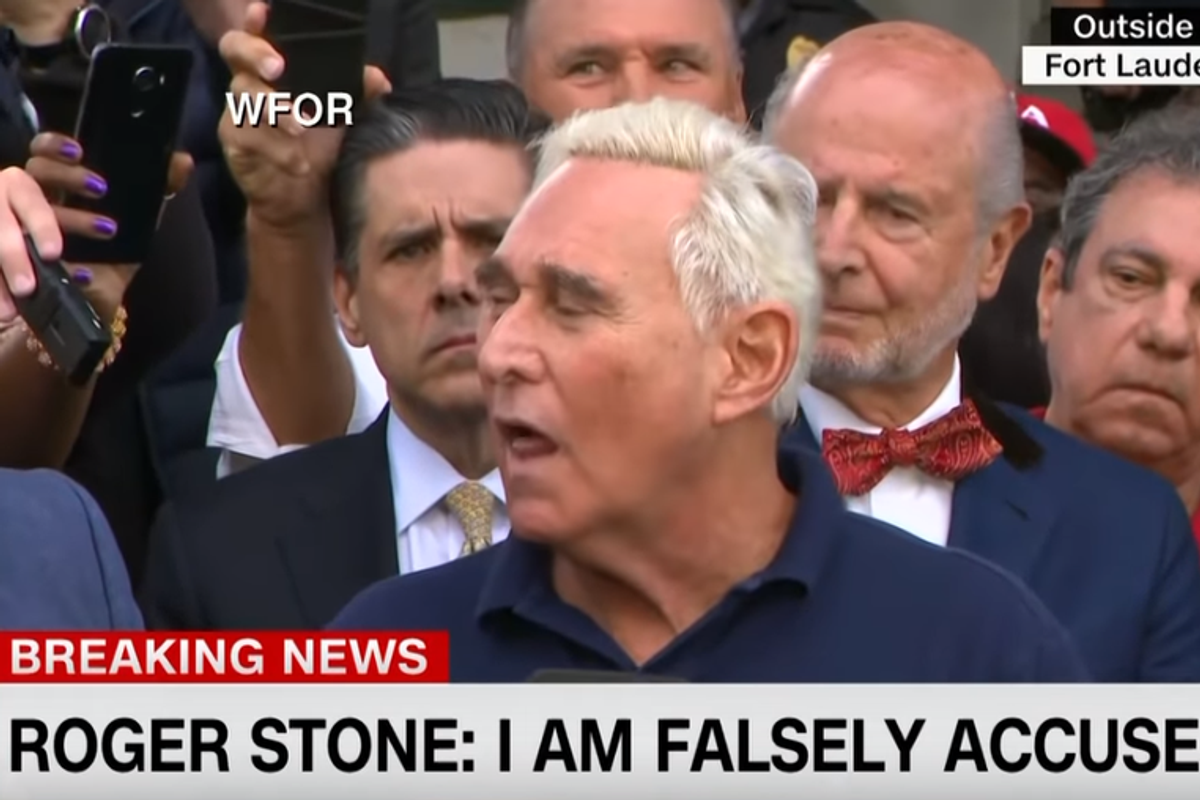 We will now take a break from important political news to discuss Roger Stone's sperm declarations.

Yeah, this is extremely normalpic.twitter.com/A8FGQmJBGK

Yes, that is Roger Stone on Gab saying that since he doesn't have a "biological heir," and "because the freedom movement needs future warriors," he is going to "freeze some of my sperm in case Laura Loomer decides to bear my child sometime in the future."

Hey there. How you doin'? Keeping up with this important story about Roger Stone and sperm? Any questions we should cover?

And yes, this is the same Laura Loomer you are thinking of, the batshit one who got permanently banned from Twitter, then signed on to a Larry Klayman lawsuit alleging Twitter was discriminating against her for being Jewish and conservative; who launched a clown run for Congress in Florida, which obviously didn't go well, but don't worry, she's gonna try again in a different district; and who is basically just a far-Right loser person whose entire skillset is being a troll and saying awful things about Muslims. When her unvaccinated self got COVID, she really wanted to get horse paste but the doctors wouldn't let her.

And then at some point later Roger Stone said:

"Here is a headline you will never see 'Laura Loomer announces her intention to carry Roger Stone's baby invitro and convert to be a Methodist."

Wait, she's not allowed to be Jewish anymore? What's Roger Stone's problem here, exactly? Was he hoping that, in the unlikely event Loomer would agree to be impregnated by his sperm-sicles, that she would also abandon her religion?

Newsweek's story gives background on what Roger Stone and Roger Stone's sperm and Laura Loomer have been doing lately, in case we all care. We saw the headlines about how Stone was yelling and stomping his feet at GOP Florida Governor Ron DeSantis, threatening to run against DeSantis as a Libertarian if DeSantis doesn't do an audit to find out how many millions of votes Donald Trump REALLY won Florida by.

And then Newsweek types this with a straight face, like it's just normal news about a person:

Meanwhile, Loomer, who has also promoted baseless claims that the 2020 presidential election was stolen from Trump, is running to represent Florida's 11th congressional district.

We're sure second time will be the charm.

Best wishes to all these people.