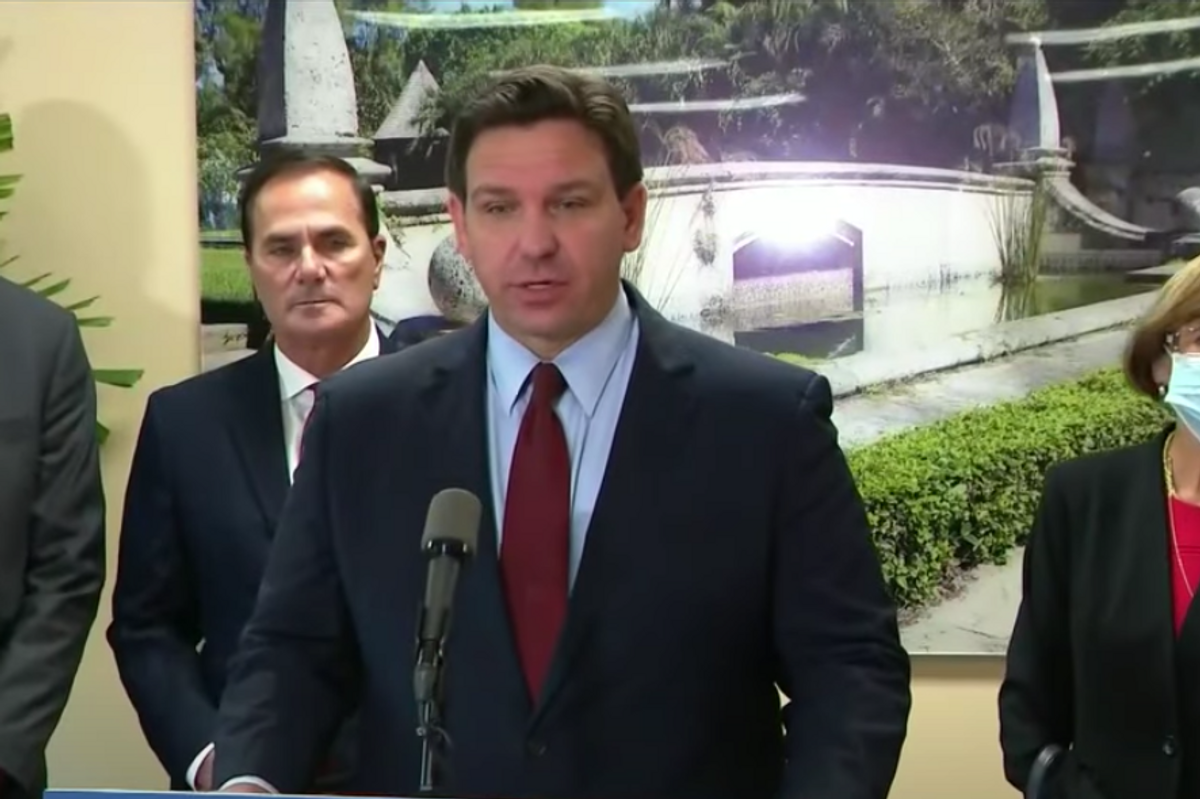 After mysteriously disappearing during Florida's largest COVID-19 spike since the pandemic, Ron DeSantis – who still won't say whether he's had a booster shot or not — has reemerged from the shadows to drop multiple bad takes about a variety of subjects, from COVID testing to January 6.

On Wednesday, the Florida governor came out of the woodwork to announce that he is planning to drop $10 million to bring manufacturing work to Florida, a right-to-work state. However, no one was paying much attention to that, given DeSantis's labored breathing, as that is frequently a side-effect of COVID-19.

Here is a second angle of Ron DeSantis struggling with breathing problems during his event today. The longer this clip goes on, the worse it gets.pic.twitter.com/J9Jr55x8Py
— MeidasTouch.com (@MeidasTouch.com) 1641416620

It's actually a little painful to listen to. While it is entirely possible that DeSantis did not have COVID during his disappearance, he should probably get that checked out anyway, because it really does not sound good. Unless he just ran a marathon we don't know about. Then again, DeSantis has never been super keen on helping other people avoid dying unnecessarily, so perhaps he extends this attitude to himself.

In a press conference on Thursday, DeSantis addressed the current COVID spike and the incredible lack of tests available in Florida, which he has decided to blame Joe Biden for — despite confirming that his administration pretty much just let a million tests expire without bothering to get them to people desperate for them.

Let me tell you — I am in Florida now (for reasons) and it is next to impossible to get a COVID test here. Not only have rapid tests been sold out at every CVS or Walgreens in our area for quite some time now, but testing sites don't have any appointments available for over a week. There were 60,000 diagnosed cases in the state yesterday alone, but given that people aren't able to get tests, it's very likely much higher than that.

It would be one thing if DeSantis and Florida Surgeon General Joseph Ladapo were saying, "Hey, we've got a major spike and a pretty serious test shortage happening right now, so unless you are feeling sick and think you probably have COVID, don't use up a test that could go to someone who likely has it." That would be fine and, in fact, quite reasonable. Instead, they've decided to go the route of claiming that there's no reason for people who aren't symptomatic to get tested, and that people should just go and live their lives without worrying about spreading the virus. That is not fine and that is not reasonable.

MORE: Florida Surgeon General Says BACK AWAY FROM THE COVID TEST

“That’s the direction that we’re moving to, as the governor said, we’re not restricting access, we’re just basically sort of unwinding the thinking that the national leadership has managed to unfortunately infuse many Americans with, and it’s this notion that if you’re healthy, you still need to go to get tested for something so that you can determine whether you’re sick, you know, think about that,” Ladapo said.

The governor said an asymptomatic “healthy” person going to get tested to figure out if they’re sick is “very low value testing.”

“At the end of the day, when you have an endemic respiratory virus, you’ve got the default that’s gotta be, you live your life. And then if you end up getting sick, then test to see what it is and then get treatment,” DeSantis said.

Rapid COVID tests only take 15 minutes, so it's not really interfering with anyone's life to take them. Some of us also find it a lot easier to live our lives not worrying that we might infect someone, because we are capable of the human feeling known as "guilt."

In that same press conference, DeSantis decried the January 6 anniversary as "Christmas" for the media, because of how we get to use that to make Republicans look bad. He was particularly outraged that "the media" spent more time on that than they did on the time Steve Scalise got shot by James Hodgkinson, a Democrat, during a congressional baseball practice in 2017. You know, because if things were really fair, "the media" would spend as much time on this one incident as they do on the many rightwing shootings, attempted shootings, and acts of terrorism combined.

He added that the Jan. 6 anniversary of the event where Trump supporters staged a deadly assault on the Capitol was like “Christmas” for news outlets in Washington and New York City. He contended that the media only spent one or two days reporting on the 2017 shooting where Republicans were targeted by a man who supported left-wing causes while practicing for an upcoming charity baseball game. Several people were shot, including Rep. Steve Scalise (R-La.), who was severely injured. The shooter, James Hodgkinson, was shot and killed by police.

“Jan. 6 allows them to create narratives that are negative about people that supported Donald Trump,” said DeSantis, who also rejected labeling the riots as an “insurrection” because no one has been charged with any crimes that fit that definition.

Damn, guess they sent out a memo.

FURTHER: The Right Is Still Deeply Confused About What They Want The January 6 Narrative To Be

Just to be clear here — absolutely no one needs to do jack shit to make Republicans "look" bad. They look bad because they do and say things that people think are bad on a regular basis. It's not an image issue, it's not an issue of interpretation, and it's not a weird plot to make otherwise normal and nice people seem bad — if it were, we'd still be hoping that one outlying incident from 2017, involving literally one person who is now dead, could be used as a cudgel to make them all look bad. But alas, we have more material than we ever asked for or needed.