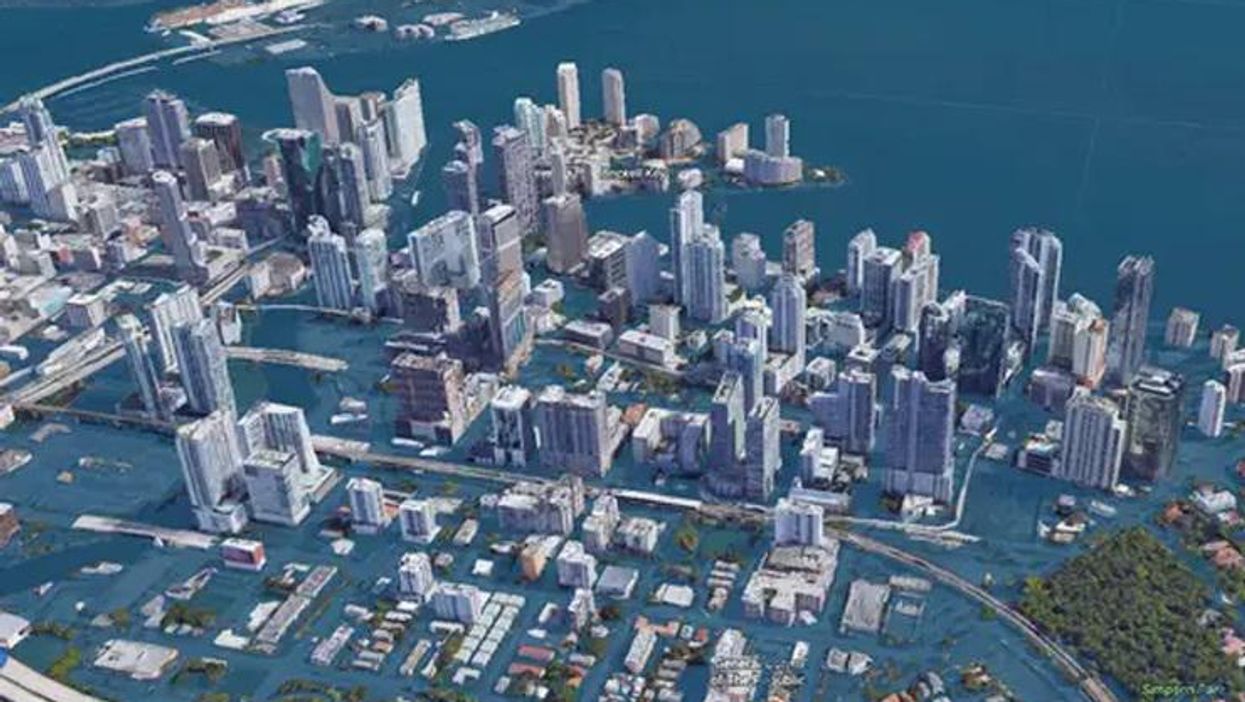 Florida Gov. Ron DeSantis held a press conference Tuesday to trumpet a great big spending package that'll protect low-lying parts of the state from rising sea levels and flooding. As the Florida Phoenix reports, depending on which part of the announcement you listened to, it's either "$270 million for 76 projects (or $276 million for 70 projects)," to be paid out in grants to local communities over the next three years. (We checked, and various sources' numbers are all over the map.) The local governments and water districts getting the grants would generally have to provide matching funds as well, so they can build seawalls and improve drainage and otherwise deal with higher water.

Not that DeSantis would say why sea levels might possibly be rising in his state, which has a lot of coastline and whose highest point is just 345 feet above sea level, making it the lowest high point in the USA. (This is the case for many of Florida's metaphorical high points, too.) Like other Republicans, he knows damn well that his state is at risk from the climate emergency, but damned if he'll say it's real because then he might become a pariah.

At no point during the press conference did DeSantis or either of his top two environmental officers say the words "climate change" or "global warming," continuing a long-ridiculed Florida Republican tradition. When a reporter asked DeSantis what steps his administration will take to address the root causes of global warming, which is why sea levels are rising, DeSantis refused to play along with all that silly "science," because he was there to talk about what he's doing, not why he needs to do it.

What I found is, people, when they start talking about things like global warming, they typically use that as a pretext to do a bunch of left-wing things that they would want to do anyways. We’re not doing any left-wing stuff. What we’re doing, though, is just reacting to the fact that, OK, we’re a flood-prone state, we do have storms.

The projects, however many there are, and whatever they cost, are the first of a series of infrastructure improvements authorized earlier this year by a bill called the "Statewide Flooding and Sea Level Rise Resilience Plan," which itself manages not to include the word "climate" either. DeSantis promised that "many hundreds of millions more” in spending under the bill will come, even if it goes toward things that are absolutely not socialist, like raising the level of roads, monitoring water levels in canals, improving flood forecasting, and so on. The infrastructure upgrades are all absolutely necessary, even if no one says why.

DeSantis went on to warn,

Ominous though that sounded, the Florida Phoenix noted, DeSantis didn't specify what they might include. Probably ungodly stuff like solar and wind power, electric vehicles, and maybe even face masks for lesbian doctors performing abortions while teaching critical race theory.

Okay, fine, DeSantis did come up with one thing the Radical Left would probably try to do, because it hates freedom and America:

If you look at the price of gas now, just imagine, if they had their way, gas would be six or seven bucks a gallon, and we need to make sure people are able to have affordable energy.

And indeed, DeSantis does have a point, at least in the very long term: As more and more of America gets its energy from renewable energy and switches to an electric vehicle fleet, gasoline will at some point in the next few decades become a pricy novelty item, although with exceptions for classic vehicles, the old cars that burn it will become worthless. We really should let the planet become too warm to sustain its human population to make sure gas only costs four bucks.

In conclusion, it's nice to see Florida is willing to at least take some action on dealing with the effects of climate change, even if nobody is allowed to say it's happening. Just don't talk about doing anything to solve the actual problem, OK?

Yr Wonkette is funded by reader donations. if you can, help us keep our heads above water with a monthly $5 or $10 donation!