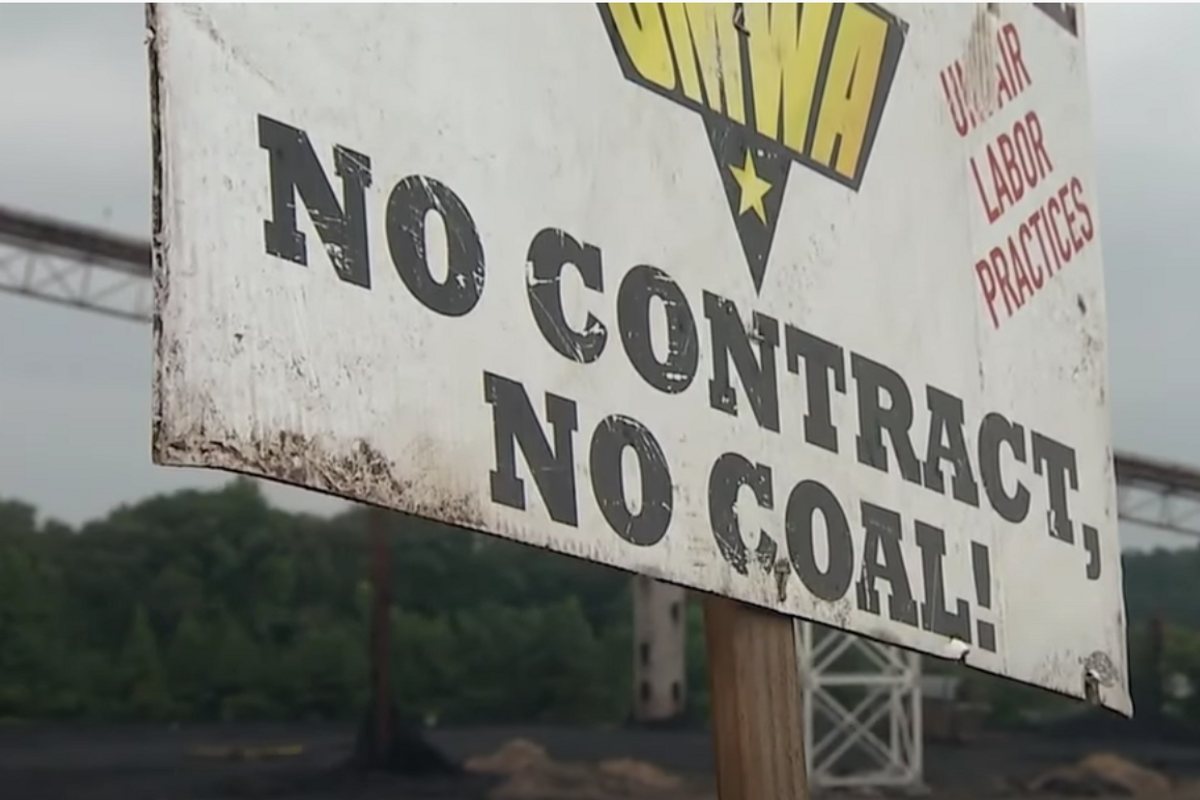 Last week, the Wall Street Journal published an article about billionaire BlackRock CEO Laurence Fink titled "Larry Fink Wants To Save The World (And Make Money Doing It)." This week, Senators Bernie Sanders, Elizabeth Warren, and Tammy Baldwin have decided to take him up on that, sending him a letter encouraging him to intervene in the strike at Warrior Met Coal, in which he is the largest shareholder.

The Alabama coal miners working for Warrior Met Coal, represented by the United Mine Workers of America, have been on strike since April of 2021, and for good reason. The workers took major pay cuts and reductions in health and retirement benefits to help the company stay afloat in 2016, and instead of restoring those benefits once the company became profitable again, Warrior Met Coal chose instead to enrich its own executives. As BlackRock — the world's largest asset manager, managing nine TRILLION in institutional investments — was perhaps the largest beneficiary of Warrior Met Coal's profitability, the Democratic senators are hoping that Fink will be able to influence the company to treat the workers fairly and come to the table to discuss a new contract in good faith.

We hope you appreciate the kind of conditions that the miners at Warrior Met have experienced. The Warrior Met miners have worked up to 16 hours a day, seven days a week. The mines they work in are up to 2,100 feet deep and are extremely dangerous, releasing toxic, flammable and explosive methane gas.

In 2016, these coal miners agreed to a $6 an hour pay cut – more than 20 percent of their average salary – and a substantial reduction in their healthcare and retirement benefits as part of a restructuring deal made by private equity firms. While the extraordinary sacrifices made by the miners saved the company an estimated $1.1 billion over the past 5 years, the executives at Warrior Met and their Wall Street investors made out like bandits.

Since 2017, Warrior Met has rewarded $1.4 billion in dividends to its wealthy shareholders while handing out bonuses of up to $50,000 to its executives. Yet, now that the company has returned to profitability and has seen its stock price skyrocket by 250 percent during the pandemic, Warrior Met has offered its workers an insulting $1.50 raise over 5 years and has refused to restore the healthcare and pension benefits that were taken away from them five years ago.

Outrageously and unacceptably, the company is demanding the power to fire workers who engage in their constitutional right to strike and give seniority to new hires, rather than miners who have given their adult lives to Warrior Met.

And if you think that's bad, consider the fact that picketing workers have been nearly run over on three occasions by those sympathetic to management. That's not a good look. Running people over for engaging in their constitutional right to strike is not a very nice thing to do, and something one might hope shareholders would look down upon. Maybe not everyone was raised to never cross a picket line, but one would hope that we could all agree that crossing one in a Mazda is going a bit too far.

Mr. Fink: Our request to you is simple. BlackRock’s Board must publicly demand that Warrior Met negotiate in good faith and agree to a reasonable contract that treats workers with dignity and respect. In addition, BlackRock’s Board should work with other shareholders to collectively express to Warrior Met that it is in the interest of shareholders to negotiate in good faith and work to end the strike.

That seems fair enough, and it's possible that it will work, as Fink has previously pushed BlackRock's clients toward becoming more responsible with regards to climate change.

BlackRock manages more than $9 trillion, making it by far the largest money manager in the world. The colossal pool of capital makes Fink one of the most powerful investors and empowers him to pitch serious campaigns against company managers or directors who don’t respect his requests.

Unlike many money managers who are careful not to upset clients, Fink has over the years made climate change his central political cause. He has for years encouraged corporate executives to reduce carbon emissions and shrink their environmental footprints.

Fink took his campaign a step further in 2021 when he called on all companies “to disclose a plan for how their business model will be compatible with a net-zero economy.” He added at the time that his firm planned to change its investment process and how its nonpassive funds could dump holdings that don’t adhere to its climate goals.

That is lovely. And now he can ask them to please pay their workers fairly, and everyone will be happy. Fink should in fact be grateful to the senators for giving him this opportunity to do the right thing and to help people.