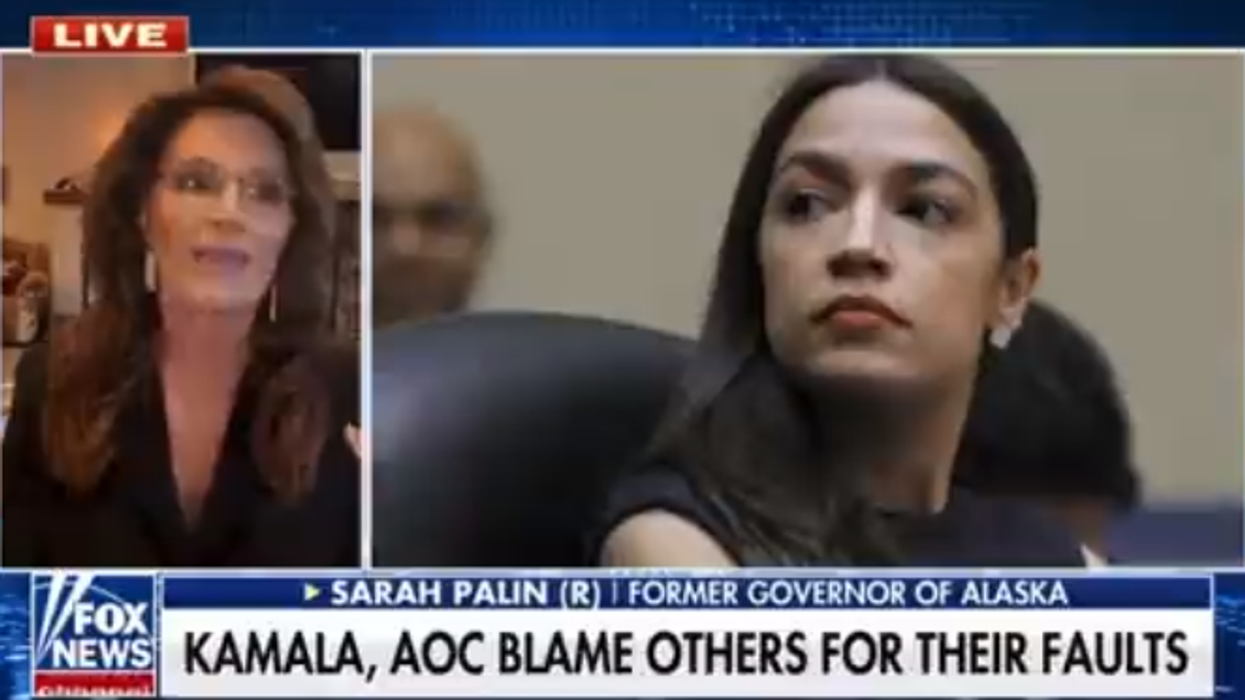 Here's a totally out of context quote, then we'll go back and explain how we got here:

PALIN: Yeah, OK, take this issue though with her suggestion of dating and um attraction to someone and uh blaming her failures on that, um, that obsession with sex! [...] What people do in their own, the privacy of their own bedrooms, all those things that have to do with privacy and sex — the liberals, not the conservatives, are the ones who POUND, POUND, POUND after that.

Remember the olden days when we got to transcribe Palin's mangling of the English language on a daily basis? Simpler times.

Remember that picture of Democratic Rep. Alexandria Ocasio-Cortez dining maskless (outdoors) in Florida at some kind of drag brunch, which set wingnuts off and made them upset she was dating a white man?

Wonkette wrote about that exactly one week ago, but the pic came out before the new year, and Trump deplorable Steve Cortes made grunts on Twitter about AOC's boyfriend's "hideous sandals" on December 31.

It\u2019s starting to get old ignoring the very obvious, strange, and deranged sexual frustrations that underpin the Republican fixation on me, women,& LGBT+ people in general.\n\nThese people clearly need therapy, won\u2019t do it, and use politics as their outlet instead. It\u2019s really weird
— Alexandria Ocasio-Cortez (@Alexandria Ocasio-Cortez) 1640979981

If Republicans are mad they can’t date me they can just say that instead of projecting their sexual frustrations onto my boyfriend’s feet. Ya creepy weirdos

It’s starting to get old ignoring the very obvious, strange, and deranged sexual frustrations that underpin the Republican fixation on me, women,& LGBT+ people in general. These people clearly need therapy, won’t do it, and use politics as their outlet instead. It’s really weird

All that is true.

You know how MAGA types always scream "DEBATE MEEEEE!!!!1!!!1" at Alexandria Ocasio-Cortez and act like she literally cut their dicks off when she ignores them? Relatedly, you know how those surveys come out from time to time, which Trumpers get so mad about, that show that liberals have zero desire or willingness to date them? Know how youngs are always writing "no MAGA trash" on their GrindrBumbles? Oh, they get so angry about all that. They scream about "intolerance." They feel entitled to take whatever they want, so finding out they are completely undesirable to non-deplorables, who view them as people with zero to offer, cuts them deep.

And yeah, it comes out in weird ways, like their obsession with Alexandria Ocasio-Cortez, which has been stewing since she was first elected. And yes, comments about AOC's boyfriend really do come off as barely veiled wingnut rage over the fact that this woman, this progressive woman, would never look at them in one billion years.

And that is why the fuck Sarah Palin was on Fox News last night. Because clearly America needed to hear her opinion on what AOC tweeted at Steve Cortes.

You're gonna want to find a sturdy chair, it's been a while since Wonkette readers were used to sifting through Palin's daily word salad:

PALIN: It amazes me, though, her and other liberals, socialists, their ability to deflect from what the issues truly are. And here her obsession with, at least suggestions of, always gender and sex, even. It um you know, I truly believe that there are enough Americans who get it and understand what her tactic is, and that is to deflect from what the real issues are.

At least suggestions of always gender and sex even, yes?

PALIN: Yeah, OK, take this issue though with her suggestion of dating and um attraction to someone and uh blaming her failures on that, um, that obsession with sex! Look how the liberals, Rachel, want to pound that into the public's head, that, uh, advertising who is attracted to who. What people do in their own, the privacy of their own bedrooms, all those things that have to do with privacy and sex — the liberals, not the conservatives, are the ones who POUND, POUND, POUND after that. And obviously it’s a tactic so that she doesn’t have to be held accountable.

Accountable for what? Palin does not say.

PALIN: And obviously it's a tactic so that she doesn't have to be held accountable. It sounds like she hasn't been held accountable for much, maybe in her entire life. She does not have that foundation. You know, and that public service heart that is so necessary in order to serve well and be accountable!

AOC doesn't have a heart for public service. Not like the half-term quitter grifter from Wasilla up here.

Elsewhere in the interview, Palin called AOC and Vice President Kamala Harris "fake feminists," because she is the proper judge of that.

"Man, these fake feminists who bring the women's movement back so far by channeling everything right on back to 'Oh, it's our gender, doggone it. People don't like us because we're female,'" she said. "It's your work ethic. I'm really thankful that I was brought up in a place where gender truly has not mattered."

Doggone it, we're women! Pop quiz: How braindead do you have to be to think that is either Harris's or AOC's message about literally anything?

BTdubs, that quote came from Fox News's writeup of the same interview, which curiously did not include the POUND POUND POUND part we lovingly transcribed.

Don't hide her light under a bushel, Fox. She's got shit to say.