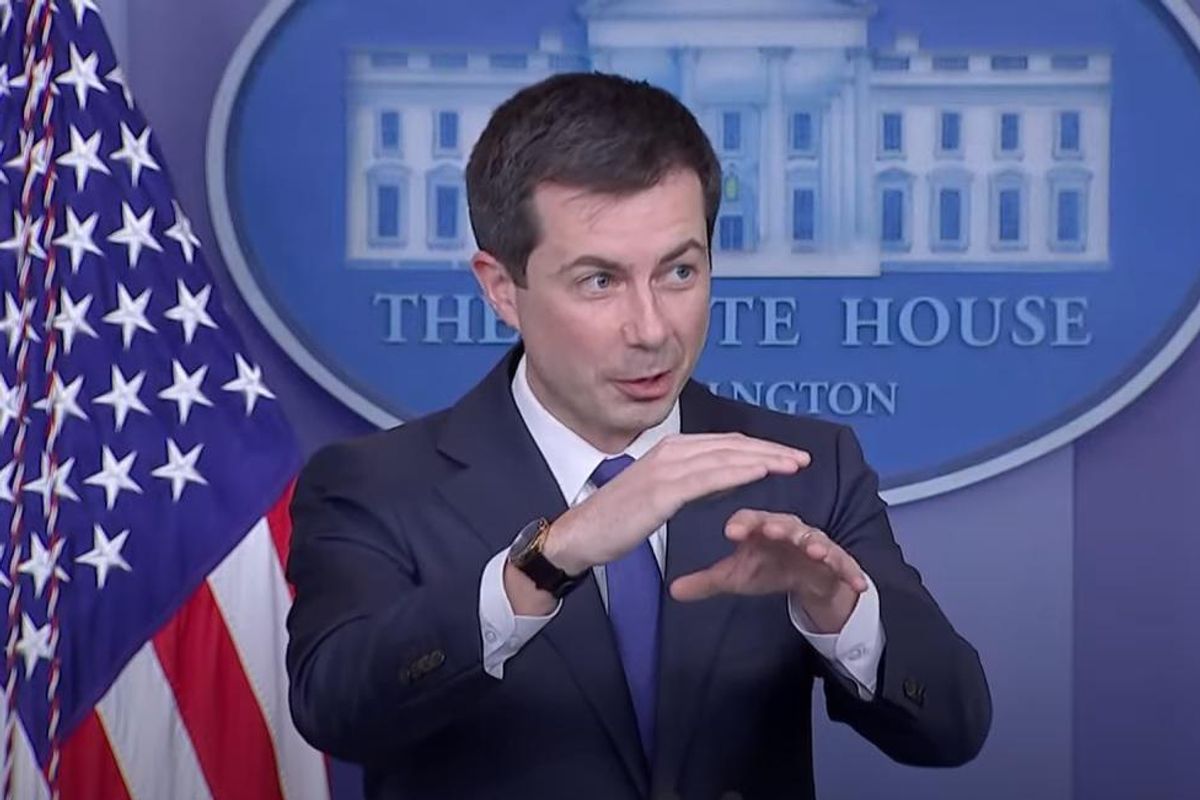 Wingnuts and the Professionally White Aggrieved Class had a field day Monday mocking Transportation Secretary Pete Buttigieg for his ridiculous, absurd, utterly lunatic suggestion that roads could be racist. What a nutty liberal thing to say, they all scoffed, because of course they're the folks who go out of their way to know as little about the world as humanly possible. It all started during the daily press briefing, when Buttigieg joined deputy Press Secretary Karine Jean-Pierre to talk up the passage of the Bipartisan Infrastructure Framework (BIF).

Grio reporter April Ryan asked Buttigieg a question about how the just-passed Infrastructure Bill would implement the White House's "Justice40" Initiative, which is designed to follow through on Joe Biden's campaign promise that 40 percent of federal investments in clean energy and climate projects will benefit disadvantaged communities.

Ryan also asked Buttigieg to explain how the administration plans to "deconstruct the racism that was built into the roadways," shorthand for past highway and urban planning decisions that divided lower income and minority communities for much of the 20th century, particularly (but not limited to) during the freeway-building boom of the 1950s and '60s.

Here's the exchange, cued up to Ryan's question:

Buttigieg, who at heart is a top notch community college instructor (that is absolutely not faint praise), was happy to discuss, and it's clear he knew that a lot of viewers may not have heard any of this before.

I'm still surprised that some people were surprised when I pointed to the fact that if a highway was built for the purpose of dividing a white and a Black neighborhood, or if an underpass was constructed such that a bus carrying mostly Black and Puerto Rican kids to a beach — or it would have been — in New York, was designed too low for it to pass by, that that obviously reflects racism that went into those design choices.

I don't think we have anything to lose by confronting that simple reality. And I think we have everything to gain by acknowledging it and then dealing with it, which is why the Reconnecting Communities — that billion dollars — is something we want to get to work right away putting to work

You kids who have already read up on Wonket's listicle of what's in the infrastructure bill know that it includes a billion dollars aimed at undoing some of the damage of the bad old days of urban planning, when freeways were run through poor and minority communities, cutting neighborhoods in half or demolishing them altogether — and worse, concentrating vehicular pollution in areas where people had little political power to stop it. (As with so much in BIF, the original Reconnecting Communities goal was $4 billion.)

That was all the wingnuttosprhere needed to crank up the outrage machine over the Biden administration's Woke Infrastructure Madness. Before getting into it, a bit of context, via NYC Urbanism: Back in the 1920s and '30s, New York City's Master Planner, Robert Moses, did indeed design the Long Island Parkway to be primarily accessible only to cars, and therefore to nice white families who could afford cars. Historian Robert Caro wrote in his 1974 book The Power Broker: Robert Moses and the Fall of New York that Moses specified that access to the city's beaches should be limited, both by blocking a spur of the Long Island Railroad to Jones Beach, and by ordering that bridges over the parkway be

too low for buses to pass. Bus trips, therefore had to be made on local roads, making the trips discouragingly long and arduous. For Negroes, whom he considered inherently "dirty," there were further measures. Buses needed permits to enter state parks; buses chartered by Negro groups found it very difficult to obtain permits, particularly to Moses' beloved Jones Beach.

While the beaches weren't segregated by law, Caro wrote that Black lifeguards were stationed only at the remotest beaches, and that buses carrying Black people who did take the more time-consuming trip from the city were shunted off to remote parking lots as well. The Washington Post notes that some of Caro's details, based on interviews with Sidney M. Shapiro, who worked closely with Moses, are disputed (some historians say most bridges had low clearance at the time), but one former skeptic went out and measured the Moses bridges, and they were substantially lower than others built at the time. And nobody disputes that Moses was racist.

Needless to say, Tucker Carlson charged in Monday night, mocking the very idea that roads could possibly be racist, because somewhere in his past he suffered Amelia Bedelia Syndrome (a term I've stolen gleefully from Wonkette's own Stephen Robinson):

"Here we have news, according to the Department of Transportation secretary, overpasses in New York were designed to keep buses of Black and Puerto Rican kids from getting to the beach," Carlson said. "And here's the amazing part, those very same overpasses somehow allowed buses full of white kids to get through. How does that work?!"

Tucker and his hyena laugh got us there, we are truly stumped except ... they didn't. The same overpasses did not allow buses of white kids through, no matter how much Carlson may have sneered that the overpasses must have "actually drawbridges manned by vigilant bigots with binoculars" who would lower the bridge whenever a "Puerto Rican bus" would approach. White children and families took cars, or if they were on buses, they took the same slower route on local roads, or were already from Long Island and didn't go under any overpasses.

This is well-established history. Mockery and sneering don't not make it so.

Following the uproar, plenty of people took to Twitter with concrete — and asphalt — examples of what the midcentury freeway boom did to once-intact urban neighborhoods. Here's are a couple of stark examples, from NYU historian Thomas Sugrue:

Here is a before and after of Detroit's Black Bottom and I-375.pic.twitter.com/GaokAq2rxX

Also, Ted Cruz tweeted, "The roads are racist. We must get rid of roads." He is a smart man who went to Harvard Law.

We'd also note that most outlets only quote the portion of the q-and-a that we did above, but as you see in the video, and the White House transcript, Ryan and Buttigieg did talk quite a bit more about the history — and more importantly, the challenge of starting to set it right. Here's a bit to chew on:

Ryan: [Addressing literally structural racism is] such a heavy lift. I mean, you'd have to reconstruct communities that this happened to. As you said, some of these beltways and interstates and roadways were built before the Civil Rights Act, before the Voting Rights Act, and were made — meant to be racist. But how do you go about redefining and replanting these roadways and communities that are already settled in since then?

Buttigieg: Yeah. So, what's interesting is it's going to vary by community and we have to listen to the community. Sometimes it really is the case that an overpass went in a certain way that is so harmful that it's got to come down or maybe be put underground.

Other times, maybe it's not that way. Maybe the really important thing is to connect across it; to add rather than subtract. And that's where we don't want to impose a one-size-fits-all answer from here.

But when we were out in Syracuse, for example, looking at I-81, we saw the local vision for how they want to get past those divisions. And those local ideas are going to be taken very seriously as we try to meet the spirit of this law.

As the Washington Post points out, this is a great chance to take institutionalized racism seriously and learn from the history of our cities and physical infrastructure, at a moment when the Right is denying any such thing happened, because all that exists is today, and of course tonight's ratings.

Yr Wonkette is funded entirely by reader donations. If you can, please give $5 or $10 a month so we can keep your history circuits humming.