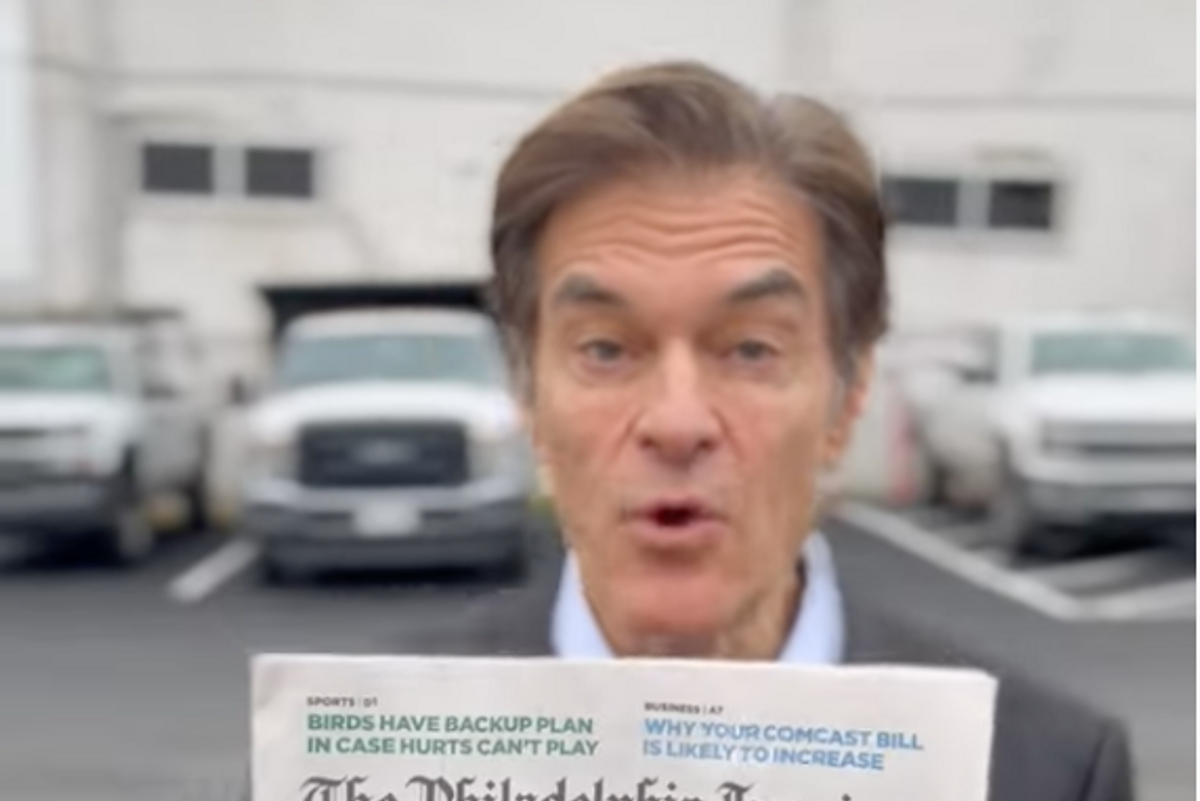 Celebrity GOP Senate candidate Mehmet Oz is very upset the Philadelphia Inquirer won’t call him “doctor.” Oz didn’t peddle pseudoscience for years on Oprah Winfrey’s show so people would call him “mister.” However, the Inquirer’s style guide is clear on the matter:

Do not use Dr. on first reference for anyone with the title, whether they are a medical doctor or have a doctorate in a nonmedical field, to avoid complaints of unequal treatment from individuals who worked hard to achieve doctorates in nonmedical fields.

The Inquirer can’t share the doctor title with everyone in the class, so they’re keeping it at home. It’s a little second grade, but an otherwise reasonable policy. The only exceptions are obituaries — the poor bastard’s dead so just call them “doctor” and make their family happy — and Dr. Martin Luther King, which we imagine Tucker Carlson might think unfair to white nationalists with medical degrees, if he heard about it.

Oz released a cranky YouTube video defending his identity as a doctor who promotes fad diets on TV.

OZ: Last week the Philadelphia Inquirer had me on their front page as Dr. Oz. This morning they just announced no more “doctor," even though I'm a practicing physician, taking care of patients. I've done thousands of heart surgeries. They don't want to call me “doctor" anymore. I won't be canceled.

Oz has easily adopted whiny conservative victim rhetoric. It’s probably covered during orientation for Republican politicians. The Inquirer has obviously not “canceled” Oz, as he literally still has his crappy TV show. Because of equal time rules, Oz’s show has been pulled from New York and Pennsylvania markets, and starting in mid-January, Sony Pictures Television, which syndicates his show, plans to fill Oz’s time slots with a program called “The Good Dish,” hosted by Oz’s daughter, Daphne. This presumably solves the problem of Daphne Oz not having her own TV show. America can rest easy.

Democrat Val Arkoosh is a physician in obstetric anesthesiology (serious shit), and she’s also running for the Pennsylvania Senate seat. CNN pointed out that the Inquirer hasn’t called her doctor, either, so this isn’t the media “attempting to put their finger on the scale of an election,” as Oz whines. The Inquirer isn’t trying to “cancel” Oz’s medical degree, although some medical board maybe should. Oz is the same asshole who suggested America could reclaim its “mojo" by opening schools during a pandemic (before there was a vaccine). He considered this an “appetizing opportunity” (hey, his daughter is the “chef” here) because the mortality rate — for children — would be only two to four percent. He later claimed he “misspoke.” Maybe somebody explained math (and pediatric genocide?) to him.

Arkoosh thinks she can distinguish herself in the Democratic primary against Rep. Conor Lamb and Lt. Gov. John Fetterman because, despite never appearing on Oprah, she’s a real doctor. She’s pitching herself as an “anti-Dr. Oz.” She told the New York Times, “It really does take a doctor to stand up to a doctor.” That is likely the rule at all doctor-exclusive Fight Clubs.

“I don’t even know how [Oz] still has a license, with some of the stuff that comes out his mouth,” she said of his promotion of unproved Covid-19 treatments early in the pandemic.

CNN host Michael Smerconish suggested it might even not matter if Oz has a medical license, because “Dr. Oz” is the candidate’s public brand.

SMERCONISH: It really is the way [Oz] is known. It is his brand. It’s like “Madonna” [or] "LeBron.” For some people, that’s just how they’re recognized.

No one’s debating whether the Inquirer should refer to Oz exclusively by his first name or an unpronounceable symbol. It might’ve been closer to the point if Smerconish had mentioned “Dr. John” or “Dr. J.” After comparing Oz to Madonna, which is itself a form of blasphemy, Smerconish asked the Inquirer’s grammarian columnist Jeffrey Barg why Dr. King was an exception to the rule.

We’re not going to bother explaining why Oz is not remotely similar to the Rev. Dr. Martin Luther King. We’re done here.