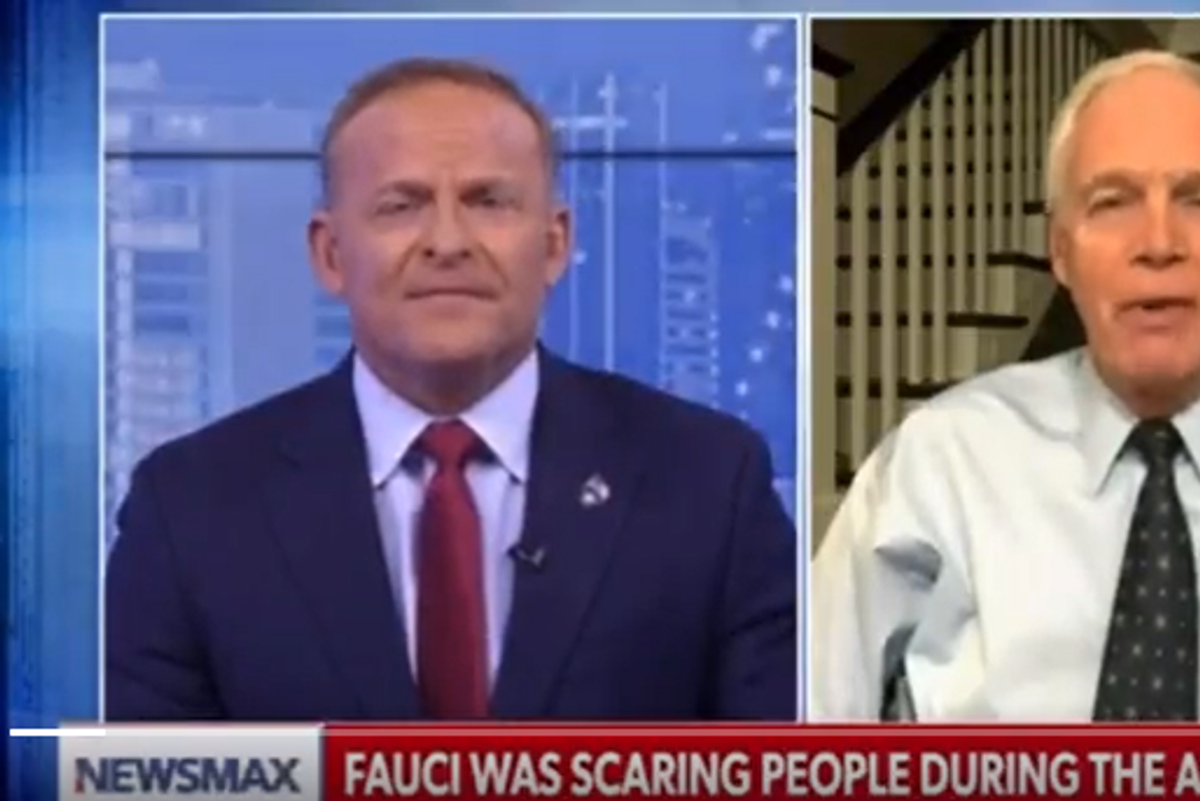 It's must be a real pain in the "B"-word to be the Senate's Dumbest Republican. Seriously, in a class of Republicans that's already pretty dumb, to bear the burden of being THEEE dumbest at all times? To be followed around by cartoon springy sounds and other sound effects, like "BOIIIIIIIIIIIING"? To pass Marsha Blackburn in hallways and know that you're dumber?

We can't be for certain, but we reckon Wisconsin's GOP Senator Ron Johnson might have been feeling some of his stupids yesterday on Newsmax with that weenus host Grant Stinchfield, saying out loud and emphatically that "I have NEVER downplayed the tragedy of both AIDS and COVID."

Of course, as the tweet implies, mean Acyn from Media Matters spliced a clip at the end of Ron Johnson downplaying COVID back in July.

Ron Johnson: I have never downplayed the tragedy of both AIDS and COVID. These are deadly diseases. I would never downplay that\nVS \nRon Johnson 7/20/21pic.twitter.com/99vwbTfEmD
— Acyn (@Acyn) 1638928182

Of course, the deadly simple fact is that Johnson has been downplaying and spewing disinformation on COVID since the beginning. Lord, he's been spewing so much disinformation you'd think he was getting it directly from a known asset of Russian intelligence. He has lied and said we don't even have an approved COVID vaccine in America. Like many Republicans, he's been on the horse paste train. Before that he was on the hydroxybonercream train.

If Wonkette's Evan Hurst may quote Wonkette's Liz Dye, typing around the very beginning of the pandemic, it sounds like he's been downplaying it from the beginning:

"I'm not denying what a nasty disease COVID-19 can be, and how it's obviously devastating to somewhere between 1 and 3.4 percent of the population," Johnson told reporter Craig Gilbert.

Glad to be a helpful reminder, Senator.

And then with AIDS, you won't believe this, but Wonkette literally wrote about it last week when Johnson was doing that thing where he rests his top teeth on his bottom lip like an intelligent person and said — on World AIDS Day, no less — that Dr. Anthony Fauci had "overhyped" HIV/AIDS, and that he was doing the same thing with COVID. He said that! About Dr. Fauci! And it sounds a lot like "downplaying" AIDS to us!

Here's the clip, in case anyone needs to see it again:

!!\n\nRon Johnson on Omicron:\u00a0"Fauci did the exact same thing with AIDS. He overhyped it. He created all kinds of fear, saying it could affect the entire population when it couldn't. He's using the exact same playbook with COVID, ignoring therapy, pushing a vaccine."pic.twitter.com/uL2IMThje7
— Tim Hogan (@Tim Hogan) 1638395208

Asked about Johnson’s comments by co-host Jake Tapper on CNN’s “State of the Union,” Fauci said he did not know how to respond to such a remark considering the high death tolls caused by both AIDS and COVID-19.

“So I don't have any clue of what he's talking about,” he added.

Nobody does. That's why he's the dumbest in the whole Senate.