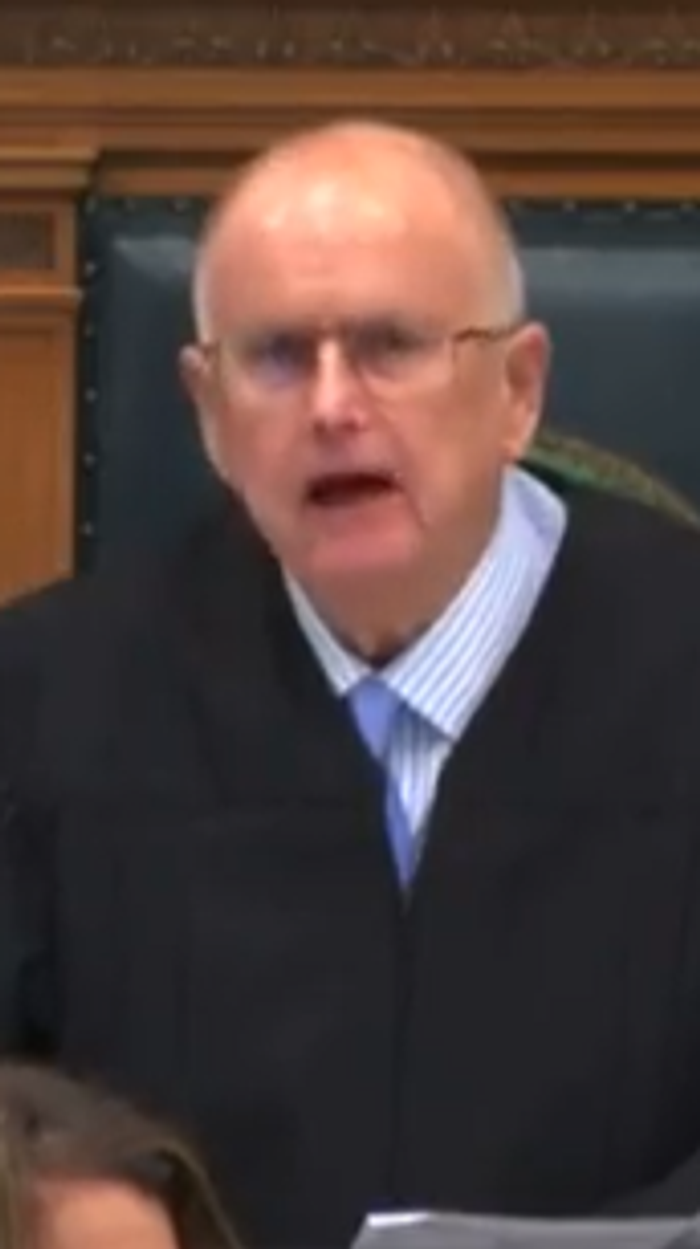 So hey, did anything weird happen in the Kyle Rittenhouse trial yesterday? You'd think the answer would be no, since the jury is currently deliberating on the question of whether Rittenhouse is "obviously guilty" or whether the verdict is "who could have possibly foreseen this all going so poorly for the dearest little white boy we ever did see?"

But the answer is yes, weird shit went down, and it got weird because of Judge OldBalls Schroeder, who's been showing his whole entire white ass ever since the trial started.

Judge OldBalls, whose real name is "Bruce," appears to have spent the trial — either by design or simply by his own incompetence — trying to make sure Rittenhouse gets acquitted for shooting and killing those guys in Kenosha, after his mom drove him out of state and dropped him off right in time for some unarmed guys to run headlong into his gun. (Kyle Rittenhouse is very upset that happened #LOUDGASPINGHORSETEARS.)

For example, Schroeder has previously explained that he doesn't want you calling the men who are dead because of Rittenhouse's gun "victims," but he's OK with you calling them arsonists and looters. (You know, because of how they got a fair trial and it was determined that they did those crimes.) When Schroeder got a call on his cell phone during the trial, his ringtone was the official theme song of the stupidest of American idiots, "God Bless the USA" by Lee Greenwood. He thinks it's entirely possible that when you zoom in on an iPad, it inserts all new details into the picture.

(Schroeder is currently considering two requests for mistrial, including a new one from the defense yesterday arguing that the main drone video the prosecutors entered into evidence was of inferior quality.)

At one point, he asked the courtroom to give a round of applause to one of the defense's witnesses, because that person is a veteran. You know, TOTALLY NORMAL courtroom stuff.

He is perhaps not the best judge to be handling this case, is what we are saying.

That brings us to yesterday, when Schroeder told the courtroom that it IS TOO fair that he didn't allow the alleged victims to be called victims. How would you like it, he asked, if you were a defendant and everybody just kept talking about your "victims"? Why won't you just call them a "complaining witness"? That is what Schroeder wanted to know. Wonkette reached out to the two men who died on the other side of Kyle Rittenhouse's gun to see if they had anything to complain about, but the dead don't return phone calls.

And of course, OldBalls Schroeder needed to bitch some more about the media's coverage of the trial, and said in the future he's going to "think long and hard" about allowing TV coverage in his courtroom. He doesn't want to have to do that, but unfortunately the media has been "grossly irresponsible" with this trial, in his estimable estimation. (Probably doesn't even think it's fair to call him "OldBalls Schroeder.")

Meena Harris noted on Twitter yesterday that Schroeder, age 75, has been on the bench for almost 40 years, and that he often runs for re-election unopposed. That was in response to Sherrilyn Ifill, president and director-counsel for the NAACP's Legal Defense and Educational Fund (LDF), tweeting that "When I tell y'all to focus on judicial elections in your state, I mean it."

We are just suggesting that perhaps Judge Schroeder is not the prize-winning Wisconsin State Fair cheese sculpture he used to be.

So that's maybe something he can do after OldBalls's court of law justice reads the verdict and finds the defendant white, we mean not guilty.