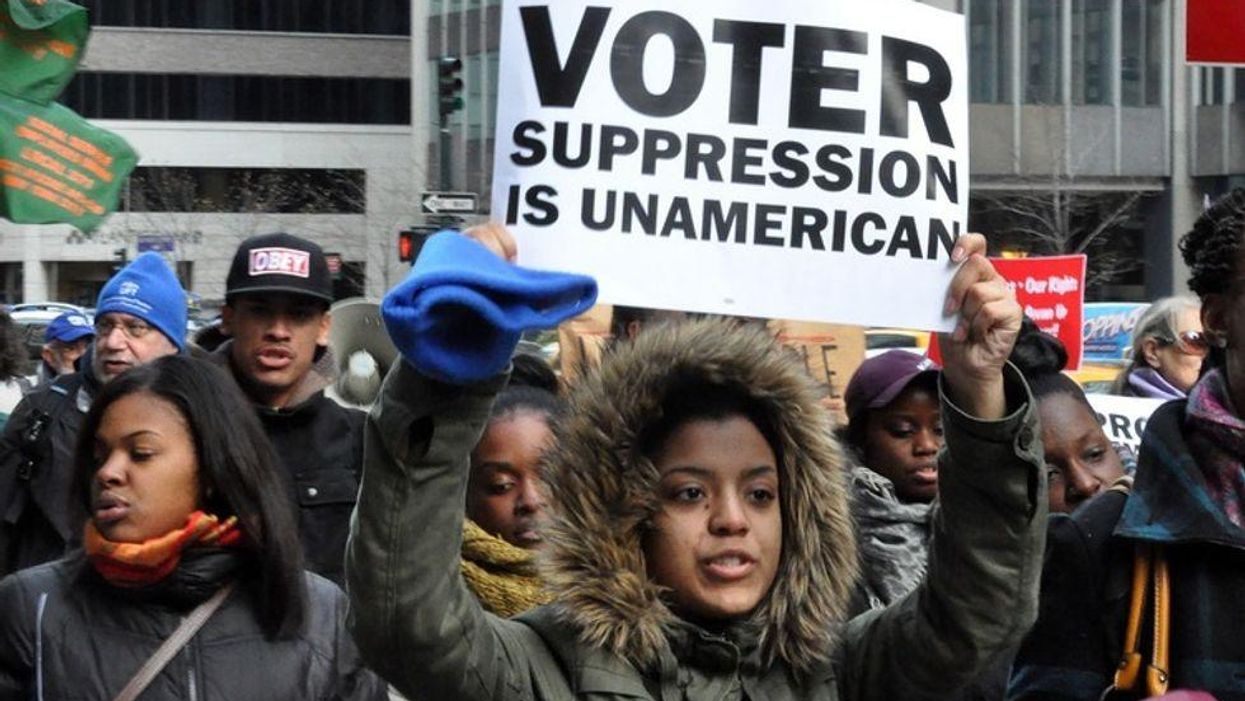 In another of their signature moves aimed at making Democrats' blood pressure spike, Senators Joe Manchin (D-West Virginia) and Kyrsten Sinema (D-Arizona) both announced yesterday that they would reject any efforts to end or weaken the filibuster. That means this week's push to pass protections for voting rights appears to be dead in the water.

Nonetheless, Senate Majority Leader Chuck Schumer announced late last night that he will move ahead with debate on the voting rights legislation in the Senate, although that debate will now be delayed until next week, starting Tuesday, because of a coming winter storm and the news that Democratic Senator Brian Schatz of Hawaii had tested positive for coronavirus earlier in the week, and has to quarantine. That means the vote on passing the legislation will miss Schumer's original deadline of Monday, the Martin Luther King Birthday holiday, which was pretty inconsiderate of the virus.

Schumer's plan remains the same as it had been: First, Schumer will open debate on the Freedom to Vote Act and the John Lewis Voting Rights Enhancement Act, which are now combined into a single bill for a fun tricksy procedure to prevent Republicans from blocking the debate from even starting. Then, Schumer will call a vote to end debate and proceed to a final vote, which Republicans will filibuster, requiring 60 votes to end debate. Since there's no way 10 Republicans will join in, Schumer would then call a vote to modify the filibuster so debate can end with just their 50 votes and a tie-breaker by Kamala Harris, and then the voting rights bill could pass with that simple majority.

Except now that looks unlikely, because Manchin and Sinema both said again yesterday they love the filibuster much more than any mere legislation of the moment, even legislation that would prevent Republican state legislatures from killing democracy. No sense preserving democracy if it means a change in sacred Senate traditions, after all.

Sinema went first, with a Senate speech in which she praised a model of bipartisan negotiation in the Senate that hasn't existed for decades, if ever, and said that American Democracy somehow depended on preserving the ability of the minority party to obstruct the majority from ever passing anything. She insisted that she really supports the voting rights legislation and is very very concerned — like, Susan Collins levels of concern — about Republican efforts in the states to restrict voting. However, she won't allow her party to weaken the filibuster, because that would be so divisive. Yes really:

“These bills help treat the symptoms of the disease, but they do not fully address the disease itself,” Ms. Sinema said. “And while I continue to support these bills, I will not support separate actions that worsen the underlying disease of division infecting our country.”

The problem with that logic, of course, is that the divisions in America have far more to do with a multi-decade effort by the Right and its closed-loop media to divide people with culture wars, economic resentments against other Americans, and the gospel of Government Is The Problem. It doesn't have a single damned thing to do with Senate rules, except insofar as Congress as a whole is seen as corrupt and useless, because after all, government bad.

If you gave Americans a multiple-choice test on what the filibuster even is, a substantial percentage would answer it's a delicious frozen treat from Dairy Queen.

Sinema also complained that Democrats should have done more to get Republicans on board with the bills, because surely the GOP has a lot of reasonable members who abhor electoral cheating by Republicans. That seems a bit odd, given that Republicans have repeatedly refused to support any such efforts, including unanimously filibustering the Freedom to Vote Act, which Manchin had constructed specifically to get Republican support.

Also too, Sinema chose to give her speech shortly before President Biden arrived on Capitol Hill to speak at a Democratic congressional luncheon, so trashing one of his central priorities was a very effective way to call for civility, too. The New York Times reports that several of her Senate colleagues considered the timing of the speech a "dagger delivered to the president in a way that would draw maximum attention to Ms. Sinema," while others "groused that Ms. Sinema seemed glued to her phone during much of the meeting with the president." We bet there may even have been some overlap between those groups.

For his part, Manchin waited until after the luncheon to issue a statement saying filibuster now, filibuster tomorrow, filibuster forever (at least until Republicans have the presidency and the Senate and want to pass something with a simple majority). Manchin explained that the filibuster has always been needed, even when it didn't exist, and that his political idol, fellow West Virginian Robert C. Byrd, had defended the filibuster as the last protection against "tyranny" — in 2010, at least, shortly before he died.

Manchin looks up to Byrd as some sort of holy Jedi of the Senate, even if the Senate Byrd served in has now become only a glowing special effect that makes Manchin think of the good old days. Yoda isn't really there, Joe.

A bit more disingenuously, Manchin said that even very recently, the 60-vote threshold to do anything at all in the Senate has had bipartisan support, so why change things now?

Just four years ago, sixty-one Senators, thirty-three of which were Democrats, sent a letter to Senators Chuck Schumer and Mitch McConnell warning them of the dangers of eliminating the filibuster. That letter presented a united front committed to, ‘preserve the ability of members to engage in extended debate when bills are on the Senate floor.’

Bit of a problem with that, though: There hasn't been a bit of "extended debate" thanks to the filibuster, since now virtually the only way most bills get passed is by reconciliation — Republicans have blocked Manchin's very own Freedom to Vote Act from even getting a minute of debate, extended or otherwise, because bills can't get to the Senate floor in the first place. As for those 33 Democrats who signed that letter four years ago, all but Manchin have decided that the filibuster rule has to be changed to pass voting rights and preserve democracy.

Why, it's as if he hadn't noticed at all!

Following yesterday's luncheon meeting with Democrats, Biden conceded that it's not clear whether Schumer's plan to debate voting rights will succeed, telling reporters,

"I don't know that we can get it done, but I know one thing: As long as I have a breath in me, as long as I'm in the White House as long as I'm engaged at all, I'm going to be fighting to change the way these legislatures are moving," the President added.

And that's where we are: The slog has to continue, because voting rights really are in danger.

Yr Wonkette is funded entirely by reader donations. If you can, please give $5 or $10 a month so we can keep this little mommyblog going too.