In [Patriot Purge, Carlson] drops real truths like: Americans are being held in Guantanamo Bay for their participation in the riot (not true); that a new “war on terror” has been launched against right-wingers (not true); and that it was a false flag attack (ehhh…. probably not true)....

You must pay and subscribe to Fox Nation to watch the documentary, because Fox News will not be airing it.

Fox Nation is a streaming service that features Fox News on-air talent and is promoted on the Fox News site every day, but is totally not Fox News.

The Daily Beast's Will Sommer has the scoop on the director of the film:

Downey and Carlson share writing credit for the documentary series, according to a screenshot the filmmaker posted on Twitter. It’s not clear whether Downey also directed Patriot Purge, but he has retweeted messages from other right-wing figures suggesting he played a lead role in the series’ creation....

Prior to Patriot Purge, Downey was perhaps best known on the right as co-director of Hoaxed, a 2019 documentary from far-right figure Mike Cernovich about alleged media bias against the MAGA movement. Cernovich rose to prominence on the far-right by promoting the baseless Pizzagate conspiracy theory, which held that Hillary Clinton operated a pedophile sex dungeon out of a D.C. pizzeria....

In a 2016 blog post defending the alt-right, Day wrote:

The Alt Right believes Western civilization is the pinnacle of human achievement and supports its three foundational pillars: Christianity, the European nations, and the Graeco-Roman legacy....

The Alt Right believes we must secure the existence of white people and a future for white children....

The Alt Right is a Western ideology that believes in science, history, reality, and the right of a genetic nation to exist and govern itself in its own interests.

And here's a fun fact about Downey, from a now-deleted tweet: 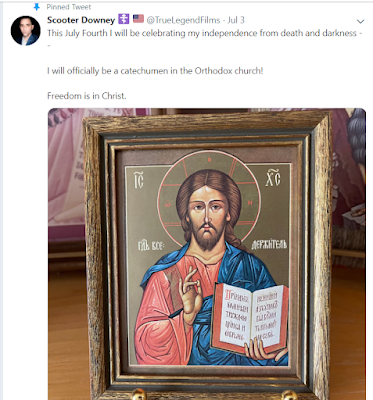 UPDATE: Thanks to djchefron in comments for directing my attention to this 2017 Religion Dispatches piece by Katherine Kelaidis about white nationalists and neo-Nazis who've been drawn to the Orthodox Church, among them Matthew Heimbach, a prominent figure at the Charlottesville "Unite the Right" rally that year. An earlier piece by Kelaidis notes that Heimbach had been photographed in 2014 wielding an Orthodox cross during a physical altercation with an anti-racist demonstrator. 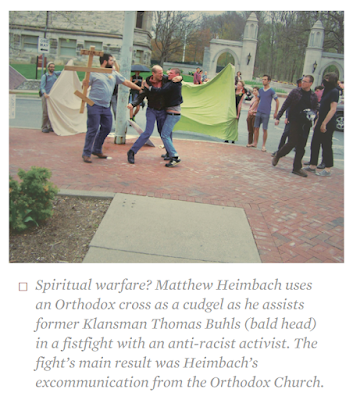