Skip to content
Hi, I'm back. A round of applause for Yastreblyansky -- so many great posts while I was away.

I see that Eric Levitz of New York magazine is, for good reason, lamenting the broad-based popularity of John Roberts:

Earlier this month, Gallup gauged American sentiment toward 11 of the nation’s most prominent public figures. Only one boasted majority support from both Democrats and Republicans, and he happens to be the most effective conservative politician of the modern era.

During his tenure on the Supreme Court, Chief Justice John Roberts has voted to gut the Voting Rights Act, ban limitations on corporate political spending, effectively legalize most forms of political bribery, rewrite the Affordable Care Act in a manner that cost millions of Americans access to Medicaid, restrict the capacity of consumers and workers to sue corporations that abuse them, nullify state-level school-desegregation efforts, sanction partisan gerrymandering, and carve gaping loopholes into Roe v. Wade.

And Roberts nevertheless retains the approval of 55 percent of Democratic voters (along with 57 percent of Republican voters) in Gallup’s new poll. No other official in the survey — not Joe Biden, Kamala Harris, either party’s congressional leadership, Federal Reserve Chair Jerome Powell, or Dr. Anthony Fauci — claimed majority support in both blue and red America.

But we probably shouldn't be surprised -- after all, the three most popular governors in America in their respective states, according to a November poll from Morning Consult, are blue-state Republicans -- Phil Scott of Vermont (79% approval), Charlie Baker of Massachusetts (72%), and Larry Hogan of Maryland (70%), with Republican Chris Sununu of blue-tinged New Hampshire in the #4 spot (67%). It appears that Democratic voters, for better or worse, are quite tolerant of opposite-party members who seem even modestly committed to compromise.

Which contradicts the message of another recent survey that got a lot more attention than this one:

Nearly a quarter of college students wouldn't be friends with someone who voted for the other presidential candidate — with Democrats far more likely to dismiss people than Republicans — according to new Generation Lab/Axios polling.

The supposedly intolerant group of Democrats was a subset of a subset of the Democratic electorate -- young Democrats only, and only the ones in college. I think they have good reasons for their contempt -- but even if you don't, you should realize that this contempt is not shared by the majority of Democrats. Just the opposite, in fact.

Look at the Gallup numbers: 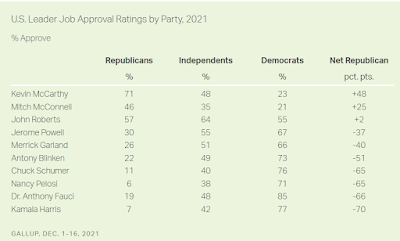 I wish Democrats were more intolerant of Republicans, especially Republicans like Roberts, McConnell, and McCarthy. But if you value tolerance above all else and you landed on the fainting couch when that Axios poll was released, just remember that it provided a distorted picture of Democrats overall -- and maybe you should be a bit more concerned about how much Republicans hate Fauci, Pelosi, Chuck Schumer, and Kamala Harris (not to mention Joe Biden, Barack Obama, Hillary Clinton, and every other prominent Democrat not named Sinema, Manchin, or Gabbard).