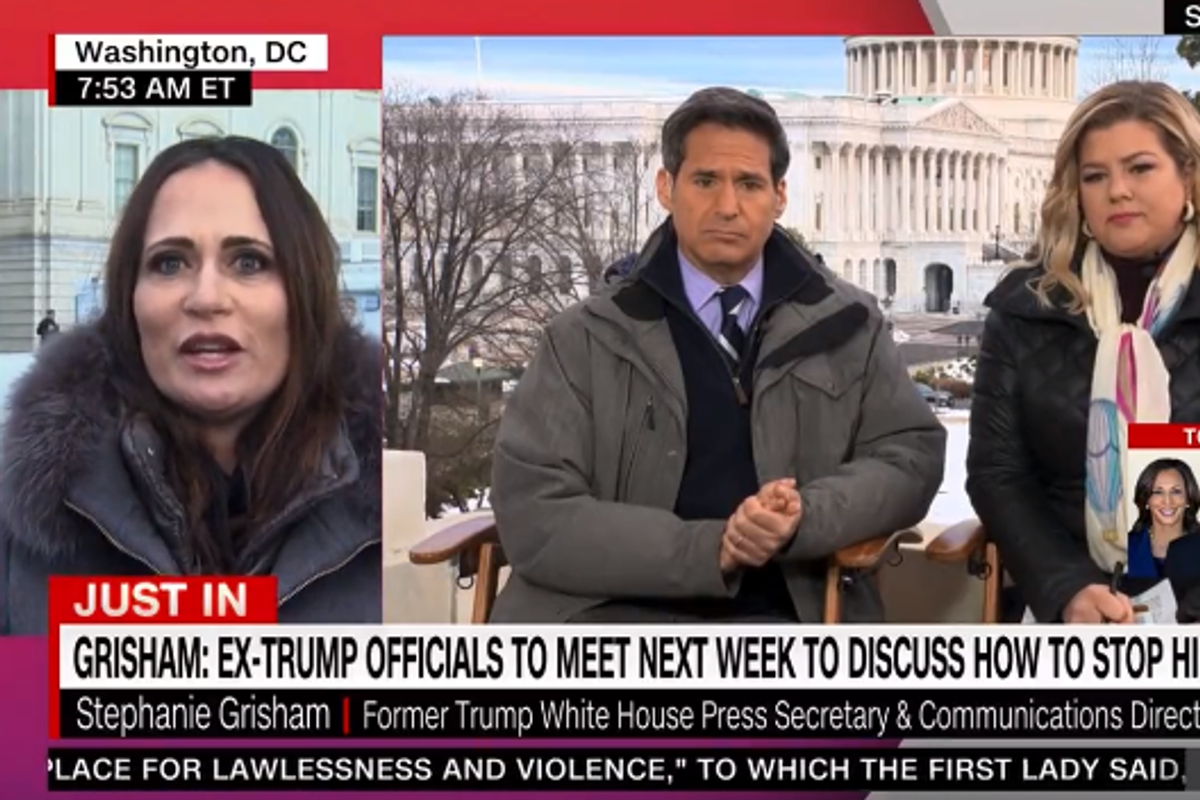 Stephanie Grisham, who served as the right-hand person to former first lady Melania Trump, and who also served as the White House press secretary for a minute, is spilling some WORDS right now. We knew when she wrote that tell-all book that she was fully out of the Trump Crime Family, and of course CNN notes that she was the first Trump official to resign on the actual day of January 6. But the anniversary of January 6 has given Grisham opportunities to make some news.

For one thing, she gave this interview on CNN this morning where she mentioned what she knows about what Donald Trump was doing while the Capitol terrorist attack he birthed — it's his second favorite out of his five children, we hear, after Ivanka — was playing out. One of the anchors asked Grisham what she knew about people who tried to get Trump to stop the American carnage he started, and she said she didn't know, besides how she knows for sure that Melania didn't do dick.

And she said she knew he was in his private dining room "gleefully" watching the coverage, "hitting rewind, watching it again," as he excitedly said "Look at all of the people fighting for me!"

Also, we are not sure we knew about Trump rewinding the TV a whole bunch. Did he have the remote in one hand while he pinched his winky between his thumb and forefinger with the other? Who can say.

In other interesting Stephanie Grisham news, she said on CNN that she and a group of "about 15" former Trump officials are meeting next week to talk about how to "formally do some things to try and stop" Donald Trump:

“Next week, a group of former Trump staff are going to come together, administration officials are going to come together and we're going to talk about how we can formally do some things to try and stop him and also, the extremism, that that kind of violence, rhetoric that has been talked about and continues to divide our country,” the former White House press secretary and chief of staff to the first lady told CNN’s New Day. [...]

The group will be talking about “the most effective tactics” to carry out that message, and that “everybody will have different roles.”

She said that she is personally hoping to “travel the country and talk to people who are believers like I once was.”

We have no idea what that means, but we suppose we'll be curious to find out if it turns out to be something.

And of course, Grisham said last night that she "cooperated fully" with the House January 6 Select Committee as she left from meeting with them last night, on January 6 Eve. So that's fun.

We'll end this post by reminding everybody what a fucking useless dick Melania Trump is, as CNN reminds us of the excerpt from Grisham's book where she asked Melania if she'd like to send a nice tweet on January 6 saying that violence is bad:

Grisham [...] confirmed in her memoir of her time in the White House that she sent Melania Trump a text that said, "Do you want to tweet that peaceful protests are the right of every American, but there is no place for lawlessness and violence?" to which Trump replied with one word: "No."

Grisham sure does know a lot about these garbage humans. We're sure she was mighty helpful to the committee.