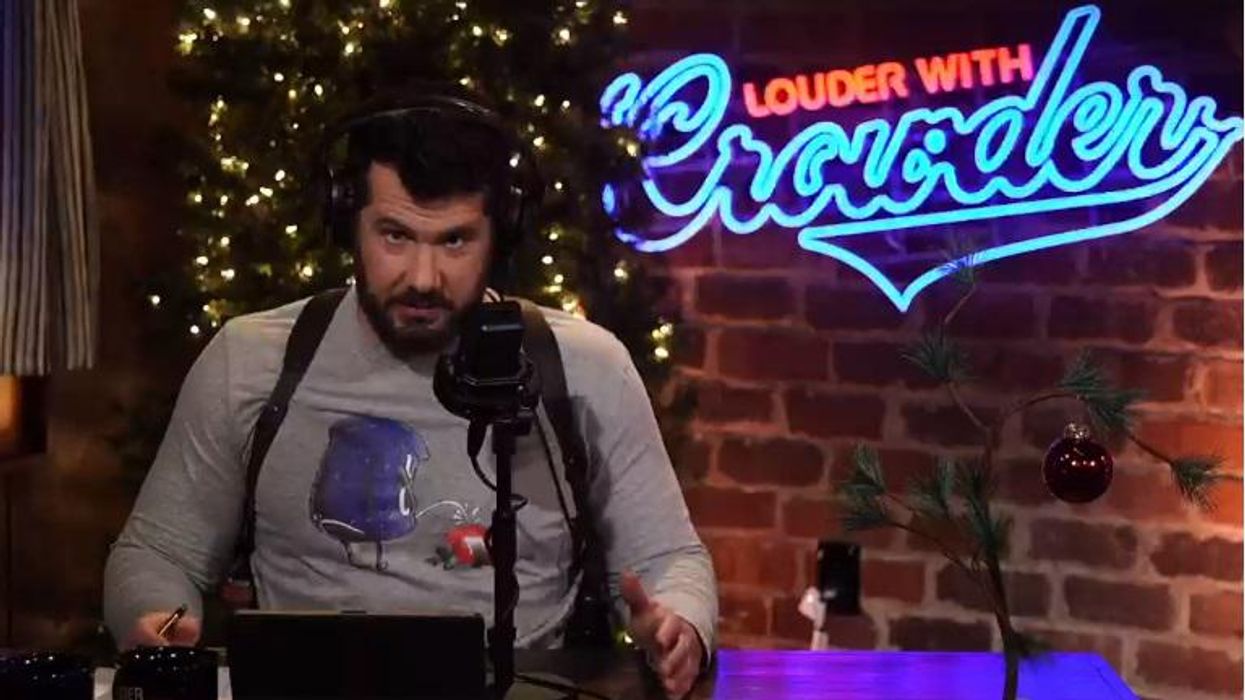 Blaze TV yakker Steven Crowder, who once criticized Chris Rock for unfairly suggesting that white people are the reason there's racism in America, was back this week to whitesplain more about racism, American history, and slavery, which he explained was absolutely not a racial thing, as long as you include the entire history of the world and not just the system of chattel slavery that evolved in the United States.

Here's the very smart third-rate rightwing talker bloviating on Monday's edition of his show, via Media Matters. If you'd prefer to not watch, we fully respect that!

Crowder started off with his own scientific observation that all people can have racial stereotypes of other groups, which he then spun into his personal theory that Black people probably are a lot more racist against white people because foolish Black folks only know about white people what they see on TV, and TV is relentlessly anti-white. Yes he really says that, because it's certainly not like Black people ever have any day-to-day interactions with white people in the workplace and out in the world.

And I do think, actually, that we're probably at a point where it happens more — you probably have more Black people right now, because of what they're being fed by the media, who have a preconceived, incorrect, negative idea of what white people are than what white people, maybe, have of Black people. I don't know. Maybe it's a fifty-fifty split, but it certainly is something all groups can be racist. And the Left just argues, yeah but only one can be systemically oppressive.

Oh, but about that whole "systematic oppression" thing: That's fake too, because, Crowder explains, slavery happened in many more places in the past than just in America, and in some cases, even white people were captured into slavery, like by the Barbary pirates and the Moops:

Do you guys know how many slaves there were in the north African, sort of Mediterranean slave trade? Do you know how many? It was a million. It was a million slaves. Right? People who lived in the Mediterranean coast, they were at risk. You guys know about the history of North Africa, the Moors. And by the way these were — they were kidnapping white people. Just to be clear. This is not something —

You see where he's going with this: How can American Black people make such a big deal about the supposed effects of slavery when there's been slavery all throughout history, huh? It's some deeply dishonest stuff, because for starters, the history of "slavery in general" is largely irrelevant to the particular ways the American version affected America. Look at this prick, insisting that because slavery worked in many different ways in world history, American slavery was just one variation among many, but nothing all that remarkable.

Slavery is not something that has been racially based. Ever. Now, it was codified into law because most slaves at a certain point in the United States were Black. But you can look at other countries where they decided, oh, ok, now we're going to try and ensure that we maintain control over these slaves. And so, therefore, you look at what are the majority of slaves? Alright, we determine them then by skin color, or ethnicity, or wherever they come from — you know, Indian people were enslaved. There are still people who are enslaved in the world today.

The rhetorical trick is to never focus too closely on how slavery was actually practiced in the United States, because then you'd have to note that it wasn't just happenstance that "most slaves at a certain point" turned out to have been human beings captured and stolen from Africa. Crowder's just-so version seems to imagine that enslavers just looked around one day and suddenly realized everyone they'd enslaved were Black, and that's how it became rooted in race. Utter bullshit. But he says it loudly and emphatically, so it must be true. There's more, and again, look at the very careful phrasing:

Look, slavery is not uniquely American, it was never uniquely American, it still exists outside of the United States of America. Slavery was never racially motivated, to be clear. It happened in large numbers, to the tune of millions — Black people enslaving white people, as well. And it's wrong across the board. The United States is singularly unique in, however, recognizing and ending slavery because it was incompatible with the Constitution and the Bill of Rights. That is unique.

Wasn't that nice of the USA, to decide as one that it was wrong, and to end it, after which it became irrelevant? Also, the US was well behind a bunch of other countries in abolishing slavery, so say goodbye to that lie, too. As Crowder continues, he makes clear he thinks the wiggle words about its incompatibility with the Constitution and Bill of Rights makes US abolition "singularly unique," because no other country has "all men are created equal" in its founding document.

Get out of here: Claiming that US abolition is unique because it resulted from the US's fundamental principles isn't just an obvious tautology, it also suggests a tidiness that's utterly divorced from historical reality. Lincoln initially limited Emancipation to the Confederate slaveholding states, while slavery continued legally in a handful of Union states until the adoption of the 13th Amendment.

In any case, Crowder has it very deliberately backwards: No one says that the US was unique in having slavery. Rather, the form of slavery practiced in the US truly was quantitatively and qualitatively unique. It was a fully American, totalizing system tied directly to the growth of American capitalism and the nation's wealth, and relied on the permanent generational enslavement of a class of people, defined by race. (Say what you will about the Barbary states, their captives' children weren't born into bondage.) It was race-based virtually from the beginning, and yes, rather more important to the shape of today's America than whatever was going on with Roman slaves.

Also too, in Crowder's version of history, we guess Jim Crow was more of a regrettable accident than a matter of white supremacy.

In conclusion, what a complete idiot liar Crowder is, the end.

Yr Wonkette is funded entirely by reader donations. If you can, please give $5 or $10 a month to help us clean up historical lies as they hit the floor.