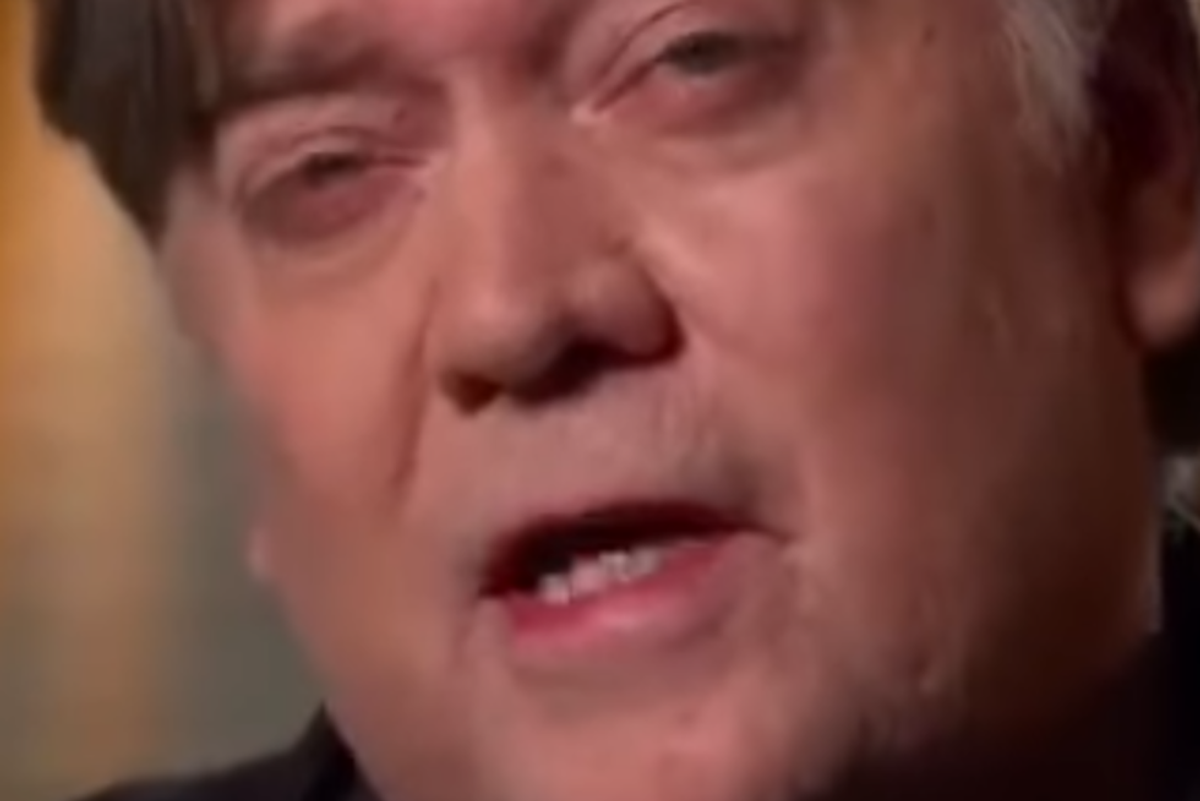 It's been a wild day for the January 6 Select Committee, with Trump Chief of Staff Mark Meadows officially flipping them the bird, the DC Circuit Court putting a temporary hold on disclosure of presidential records, and UPDATE as of 4 p.m., a grand jury indictment for Steve Bannon, whose own middle finger to the Committee is finally being answered.

From the Justice Department, the indictment:

Stephen K. Bannon was indicted today by a federal grand jury on two counts of contempt of Congress stemming from his failure to comply with a subpoena issued by the House Select Committee investigating the Jan. 6 breach of the U.S. Capitol.

"Since my first day in office, I have promised Justice Department employees that together we would show the American people by word and deed that the department adheres to the rule of law, follows the facts and the law and pursues equal justice under the law," said Attorney General Merrick B. Garland. "Today's charges reflect the department's steadfast commitment to these principles."

In its subpoena, the Select Committee said it had reason to believe that Bannon had information relevant to understanding events related to Jan. 6. Bannon, formerly a Chief Strategist and Counselor to the President, has been a private citizen since departing the White House in 2017.

Each count of contempt of Congress carries a minimum of 30 days and a maximum of one year in jail, as well as a fine of $100 to $1,000. A federal district court judge will determine any sentence after considering the U.S. Sentencing Guidelines and other statutory factors.

As expected, Mark Meadows — following Bannon's example — failed to appear for subpoenaed testimony at 10 a.m. today. Yesterday his lawyer George Terwiliger III put out a statement insisting that his client is immune from congressional subpoena based on opinions drafted by the Office of Legal Counsel. This was despite being informed by White House Deputy Counsel Jonathan Su that President Joe Biden wants his client to testify, according to the Washington Post.

Contrary to decades of consistent bipartisan opinions from the Justice Department that senior aides cannot be compelled by Congress to give testimony, this is the first President to make no effort whatsoever to protect presidential communications from being the subject of compelled testimony. Mr. Meadows remains under the instructions of former President Trump to respect longstanding principles of executive privilege. It now appears the courts will have to resolve this conflict.

Which is true as far as it goes, but that's not very far, since those opinions pertained to claims of executive privilege by a sitting president. Here in the year 2020, Donald Trump is out of the White House, and Joe Biden said he's not asserting privilege, so Meadows is on shaky ground. And not for nothing, but OLC memos aren't law, and Congress doesn't give a shit about them.

Indeed, as Committee Chair Bennie Thompson wrote to Terwiliger yesterday, White House staffers routinely testify to Congress under subpoena: "You also acknowledge, however, that Congress has successfully obtained information from 'senior Executive officials over the past two centuries,' as you must, because there is a long history of senior aides providing testimony to Congress without upending our constitutional system."

Anyway, you can't just refuse to show up at all or turn over any documents, because FFS that's not how any of this works. Witnesses have to attend the hearing and assert privilege as to particular questions, and they have to produce a privilege log detailing any documents they have which are responsive to the subpoena, and asserting a specific privilege over each individually. Meadows has done neither.

There was also this fun little Easter egg in Thompson's letter:

Your search for responsive records should include (but not be limited to) any text messages, emails, or application-based messages associated with the cellular phone numbers and private email address the Select Committee has identified. If Mr. Meadows has records that you believe are protected by some form of privilege, you must provide the Select Committee a log describing each such record and the basis for the privilege asserted. [Emphasis added.]

It sure looks like the Committee already knows that Meadows used private email and some web app like Signal or Snap to plan the January 6 rally. So perhaps Attorney General Merrick Garland can follow up his indictment of Bannon just minutes ago with one for Meadows as well, since it pertains to private communications with third parties which are clearly outside of any realistic claim of executive privilege.

Meanwhile, Trump won a temporary reprieve last night when an appellate panel from the DC Circuit temporarily blocked the National Archives from handing presidential records over to the Committee as scheduled today. I've written about this at length here, but the short version is that Trump has drawn the worst possible panel to hear his case, and they've set a briefing schedule that makes Virginia's "rocket docket" look like a Go Kart race.

Judge Patricia Millet, an Obama nominee, ruled against Trump when the Circuit Court heard the Mazars case regarding his personal business records. And if she didn't buy that Trump could assert executive privilege over his personal tax returns, it's a safe bet she's not going to accept it over official presidential records in the hands of the National Archives. She's joined by Judge Ketanji Brown Jackson, who was appointed to the District Court by Obama and elevated to the appellate court by President Biden. Judge Jackson rejected Don McGahn's claim of executive privilege as a former White House employee two years ago. (How you doin', Mark Meadows?)

They're joined by Judge Robert Wilkins, another Obama appointee. So, all in all, not what Old Man Delay Tactics had in mind.

Trump had hoped to get a temporary injunction on disclosure and then maybe a hearing after the holidays, or a speedy denial, after which he could punt to SCOTUS. What he got instead was a full briefing over the next two weeks, followed by a hearing on November 30. Presumably the court will render a fully considered opinion in very short order, mooting his argument that no appellate court has considered the argument on the merits. And in case it's not fully clear, his argument is that the former president's claim of executive privilege matters more than the sitting president's waiver of it — which is patently bullshit.

When, not if, Trump appeals to SCOTUS, there will be a much stronger record than if the appellate panel had just issued a denial of his request. It will be a fully briefed opinion, crafted to withstand Supreme Court scrutiny. And if that opinion is upheld, it will have precedential value for future assertions of magical ex-president privilege.

Yes, it is annoying that the first tranche of documents was not disclosed today. But keep in mind that there are many, many more documents coming, and the Presidential Records Act requires a 30-day lag time between notifying the former president that his records have been requested and actual disclosure. The second tranche wasn't scheduled to go out until November 26, and there is at least one more in the hopper, with multiple future disclosures to come.

It's always possible that the Supreme Court will throw itself on this grenade, but that seems rather unlikely. The Court's conservatives spent their whole lives in thrall to the theory of the unitary executive, and now Trump wants to argue that there are actually two of them? Also, the one that's farting around on a golf cart is more powerful than the one sitting in the Oval Office? Is Brett Kavanaugh going to allow Biden to sit in Wilmington and thwart congressional investigations into Hunter Biden's laptop?

Come the fuck on.