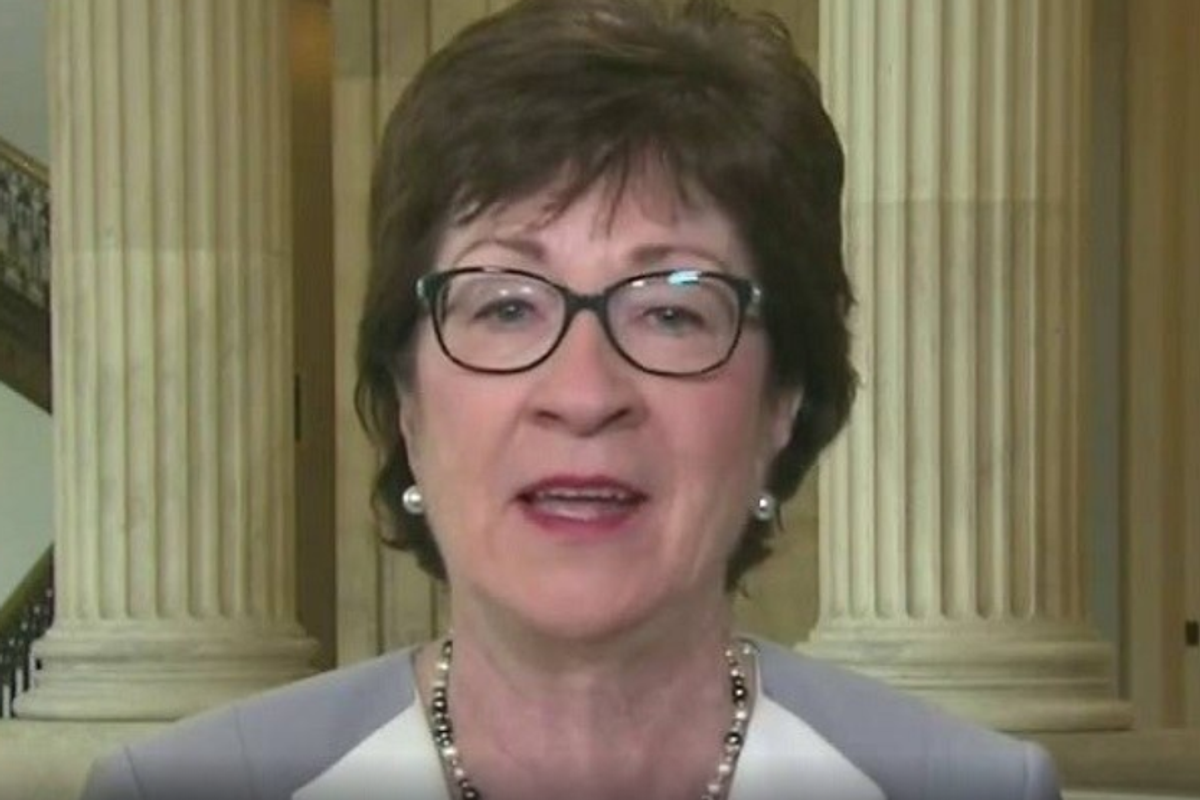 Kids, you may be understandably worried about the fate of American democracy on this anniversary of the kinetic portion of the Republican attempt to overthrow the Republic. But not to worry! Even though the GOP is dead-set against passing any sort of real election reform that would prevent states from voter suppression, gerrymandering, or outright rejecting the actual outcome of the vote, you'll be delighted to know that Sen. Susan Collins (R-Maine) held a conference call Wednesday evening with several other Senate "moderates" to discuss how the two parties might come together and protect voting rights, according to nonprofit news outlet The 19th. You know, in a very limited and moderate bipartisan sort of way that doesn't rock the boat or accomplish much, probably.

Gosh, we're so cynical! The story only reports who took part in the call, according to multiple sources, while not giving any details because the sources said they weren't authorized to discuss that. Maybe this will be the first step on a bipartisan road to vigorous protections of all Americans' voting rights, and here we are just badmouthing it. We will feel so bad if that happens, and we'll be sure to apologize for our very corrosive skepticism, for sure. Nothing would please us more than eating our words because Senate moderates did something wonderful for democracy. For now, we'll stick with these croissants, which are surprisingly good for a supermarket bakery.

The 19th notes that the moderates' conference call came at what sure looks like a low point for the prospects of passing the two big Democratic proposals for voting protections, the Freedom to Vote Act, which would establish some basic national standards for federal elections and prevent many of the fun tricks GOP legislatures have enacted to give their own party an edge, and the John Lewis Voting Rights Act, which would restore the Justice Department's ability to review new state voting changes for fuckery before the changes go into effect.

The call occurred just hours after Senate Majority Leader Chuck Schumer told Politico that he had “very little hope” for a bipartisan deal on voting after months of delays. Republican Minority Leader Sen. Mitch McConnell of Kentucky told the Washington publication that it was “worth discussing” changes to the Electoral Count Act, or ECA, a 1887 law that enables congressional lawmakers to contest the results of elections.

According to the insiders who spoke to The 19th, those on the call with Collins included Republicans Roger Wicker (Mississippi), Thom Tillis (North Carolina), and Mitt Romney (Utah), plus Democrats Joe Manchin (West Virginia), Kyrsten Sinema (Arizona), and Jeanne Shaheen (New Hampshire).

Of the bunch, only Shaheen has said she'd be open to reforming the filibuster, although we should also note that Manchin has flirted with saying maybe the process could be nibbled upon, only to consistently back away from a firm commitment of any kind.

So what about this idea of reforming the Electoral Count Act? Numero Uno: It needs serious reform, since the ECA was the mechanism Trumpworld wanted to exploit last year, arguing that nothing in the Constitution or the ECA actually prohibits state legislatures from replacing voters' choices with a slate of partisan electors. But Numero Two-o: ECA would only address fuckery with certifying the electoral vote for president every four years, while ignoring all the other ways Republican state legislatures are trying to subvert democracy, like gerrymandering, limits on absentee voting and voter registration, and of course taking control of local elections boards for ginned up partisan reasons.

ECA reform is both worth doing and no substitute for really fixing our fucked up system. And if Mitch McConnell is praising it, it's clearly a distraction. Sure, let's set the broken leg, but that sucking chest wound is why the patient is in the ICU.

Reasonably enough, the nice voting rights enthusiasts at End Citizens United say no thank you, and that if anything, McConnell's seeming support for ECA reform is a sign that he's getting worried again that Democrats may finally be getting close to genuinely reforming the filibuster.

As to the actual contents of last night's conference call, no real details, sadly; The 19th reports that

Modernizing the ECA was one of the topics discussed by the bipartisan group of senators Wednesday. There was a “strong determination” among the group that there must be action, one source said. They, like all who spoke to The 19th about the meeting, were not authorized to speak on behalf of the lawmakers present and did not provide additional details.

Sure sounds like a real barn-burner of a discussion to us!

Guess we'll just have to wait and see what develops over the next week and a half, and hope that Chuck Schumer goes ahead and puts filibuster reform and voting rights legislation to a vote right after MLK Day — or maybe on the day, for symbolic purposes.

Yr Wonkette is funded entirely by reader donations! If you can, please give $5 or $10 a month so we can keep you up to date with all the big, very deeply concerning news. (Aw nuts, we tried.)